This is my very last post about the Cumbrian Coast Line, I promise.  Once I've done this I shall file it away and never speak of it again.  We can go back to obscure stations in the back streets of Manchester and knob gags. 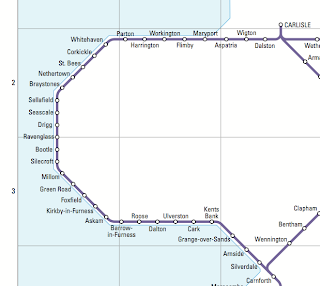 Places I'd visit again tomorrow: Ulverston, Barrow-in-Furness, Whitehaven
Places I'd go back to if I had nothing better to do: Ravenglass, Millom, Wigton
Places it would require an Act of Parliament to get me to revisit: Parton, Seascale, Parton again

Facts learned during this trip:
The journey in full:

Northern Rail really need to sort that appalling map out. "We don't run it so we will ignore it and pretend it doesn't exist" (referring to the WCML, Windermere branch etc) is childish, unhelpful and the sort of thing I thought the privatised railway had grown out of.

By the way, what did you do ticket wise, is there a Rover?

It was a four in eight Freedom of the North West Rover, plus a single from Liverpool to Barrow on the Sunday. Well worth the money!