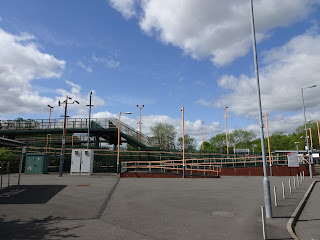 If we took a holiday

Took some time to celebrate

Just one day out of life

It would be, it would be so nice

The BF persuaded me that a break in the countryside would be nice after all these months of virtual house arrest, so we booked a little cottage on the edge of the Cotswolds.  Was I more amenable when I spotted the location was near the bottom of the West Midlands Railway map?  That's an appalling accusation, how dare you, please don't tell him.

The cottage was in a place called Armscote, and the nearest town was Stratford-Upon-Avon, somewhere neither of us had ever visited and which demanded a day trip.  We'd driven down there initially.  I say "we"; I don't drive any more, because I'm pathetic, but the BF loves it and is happy to plough his way through motorways and back roads while I doze in the seat next to him.  I suggested that rather than driving into town and trying to park, we instead take the train in. 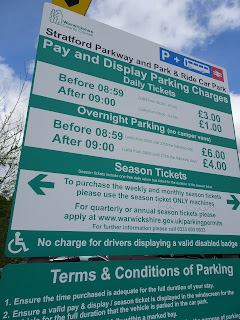 I'd briefly been to Stratford-Upon-Avon Parkway before; when I'd visited Claverdon station I'd worked out that if I jumped off the train here and ran to the opposite platform I could get an earlier train home.  It is exactly what you'd expect from a Parkway station.  Accessed from a bypass, on the edge of a new estate.  Two platforms, a lot of ramps, acres of tarmac for cars.  It shares its facilities with the council's bus park and ride. 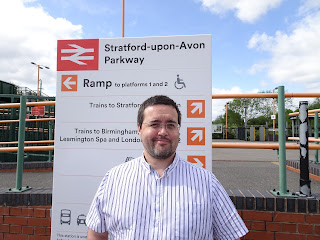 Having a second person present meant the sign shot contains a bit less nose hair than usual.
We'd timed it just right, arriving at the platform moments before a West Midlands Railway train came into the platform.  The BF was impressed by the train, for the record. 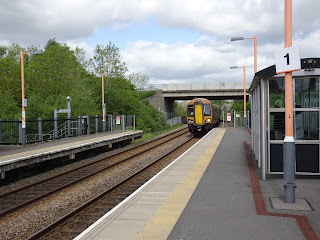 A quick scoot down the line and we terminated at Stratford-Upon-Avon itself.  Again, I'd changed trains here before, but I'd deliberately kept my head down; I didn't want it spoiled for me.  I was pleased that a Ye Olde Chocolate Box town like Stratford had a proper Ye Olde Chocolate Box station; Victorian ticket office, wooden awnings, GWR ironwork on the benches. 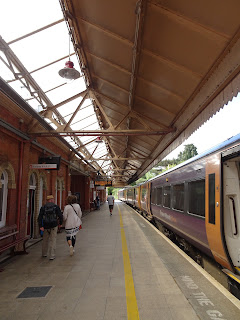 Indeed, they actually had signage boasting it was a heritage station with a fake British Railways lozenge. 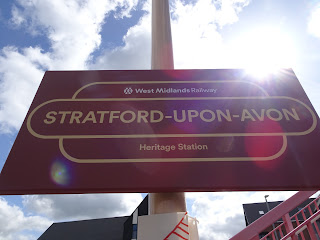 I was also delighted to spot some preserved light fittings. 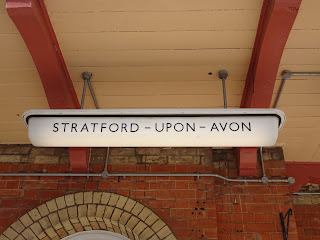 There was a toilet, which I took advantage of, and a ticket office with a big picture of Celia Johnson and Trevor Howard in Brief Encounter in it.  I'm not entirely sure why.  It was, famously, filmed at Carnforth station in the north of England, and it was set in the London suburbs.  Neither actor was from Stratford either.  Perhaps it's there to get the American tourists excited - for some reason, Shakespeare didn't write much about the railways.  He missed a trick.
Outside, I pressganged the BF into taking the sign pic, and here's where things started to fall down.  I'm used to doing things my way on train trips.  It's just me, snapping away, doing what I've done a thousand times before.  Once you introduce another person it becomes complex.  Which is why the first picture he took of me didn't even have the sign in it.  As they say, you had one job, etc.  He finally managed to take one that managed to fit in both the lengthy station sign and my massive stomach and we headed into town. 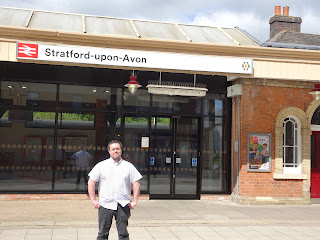 This is where we hit another disadvantage of me being accompanied.  If I'm on my own on a train trip, it's me and my thoughts.  From the first minute I'm effectively writing the blog post.  That's interesting.  That's unusual.  Listen to what those people are saying.  It's all filed away in my head and then it comes flooding out again when I'm sat at my keyboard. 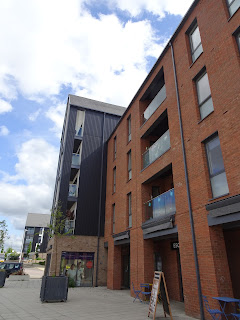 When there's someone else present, though, it becomes less clear.  Suddenly I'm chatting and laughing and sharing the experience.  I'm distracted.  My memory retains things rather than "amusing graffiti on a bridge".  As a result this is a blog post about Stratford Upon Avon that will be a lot less structured than usual.  It's less a geographic procession - a passage from one place to another - and more a sense of the town. 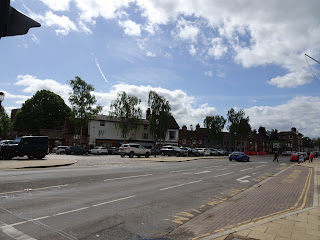 I will apologise to Stratford right up front.  I'd braced myself for the worst.  After all, it's a town famous for producing the greatest playwright in history, and attracting tourists from all across the world for centuries.  I expected it to be a tacky nightmare, slathered with Shakespeare, a constant stream of Othello Pick And Mix and Titus Andronicus Stationery Supplies and The Coriolanus Dance Club and Supper Bar.  I thought it would be like Oxford Street, or, a little closer to home, Mathew Street in Liverpool; gewgaws and tat, people grabbing at you as you pass to get you into their overpriced café, hawkers and dodgy types. 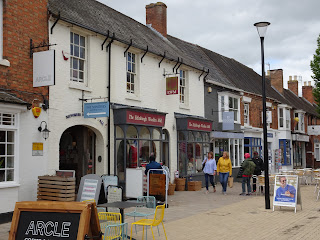 It wasn't entirely free of those distractions - there was an eatery called The Food of Love opposite Shakespeare's Birthplace, and it plays host to a branch of my retail nemesis, the Edinburgh Woollen Mill - but in the main it was simply a small Warwickshire town that happened to have an astonishingly famous son.  They're proud of him, they exploit him to a certain extent, but in the main Shakespeare is just one of the great things about the town.  I fully acknowledge that this may be a very different experience on a Saturday in August. 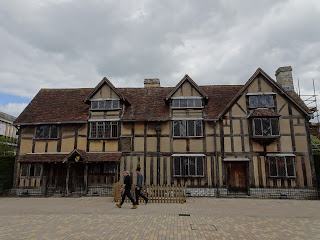 So yes, there's Shakespeare's Birthplace, in the centre of a charming pedestrianised high street.  Foreign tourists gathered with their camera phones, smirking in front of the half timbers, no doubt dropped off at the delightfully bathetic Shakespeare's Birthplace Coach Museum up the road.  I took some photos of course, but I was slightly distracted: walking down the street was a man in a gimp costume.  Nobody else paid him any attention.  I mean, why would you: it was a man in head to toe rubber in a country town.  The Americans probably thought he was a street entertainer and tried to chuck him a quid. 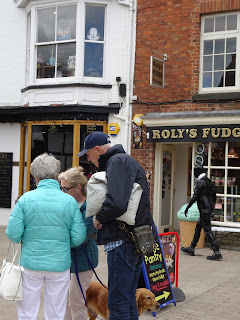 The BF managed to drag himself away from a shop that sold Christmas decorations 365 days of the year - my actual hell - so that we could walk down to Bridge Street and, from there, the river.  We passed a statue of Shakespeare on the way.  This is where they've gone a bit overboard in Stratford: the statues.  We'd already seen one of Laurence Olivier dressed as Henry V on the bypass, and there was a jester at the top of the road.  Later we'd encounter one of Young Shakespeare, raising the idea that they'll do one for every stage of his life, with proposals for another of Baby Shakespeare and one of Shakespeare's Dad With A Bit Of A Twinkle. 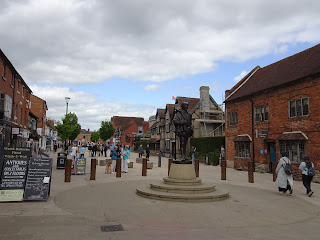 We passed a shop called Much A Shoe About Nothing - ok, I like that one - and reached the canal basin at the bottom of the street.  Barges were moored to sell ice creams and beers to passing tourists, while the banks had been laid out in long lawns leading up to the Royal Shakespeare Company's theatre.  It was warm and bright and delightful.  In the water, a pair of swans had brought their cygnets for the children to feed.  It occurred to me that those baby swans would be so well supplied with food they'd never learn how to do it for themselves and they'd fly off to start their own families and starve because there weren't any passers by chucking them grain. 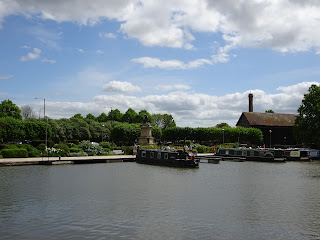 We watched a barge come through the lock then walked into the RSC for a look.  I'm not an especially huge fan of Shakespeare - I appreciate the plays as a whole, and I acknowledge they're great, but I wouldn't break my neck to see The Winter's Tale or anything - so the idea of seeing a play wasn't really appealing.  Instead we poked around the gift shop, a mass of tea towels, mugs and coasters slathered with every possible quote you could think of. 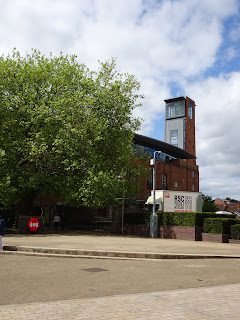 Beyond we followed a narrow street that shadowed the river, past The Other Place - the RSC's smaller, artsier brother - and past cottages that were almost too picturesque to be real, like they'd been constructed for a theme park.  There was a series of old fashioned lampposts on the street, and about halfway along we realised they'd been donated by cities around the country.  Obviously we hunted out the Liverpool one. 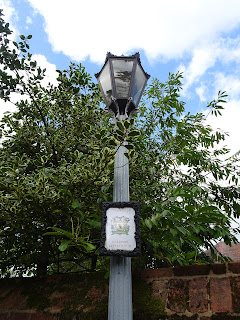 It was early afternoon, time for lunch, so we walked back towards the town, past a school that Shakespeare himself had attended.  His schoolroom was open as a museum after eleven, as they had classes in there before that, and imagine the pressure of having an English lesson in that classroom.  You'd hesitate before you handed in your creative writing in case Bill's ghost popped up to tell you it was rubbish. 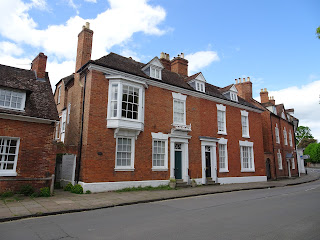 If I'd been on my own, I'd have got a sandwich from the Boots meal deal and eaten it on a bench, but there were two of us so we went into Edward Moons brasserie for a filling and incredibly rich lunch.  We were on holiday, and it's widely known that calories consumed while you're on holiday don't count. 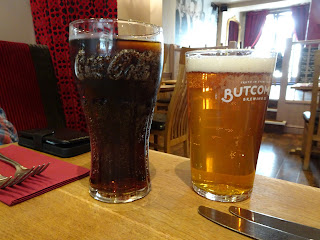 Yes, I was the one who was on the beer.  The combination of that and the duck leg with dauphinoise potatoes left us feeling stuffed and lazy and so we meandered back into town slowly,  popping into a shop here and there, snapping photos. 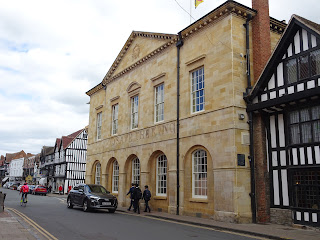 We decided not to pop into a pub for a pint of Shakesbeer, as advertised on the blackboard outside, and instead headed for the station.  I'd come up with a suggestion.  The station after Stratford Upon Avon Parkway, Wilmcote, had always been a bit of a problem for me.  It was in the middle of nowhere, basically, accessible via roads without pavements, and a bit inconvenient to walk to or from.  My idea was that the BF would get off at Parkway, pick up the car, then collect me from Wilmcote - enabling me to do the three stations at the bottom of the Shakespeare Line.  He agreed, after first making sure he knew where he was going.  I paused outside Stratford station to take a proper sign pic: 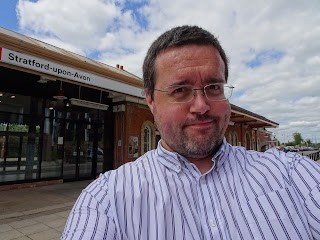 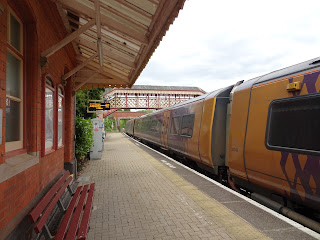 Wilmcote turned out to be delightful, a proper old-fashioned station that had been preserved but not too much.  It still felt like a working station, not a museum exhibit.  The signs on the platform informed me that this was the home of Mary Arden's Farm; Mary Arden was Shakespeare's mother, and it's maintained as a traditional farm for tourists to visit. 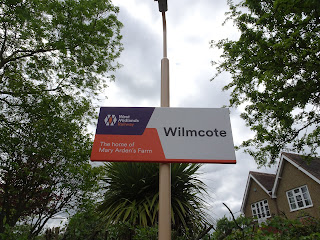 Can I say that, while I applaud West Midlands Railway putting attractions on the platform signs, it doesn't exactly leap out at you?  Merseyrail does two metre long Attractive Local Feature boards with a big coloured illustration that practically beg you to jump off and explore.  These are more "hey, have a look, but we totally understand if you're here for something else." 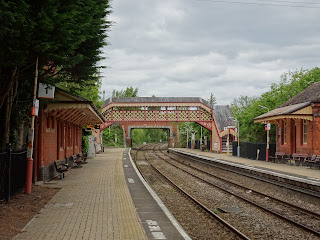 I walked up to the street and waited for the BF to arrive; the train had easily beaten him.  The bottom of the line was now completed on the map, which was satisfying, but more than that I'd had a nice day out in a lovely town.  Now I needed a little nap. 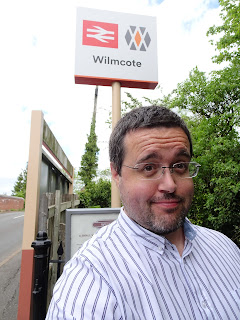