I went out last night, going to the Fact to see a documentary about Deep Space Nine with Robert because I am the coolest.  On the train home I took the small sideways seat that's tucked in the back of the carriage because it's a good spot to take when you're a lone traveler only going a couple of stops.  It left me staring at the Merseyrail map - sorry, the Local Rail Network Map as it is now called.

I became fixated on one particular quadrant of the map, over on the right, for the simple reason that it's awful.  It's the spot on the West Coast Main Line where the branch via Buckshaw Parkway branches off to head towards Bolton, and it looks like this. 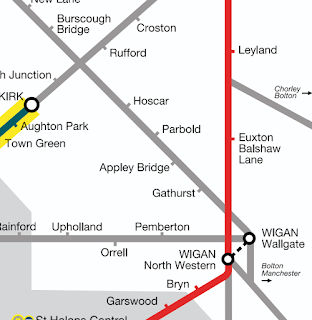 For one thing, it's so random, you could quite easily do without it.  That drop away from beneath Leyland is the entire extent of the line - there's not even a station on it before it vanishes off the edge of the map.  Secondly, it's at a weird angle.  For some reason, the designers have put it at sixty degrees from the vertical.  The traditional rule of transit maps is forty-five degree diagonals and it's a rule the Merseytravel map follows, with a single exception: the line from Wigan to Huyton.  You can see the top of it there.

I'm not sure why the designers went with sixty degrees here.  There's no need for geographical accuracy, because it's a barely existent spur.  It never even used to be shown on the map.  (Besides, the line pulls away from the main line in a gentle curve).  The other problem is its closest diagonal is a forty-five degree angle.  The Wigan-Southport line is a straight diagonal and it would be so much more pleasing if the Buckshaw line followed it.  Instead, it drifts.  I've marked it up with a series of arrows to show you what I mean.  Each of these lines is the same length. 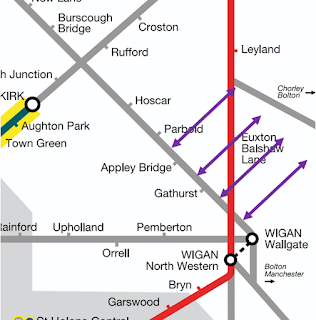 Do you see what I mean?  It sort of wanders away.  Instead of paralleling the Wigan line (and the Manchester line below it) it goes off.

It's a tiny detail but I couldn't stop staring at it.  It's attention grabbing in the worst way.  One tiny fix and I wouldn't have noticed it.  Instead it's unnecessary ugliness.

Unless of course I'm overthinking things again and nobody else cares.  This is also possible.
Posted by Scott Willison at 17:14 1 comment:

Regular readers (hello you!) might have noticed that things have gone a bit quiet round here.  Since March there have only been three new posts, and only one of those actually involved me going and visiting some stations in the West Midlands.

It's not good enough.  I know that.  And I can only apologise if you're paying attention to this blog.  Though now I've written that, can I just say that I hate bloggers who say "sorry I've not posted!".  Nine times out of ten I didn't notice.  You're not that important.  Are you diamond geezer, posting something every single day, where an absence would be noticeable?  No.  Shut up.  But I am nothing if not a massive hypocrite.

I am aware that after announcing a big! new! project! back in January I've hardly touched it since.  There are two reasons for this.  The first, as a sort of background noise, is there's something big and complicated happening in my family life, which involves a lot of consultation and reading and so on.  It's a good thing - it's a happy thing - but it's also a sort of underlying hiss of stress on everything.  Also I had a holiday (Spain, villa in the mountains, lovely thanks) so that interfered with timings.

The second problem is my anxiety levels have been slowly ramping up lately.  I'm not sure why.  It means I don't really like going out much.  Leaving the house has become a bit of a trial.  I had a trip to the Midlands booked last week and that morning I woke up at 4am, tense, stressed, and certainly not able to get on a London Northwestern to New Street.  So there's that.  I'm not sure what is causing it and hopefully it'll go away.  I forced myself to go out on Monday and had a very nice day wandering round the front at Hoylake so it's basically crossing my front step that is the barrier.

So there you go.  Since I added the KoFi link I feel a bit more obligation to explain myself.  Instead of being you'll get stuff when I give it to you I'm a bit more I have a debt to pay back so I hope this makes things clear.  I do have another trip booked so hopefully that'll all go ahead and we can get back on schedule and there will be regular updates.  Or I might just crawl into the space under the stairs and lie there until I die.  One of the two anyway.
Posted by Scott Willison at 10:50 3 comments: