You don't realise how long the Cumbrian Coast Line is until you ride it end to end.  On the map, it's just a curve round the edge of the land - it looks like a fairly simple and quick trip.  That single line, with no changes or dead ends, makes your brain think it must be easy.  It actually takes nearly three hours for a train to get from Lancaster to Carlisle - you could do Liverpool to London in that time.  Boarding the train at Barrow on the last day of my trip, it was an hour and a half of travelling before I got to a station I'd never been to before: Harrington. 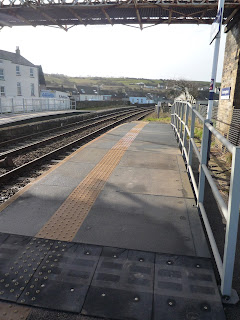 Through pure good luck I managed to alight on the station's claim to fame - the Harrington Hump.  This is a little ramped surface installed on the platform to enable easy access to the train, without the need to fix the whole station.  Harrington was the first place to have these experimental ramps installed, and subsequently gave its name to the invention. 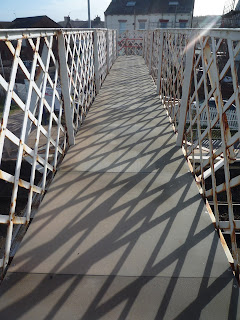 It's a tiny thing, but it's needed to distinguish Harrington from the other stations up the coast.  It is another anonymous, two platform station squeezed between the land and the sea, and therefore probably not likely to be electrified any time soon. 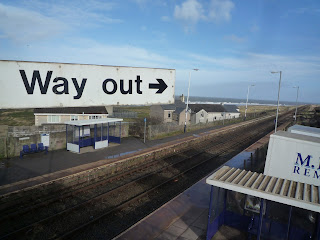 They can't even be bothered having the station name on a pole.  "Just whack it on the brickwork.  That'll do." 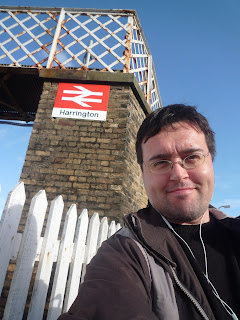 Harrington was busy, full of energy, that little bit of panic that streets get at about a quarter to nine.  Mums were hurrying kids along the street, no longer tolerating dawdling, and the traffic had that slight air of risk about it.  People were just a little bit late so they put their foot down.  I wandered up some busy little back streets to the main road for my bus.

Yep, I'd had enough of walking.  Stuff it, I thought.  It's my last day and I've walked miles this week.  I'll have a bit of a lazy day.  Plus, thanks to my decision to do Workington station the day before, I had a long, long way to go to get to my next station.

The bus seemed intent on going as slow as possible.  My train left at 9:24, and the driver must have sensed my tension.  He decided to stop at every pedestrian crossing, to let out every waiting driver, to slow down for all the bus stops on the off chance there was some tiny little old lady hiding behind the pole.  I don't care if he was "doing his job" or "being a courteous driver" - he was giving me palpitations.  At Workington bus station, he switched off the engine, got out, and wandered off to stretch his legs.  I was the only person left on the bus.  I briefly considered stealing it, crashing out of the front of the station and through traffic like Sandra Bullock in Speed, but he finally returned and chugged his way out of town. 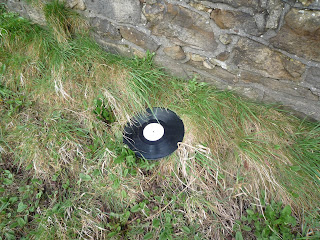 We finally reached my stop, and I practically leapt off the bus.  My deep resentment towards the bus driver and his tardiness didn't stop me from saying "thank you" as I disembarked though - I was brought up right.  I tacked along the verge towards the station, pausing only to consider an abandoned 33 in the grass.  The rain had washed away the label so I couldn't see what it was.  Given its new home at the side of the A596, I'm guessing it wasn't a mint first pressing of Please Please Me.  It did make me wonder if mp3 players had yet reached Cumbria.

Still, here was my next station. 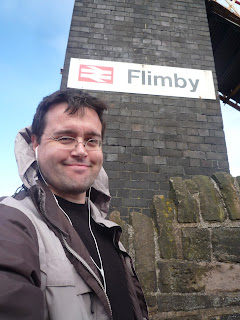 Yes, Flimby.  It turns out that it's not the name of the fifth Teletubby, but is in fact a place in the North West. Who knew? 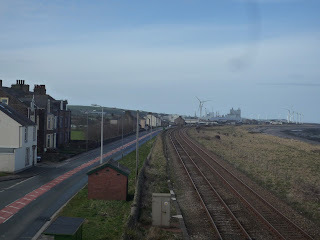 Flimby's main claim to fame, apart from its hilarious name, is that New Balance trainers are made in the village.  I seem to remember New Balance trainers were a big thing when I was at school.  I completely abstained from any kind of interest in that sort of thing.  Even if I was interested, I couldn't afford that kind of trainers anyway - I wore Hi-Tec when I was a teenager, because they were cheap and had little Union Jacks on them, which I liked.  I don't get any kind of fetishising over shoes, whether it's trainers or boots or Manolo Blahniks.  They're just going on your feet.  No-one can see them.  And they're bound to get dirty, too.  The only shoes I genuinely love are Doc Martens, and that's because they are both comfortable and practical: you can wear them with almost anything. 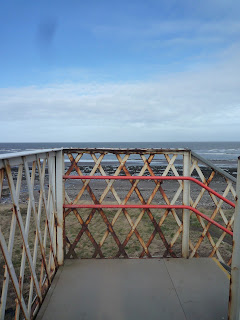 Down on the platform, I still had about five minutes before my train arrived (meaning my frustrated anger towards the bus driver was entirely unnecessary; sorry mate) so I figured I'd take a seat.  This platform shelter was a little better appointed than usual. 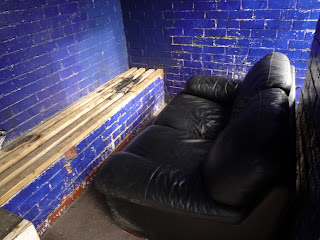 I hadn't walked round Flimby, but that leather sofa and burnt wood told me everything I needed to know about the town and, more specifically, just how little there was for the local teenagers to do after 5 pm. 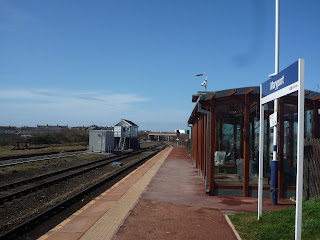 Maryport station was an odd one.  There's only one platform here, even though this whole section of line has two tracks; the trains have to pull into it, crossing over one another, which causes problems if anyone's ever late. 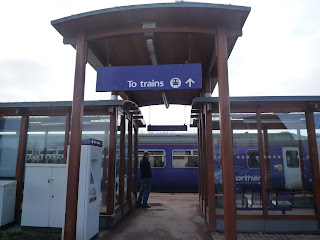 There's a nice modern building though, with a ticket machine and a couple of waiting areas.  These waiting areas smelt quite strongly of vinegar when I went in them, for some reason, so I had to leave them again, but still: nice effort. 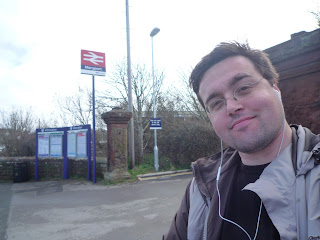 The town of Maryport, meanwhile, was thoroughly charming.  It was another Georgian development, like Whitehaven down the coast, and it still looked it; I expect they are constantly closing the high street so they can film another Jane Austen.  I didn't see any breech-clad Mr Darcys, but I did see quite a few pensioners, which is why people like reading Pride and Prejudice and not living in the real world. 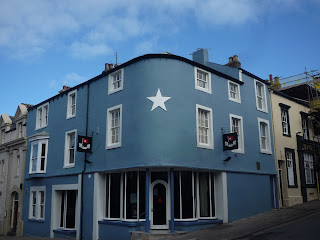 The quayside was thronged with pubs, all quiet now, but no doubt packed with happy daytrippers in the summer.  The town was now a port in name only - the deep water facilities at Workington destroyed much of their trade, and the closure of the local mines did for the rest of it.  Tourism had taken over as the town's principal source of funds. 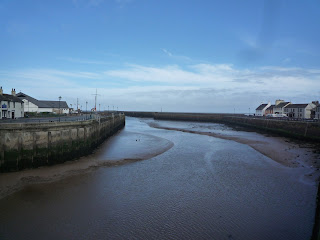 I turned back on myself in search of some breakfast.  I picked Annabell's Tea Room at random, and entered a scene harking back to the 1950s.  Mary was holding court.  An elderly lady with a wooly coat and a shopping trolley, she was sat at one of the tables on the side wall but she had turned her chair so she could address the whole room.  She was like Ena Sharples without the charm or joie de vivre.  The couple of other tables in the window had pairs of pensioners in them who seemed to have been caught up in Mary's oration; the only person, apart from me, who wasn't involved was a heavy man with a Kindle.  He stared at it determinedly, refusing to acknowledge the gossip around him. 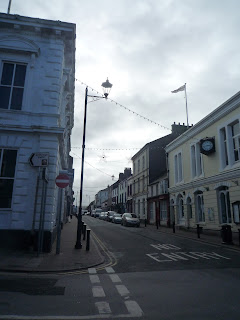 I do like to eavesdrop - it brings colour into my drab little life.  Mary was making it difficult for me with her accent and dialect.  It was a sort of Northern accent, crossed with a bit of Brummie (a kind of roll to her u) and a bit of Geordie.  She peppered her speech with words I'd never heard before, but which the locals all understood perfectly.  It was fascinating to just listen to the shape of her speech, so different to what I was used to, though the content was just as good.  Mary was laying into "Jennifer", a woman she'd shared a room with in Blackpool last year on the town's annual coach trip (like I said: it was still the 1950s here).  "Nivver again.  She was the griddiest woman I ever know."

I tucked into my bacon bap as Mary listed Jennifer's crimes.  She'd taken a bottle of wine down to the bar from her hotel room on the first night ("big green bottle..."  "Lambrini?"  "Aye, that's the one.") despite the hotel specifically barring this.  All night, she'd drunk from her shop bought bottle ("she'd go to the other side of town if she could save herself a penny") rather than pay the bar prices, causing much consternation among Mary and her fellow travellers.  Eventually, Mary had dobbed her in to the management, and Jennifer became irate when no-one else leapt to her defence.

Jennifer just isn't getting a fair deal here.  The proprietress joins in,  "She were in yar week, saying she was one of my best customers.  All she ever has is a coffee."  They also dismiss Jennifer's pretensions, since she goes and buys books from the charity shop but then puts them in a Marks and Spencer's carrier bag.

Finally Mary gathers up her things, says her goodbyes, and blusters her way out of the cafe, her trolley clattering into tables as she goes.  I hold my breath, waiting for it, waiting for the judgement.

Finally, one of the old ladies in the window speaks up.  "That Mary's a character," she says, emphasising the word character as though it were a euphemism for "Nazi war criminal".  Never change, bitchy old ladies.  Never change.
Posted by Scott Willison at 15:43

Maryport's configuration sounds frankly weird. I'm sure it made sense to someone, but goodness knows who.

Buying books from the charity shop and putting them in a Marks and Sparks bag? That is pure Victoria Wood!

I trust Harrington Station will have the courtesy to apologise for his earlier comments!

Please accept my apologies for my intemperate comments on your last blogpost. But I had thought you were giving me the hump.

Just found this site, had to comment as a Maryport local.
Maryport was the original terminus of the Maryport and Carlisle Railway. Used to have a huge station that was demolished by a council who didnt want to deal with the upkeep. Always only had one platform though. I think it used to have lots of lines for goods and coal trains. Maryport was the major port until the 30s so most coal and timber went through this station.
The town suffered badly during the Depression and with the closure of many major employers in the form of factories, Hence why it looks grand and it was, but faded grandeur now.
http://www.cumbria-railways.co.uk/Maryport2.html A picture of the original station

I am so glad to read your wonderful article. Im looking forward to read more of
your works and posts. You did a good job! Try to visit my site too and enjoy.