It's Christmas, so there's naturally hundreds of repeats on telly at the moment. I don't mind this because they're usually a better class of repeat. I spent last night chortling to a Morecambe and Wise special from 1973, which is before I was even born, but it was still fantastic. And things like The Good Life Christmas Special ("But this is the Daily Mirror") can never be shown too much as far as I'm concerned.

The BBC have been entering the spirit of things by repeating two great programmes on BBC2 of a morning. First, Wainwright Walks, where party animal Julia Bradbury (did you see her on Come Dine With Me? That girl is wild) hikes all over the Lake District. Lovely relaxing stuff, though for obvious reasons I preferred her Railway Walks series.

Right after it they've been showing the complete series of Great Railway Journeys, which I've series linked. Now I have to be honest: they're not all great. This may be a personal thing, but watching Timmy Mallett take the Paraguayan Express (or whatever) has a limited appeal for me. Yes, it's very pretty, but after a while it just becomes scenery to me. It's hard to relate to the Lake Titicaca Sleeper because it's such an alien experience. 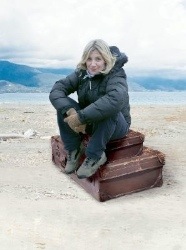 However, on Tuesday morning (the 29th December), they are showing Victoria Wood going from Crewe to Crewe. I've mentioned this before because, quite frankly, it's amazing. HRH Victoria Wood travels around the country in the dying days of British Rail, meeting drunken Scotsmen, heading to Thurso (and turning around again), and going to Woolworths to see if the Pick 'n' Mix is different to the stuff back home. It's funny, it's clever, it's heartfelt, and I strongly urge you all to watch it. It'll ring a bell for anyone who's been stranded at Crewe, or travelled on a crappy diesel out into the wilds, or has waited on a wet platform for a train that never came. Record it. Treasure it. At the very least it should help erase the memory of that awful special she did on Christmas Eve (and how it pains me to say that). At least there are no dodgy jokes about crinoline or fat people dancing for your amusement.

Email ThisBlogThis!Share to TwitterShare to FacebookShare to Pinterest
Labels: something really rather wonderful 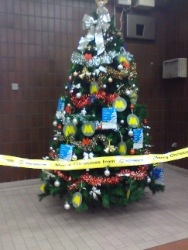 The Merseyrail tree at Lime Street, bringing a bit of festive cheer to your commute. Merry Christmas! 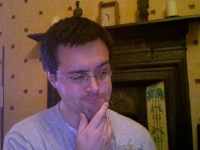 Actually, Catwoman was always my favourite Bat-villain, but if I'd put "Pussy Me This" I'd have ended up on all sorts of dodgy search results.

Anyway. There's a new website sweeping the nation (and by "nation" I do of course mean "Twitter"), called Formspring. Like much on the net, it seems to be completely pointless. All you do is ask someone a question and they'll answer it. After a while, though, it begins to get addictive, and soon everyone is swapping inane questions and getting smart arse replies.

Never one to miss a bandwagon, I've leapt on board, and you can find my Formspring page here. Feel free to ask me anything you like and I'll do my best to answer it, though I reserve the right to make sarcastic remarks, especially if the questions are a bit dirty. But I'll answer anything; Merseyrail related, train related, my shoe size, pin number, anything at all. Remember the words of the Great Sage:

"I will now take questions from the floor. I don't mind what they are. They can be as serious, intellectual, thought-provoking as you like. Yes you - the lady with the split ends..." 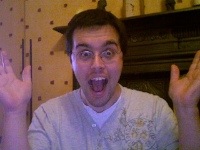 (First person to name the Great Sage gets a gold star). 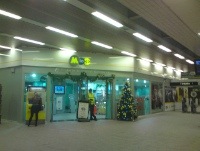 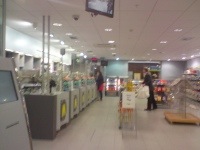 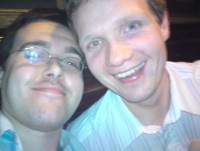 Christmas shopping: don't you just love it? Well, no actually. It's expensive, it's difficult, it's time consuming. If you go into town to buy things, you end up being wedged into queue after queue and have to spend most of your time avoiding the urge to smack various people in the face. Then you get home and find that you bought the wrong things anyway, but by that point you no longer care, so Auntie Barbara gets that Girls of the Playboy Mansion skinny t-shirt even if she is 94 because you can't be bothered going out and getting her a replacement. And then you have to wrap the bloody things, which takes about four hours, so that someone can rip the paper off in ten seconds and discard all your hard work in the recycling. Christmas shopping is clearly rubbish.

So, like many sensible people, I turned to the wonders of the internet to do my shopping. Marvellous; sat in bed in my pants buying things without a care in the world, sipping on a cup of tea and noshing on digestives. Infinitely preferable.

Until it comes to receiving the hundreds of packages, at which point the system rather falls down. So this morning, little red card in hand, I had to drag myself out in the wind and rain to make my way to Prenton sorting office to pick up my Godson's Christmas present. Since I now have the stirrings of a cold, I hope the little darling is suitably appreciative.

It did give me a chance to take a few photos of Merseyrail's possible future, however. Back when I finished the Borderlands Line, in October, I didn't really go into the electrification plans for it. It doesn't take a genius to work out that this line running from Wrexham to Bidston would be a whole lot more useful - and profitable - if the trains could carry on through Birkenhead and into Liverpool city centre. Unfortunately, since the line is diesel only - and diesel trains are prevented from running on the Loop - that's never going to happen.

Bringing the line into the Merseyrail network is a priority for Merseytravel and the other stakeholders along its length. There have been various studies into it which have concluded that yes, it would be a fantastic idea, but have you seen how much it will cost? The estimates in the last study were a lot more than anyone expected, and so everyone looked a bit embarrassed and shuffled off.

The basic plan would see the line continue as it is, just with Merseyrail trains instead of Arriva ones, calling at the existing stations. However, one new station will almost certainly be built with electrification, and that's the one at Woodchurch. This is the station site down the road from the sorting office; hence why I had all that pre-amble about Christmas, and hence why I had a look at the proposed site this morning.

The reason Woodchurch is such a priority for the new line can be summed up in one word: interchange. It has the potential to be a real boon, and possibly one of the busiest stations on the Wirral, once it's completed.

At the moment, admittedly, it doesn't look like much. 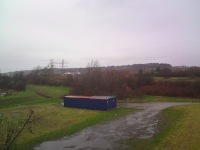 A scraggy bit of field next to the railway line, currently used by various amateur football clubs for Sunday league football. Not too promising.

However, look to the left, and you see this: 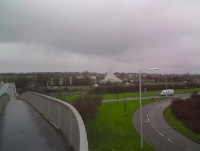 That's junction three of the M53, the motorway connecting Liverpool, Chester, and all the towns in between just about visible in the dip.

Look to the right, and you see this: 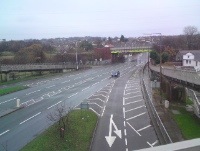 That's the A552, or the Woodchurch Road, pretty much the main east-west road on the Wirral. It runs from Birkenhead town centre, through Prenton (with Tranmere Rovers and the local shopping centre), past the Woodchurch estate before ending up at Arrowe Park Hospital. It's one of the main bus corridors on the whole peninsular, and is always busy. Apart from when I take a picture obviously. 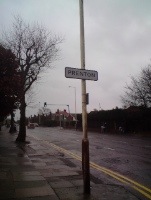 In short, stick a nice park and ride here, and you could get traffic off the motorway, traffic off the local streets, and a new bus interchange into the bargain. You'd also bring Merseyrail services to Prenton, one of the very few areas this side of the Mersey that doesn't have a handy rail service into Liverpool. Everyone's a winner baby, that's no lie.

The potential station is such a no-brainer, and such an asset, that Merseytravel have even considered just electrifying the couple of miles to reach here, terminating the Wrexham trains even further away from Liverpool. Understandably, the councils in Wales are less keen on that idea, and are working with the PTE to try and get the whole line done at once.

Given the huge costs involved, it won't happen for a few years at least. There's a debate about whether third rail electrification (like the rest of Merseyrail) is what's needed, or whether it would be better to have overhead electrification with new rolling stock capable of going on both types. Merseytravel have even floated the idea of the diesel trains terminating on the currently unused platform at James Street, and therefore not having to go through the Loop at all, as an "on the cheap" way of doing it. Whichever way it happens, it would be good to see the network expand, especially with a nice gleaming station just down the road from me...

(By the way, to get these photos, I had to walk across this footbridge: 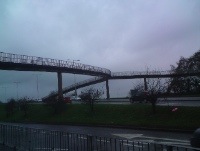 Given that I suffer from vertigo, I hope you realise the sacrifice I made for you, gentle readers. It was also blowing a gale which whipped at my coat and made me think I was about to be hurled onto the motorway. It was utterly terrifying. You see what I do for you people?)