The Once and Future Town

Birkenhead is getting regenerated!  Again!  You'll have to forgive my cynical tone.  I've lived here for more than twenty years, and worked in the town centre for five of those, and the council is always trying to find a way to improve it.
Go back a few decades and it was a thriving town, but in recent years it's really plunged downhill.  A collapse in wages, a lack of investment, the general decline of the High Street have all ripped through the community and left Birkenhead hollowed out.  There's also a curious transport-related reason for its decline; in 1986 deregulation meant buses could now use the Mersey Tunnel, meaning that you could get on a bus in, say, Tranmere and go all the way to Liverpool without stopping.  Why would you go to Birkenhead when you could stay another ten minutes on the bus and end up in Liverpool?
The result is Birkenhead is a mess, a mix of half-empty precincts, vacant plots, and collapsing buildings.  It's certainly not everything it could be.
For many years the Council was paralysed by an astonishing jealousy of their big brother across the river which meant they spent a long time trying to compete.  This is a bit like Liverpool FC playing Tranmere; yes, you're from the same place and you have similar histories, but come on, there's only going to be one winner.  More recently however they've pivoted to try and make Birkenhead Liverpool's Left Bank, the Brooklyn to its Manhattan, and this is the way to go.  The only thing better than the Liverpool waterfront is the view of the Liverpool waterfront from the Birkenhead side and at the moment that's a view enjoyed by some industrial units and the Child Support Agency.
Hence: the Birkenhead 2040 Framework, a vision of a new upwardly mobile town.  If I were a proper journalist I'd have actually covered this when you could still comment on the consultation but I forgot and that's why I'm not the new Woodward or Bernstein.  As I say, they've done this before, many times over, but this one seems to have actually got some teeth.  They've bought up large vacant parts of the precinct and have demolished them, ready for a new development of offices and apartments.  They've announced plans for a new market to replace the tatty old one, with a consultation on moving it.  They're going to knock down the flyovers at the entrance to the Queensway Tunnel to open up the land there and join the town up.
And, since this is a vaguely transport related blog, they've also chucked a load of transport proposals in there.  Obviously a lot of this is asterisked with *funding permitting, and it was conceived before the pandemic kicked the feet out from under society in general.
The big splashy centrepiece is the Dock Branch Park.  Scything through Birkenhead town centre is a former railway line which linked the dock railway to the main line to Chester.  It's been closed for decades but still exists in cuttings and beneath flyovers.  You can see it quite clearly in the satellite photos, running from Green Lane north to Corporation Road.  It goes from a viaduct over the top of the Merseyrail line into a wide open space of wasteland and former gasholders before narrowing under the tunnel entrance roads to slice under the streets of the town. 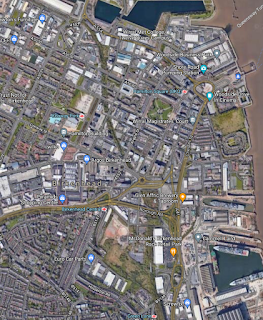 The suggestion is to turn this former rail route into a park, because of course it is.  Every town in the world wants its own High Line.  Every town looks at how New York took an abandoned railway, stuck some plants and benches on it and voila!  A whole new district, a wonderful tourist attraction, and gentrification on a massive scale. 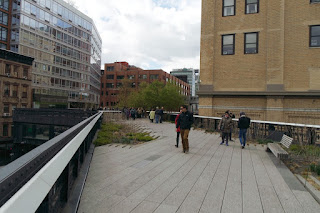 What they all seem to miss is that Manhattan is Manhattan.  It's an island that's tightly packed with some of the most expensive real estate on the planet and very little green space.  It has one big park in the middle, of course, but beyond that it's the odd square, a strip of trees, some embankments.  Just look at the bit of Manhattan with the High Line in it from above: 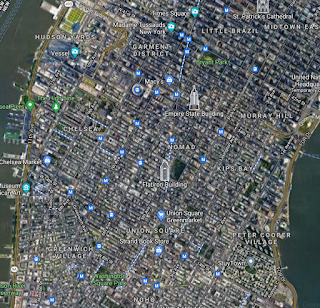 And here's Birkenhead at the same scale: 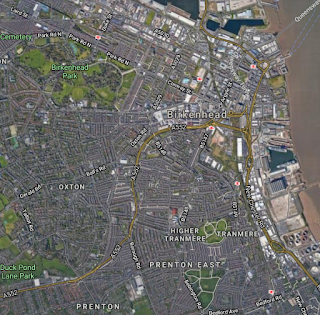 There are four big patches of green - Birkenhead Park, Mersey Park, Victoria Park and Duck Pond Lane Park - in that one image.  Just off the map you've got Bidston Hill, Bidston Moss, golf courses, recreation grounds, cricket clubs... my point is that a new stretch of park in this area isn't anything special.
Here's the other problem with the Dock Branch Park; it's in a cutting.  Cuttings are very useful for transport.  The world can carry on with their business while the trains/trams/cars go about unimpeded.  They are not, on the other hand, great places for pedestrians.  Put people in a cutting and they feel separated from the world.  They feel vulnerable.  Up there is the city, and down here is you.  It's why underpasses are getting filled in and replaced with at-grade crossings; it's why subways are hardly ever built these days.  They feel dangerous and concealed and they attract people who want to hide.  Add in a load of trees and it suddenly becomes a dark underworld. 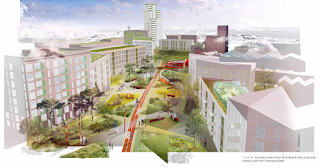 Obviously that's not what the artist's impressions look like.  There, the park is opened up and wide and also, somehow, at the same level as the buildings around it?  This is looking north from Cleveland Street and yes, that bit looks lovely.  I couldn't find an artist's impression of how this bit will look, however: 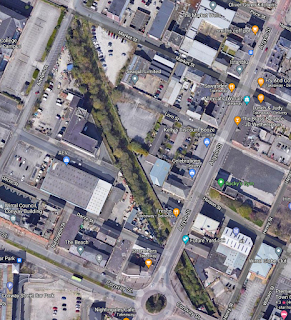 That's the narrow strip of cutting from Argyle Street going northwest and it's hard to see how you can open that out into an expansive space without wholesale property acquisition and demolition.
Here's another odd part about the proposed Dock Branch Park.  Wirral Waters, the scheme to bring the docks back to life, is slowly wheezing to life.  They're constructing offices and homes there even as I type.  Tied into all that is a concept for a "Streetcar" - a tram or similar mass transport solution which will loop round the entire district.  It's mentioned in the same Framework document: 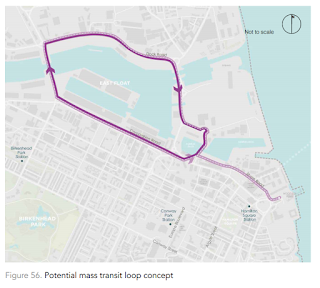 They seem quite serious about this too; a recent upgrade of the area at Tower Road was designed with provision for Streetcar stops.  Now, see that long straight line at the bottom of the loop?  That's a long stretch of track that is still in place.  It's the branch to the docks - or, to use a different term, the Dock Branch.  The same Dock Branch that is going to be turned into a park between Green Lane and Corpy Road.
Now, call me a mad fantasist, but isn't there a better use for the Dock Branch where it's used for - I don't know - public transport?  Where that streetcar loop continues onwards into town, passing close to Conway Park (for trains to West Kirby, New Brighton and Liverpool), to Conway Street (for the town centre) and ending up in the new neighbourhood being built behind Birkenhead Central (for trains to Chester, Ellesmere Port and Liverpool)?  Isn't that more sensible?  It means you won't get your fancy proto-High Line park, but instead you'll get something far more useful - a transport link between two important parts of Birkenhead.  If you wanted to be really ambitious you could extend it south, to Tranmere and Rock Ferry, or north to Seacombe, but I'm being really pie in the sky here.  Once you turn an asset into a park, people won't let go of it again; the Dock Branch will be lost to transport.
Squint at that map above and you'll see a lighter purple line.  That's the existing Birkenhead Tramway between Woodside and the Wirral Transport Museum.  There's long been a feeling that the tramway is an underused asset - there have been suggestions of extending it to the park, or along Europa Boulevard into town, but the money's never been there.  Similarly Wirral Transport Museum is a nice, ramshackle museum, clearly run by devoted amateurs, but not entirely making the best of its collection.
Hidden in the document is mention of The Transport Shed.  I did a bit of looking around and this seems to be a proposal for an entirely new museum, developed in conjunction with the Council and National Museums Liverpool.  Here's the information about it on the website of the designers.  The concept is a new transport museum, placed within the Dock Branch Park, and acting as a brand new attraction. 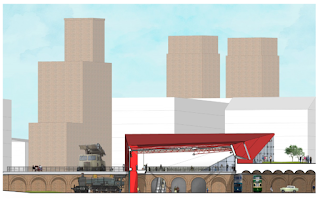 It's an intriguing idea.  Obviously I am all for a big Merseyside transport museum; the London Transport Museum is my happy place and I'd love for something similar close by.  It'd also be great if the Wirral Transport Museum's collection was opened up to more visitors.  However, there's no mention of it in the documents.  Is this a replacement, or is this a new museum filled with National Museum Liverpool's collection?  (One of the renders seems to include the Lion, the early steam train on display at the Museum of Liverpool).

I sound incredibly cynical, because that's my default option; it's hard to switch off.  I'd dearly love Birkenhead to get some love.  Liverpool has been transformed in the last twenty years and it's about time some of that sparkle crossed the river.  If the Dock Branch Park is a massive success with its new glittering Transport Shed I'll happily eat my words and I'll be first in line on the opening day.  Just do something.
Posted by Scott Willison at 11:58 1 comment: