The mob has spoken! 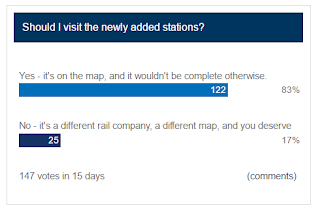 Apparently I'm doing the whole Northern map as it stands, with those extra TransPennine only stations as well.  Clearly you people are sadists.  You'd have me going until my fingers bled, wouldn't you?

The question is - when?  It turns out I've got loads on right now.  When I saw which way the wind was blowing in the poll, I booked a trip to Yarm, only for life to get in the way: the builders finalised a date for our new bathroom, and so I need to be at home.  I've had to write the tickets off.  I've got some other stuff planned as well, different trips: it's all a bit hectic.

(Incidentally this is the colour scheme for the new en-suite: 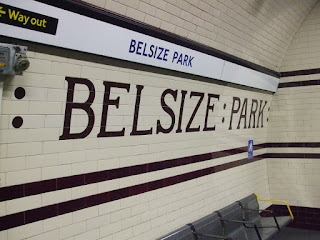 I'M NOT EVEN JOKING)

The point is: thank you for your votes, your votes are much appreciated and your continuing loyalty is touching.  But the blog updates might be a little infrequent for a while.  Bear with.

A new railway franchise means a new map.  The map for Northern - just Northern, not Northern Rail or Arriva Rail North - has appeared on the website, so obviously it's time for me to nitpick. 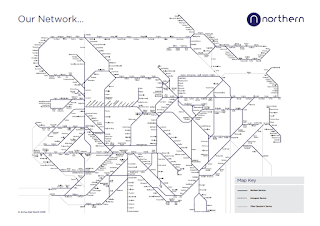 Actually, it's not a new map at all.  Arriva have taken the old Northern Rail map and converted it to their corporate colours, making it even more mauve in the process (clearly the Purple Gang were protected under TUPE legislation).  The lines are all in the same place, even the ones that were a bit problematic (ahem, Ellesmere Port). 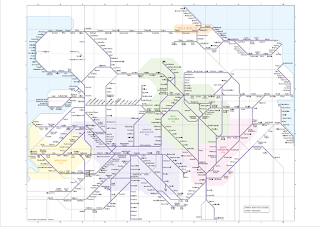 The two biggest changes are the removal of any colour from the map; the different Passenger Transport Executives have gone.  It means that now you can't see where Greater Manchester ends and West Yorkshire begins - not a problem for Northern, as it's not like their trains stop at the border or anything, but a problem for anyone using one of the regional tickets.  A Saveaway is valid to any of the stations in Merseyside, but there's no indication of where that boundary is.  You could wander from Garswood to Bryn and not realise your ticket was now invalid.

Worse, they've got rid of the sea.  Northern's franchise is literally coast to coast, spanning the entire North of England, and now there's not a hint of water.  Ports and seaside towns have lost their front.  It's an interesting gamble.  Will people mind that, say, Grimsby is now anywhere, floating in a white void, and not on the North Sea?  I'm betting they will, and the water will return in a future update.  (We've also lost the grid lines, but that may be restored on the ones in the station where you need a key). 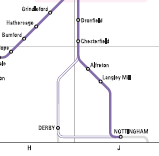 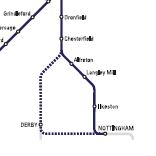 They've removed the heritage stations at Pickering and Dalegarth.  As someone who recently schlepped all the way up to the Lake District for two days of muddy walking just because Dalegarth was on the map, I'm not best pleased. 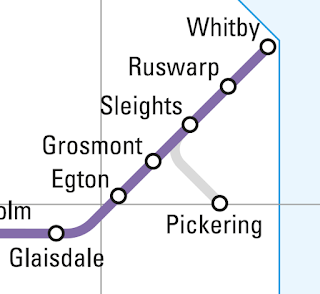 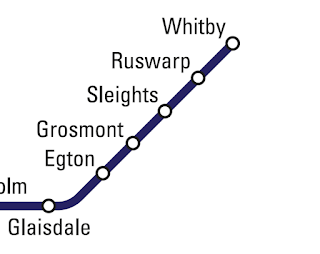 This loss has been made up for by the addition of - yes! - new stations.  The first lot are on the Windermere branch, now handed over to Northern from Transpennine Express.  The old map didn't have to show all the stations on the line, but the new one does, so that's a purple route where it once was grey and Burneside and Staveley wedged in the gap. 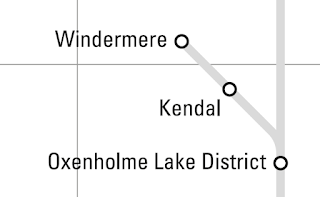 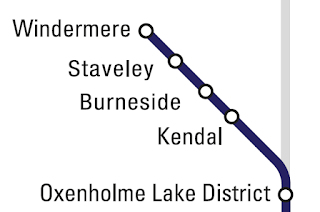 Try not to let the fact that the two new stations are in the wrong font bother you too much.

Northern have also got ahead of themselves by adding stations that are under construction but haven't been opened yet - so here's Kirkstall Forge: 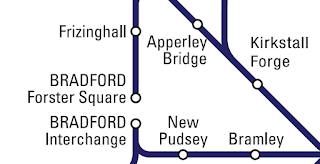 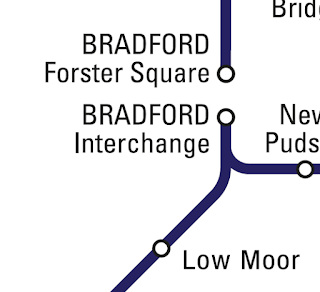 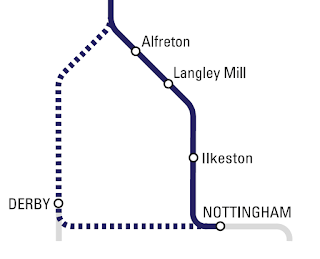 That last one's the biggest surprise, given that the discovery of rare newts at the site meant that it had been delayed repeatedly.  When I passed through the site last year there was no sign of any work underway.  Northern are clearly crossing their fingers and hoping here.

Even more surprisingly, we've got a load of stations that just weren't on the old map.

Yarm, Northallerton, Thirsk and Malton were all served by Transpennine Express and, while their lines were added to the map so that you didn't think the best way to get from York to Newcastle was via Leeds, they didn't bother sticking the stations in.  So now I have a quandry.  In total, the new map has added seven stations (Staveley, Burneside, Kirkstall Forge, Ilkeston, Low Moor, Yarm, Northallerton, Thirsk, and Malton, while removing Dalegarth and Pickering).  I've been to Stavely and Burneside.  The middle three aren't open yet.  The last four aren't served by Northern trains.  The question is: should I go to them?

As it stands, right now, I'm four stations away from finishing the old Northern map.  I was hanging around because there was a rumour Kirkstall Forge was going to open at Easter, so I thought I'd be able to get it.  But this takes the total back up to eleven, including one station (Ilkeston) which hasn't even been built yet and might not be open for months.  It's slipped out of my grasp, just a little.  I thought I'd be done by now, but I'm not, and now I'm even less done.  Part of me's glad it's not finished - this blog is fun.  Part of me wants it to be over with so I can do other things.


Should I visit the newly added stations?