As Seen On TV

The death of Victoria Wood earlier this year broke my heart.  No-one has influenced my personality and my sense of humour more than her.  As a child, I was allowed to stay up late to watch As Seen On TV: at least half the jokes must have flown over my head, but I still laughed till I cried.  My taped off the telly copies of An Audience With... and her one off playlets became lined and worn.  I got her book of sketches, Barmy, out of Luton Central Library and sat on the wall waiting for the bus reading out choice lines to my mum.  I did sketches from the book for GCSE Expressive Arts.  I even wrote about perhaps her greatest sketch, Self-Service, for my English Language A-level.


Her comedy runs through me thicker than the writing in a stick of cigarette shaped rock.  Earlier today, I saw some green moss forming at the top of our steps, and said to the BF: "we'll have to have a go at that with the Jeyes Fluid," which isn't one of her lines, but sounds like it could be.  Her language was precise, and elegant, and infinitely quotable.  Get a few gay men of a certain age round a pub table and the lines will start to drift in.  "You've a look of Eva Braun - did you know?" ...  "I said, excuse me, I was wearing leather shorts before George Foreman had a ukulele" ...  "So I leant over - tapped her on the cleavage with a pastry fork"...  "Emotional farewells, dear; they take more out of you than a hysterectomy" ... Mention Urmston and get told there's two ways to get there.  Go to post a letter and mentally hear "walk, walk, walk to the pillar box".  Spot Peter Barlow on Coronation Street and complain about when he went "off up to Scotland.  Coming back after twenty years without so much as a Scottish accent."  (It can get tiring).  And that's without mentioning her Great Railway Journey, "Crewe to Crewe", where she traveled on the Caledonian Sleeper and went to Whitby and Battersby and Carnforth and basically did this blog, only better.

The reason I'm bringing all this up isn't just a belated obituary.  Her passing prompted the excellent Network to release a box set, Wood Work, which collected together her work for ITV.  It's largely her very early stuff, before As Seen On TV, when she was still trying out her voice and her style.  There's Wood and Walters, her first sketch show, hamstrung by a deathly silent audience and co-stars who are very much not Duncan Preston and Celia Imrie.  There's also Screenplays, a collection of her three one-off plays: Talent, Nearly A Happy Ending, and Happy Since I Met You.  It's the last one that brings me to something resembling a point: the final scene is filmed in Manchester Victoria's buffet, and it was instantly recognisable. 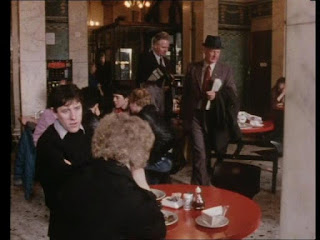 That blue and white marble is still there, now scrubbed up of course.  The tables are a little classier, now it's a craft beer emporium, but it's still definitely the same.  The same can't be said for the view in the other direction. 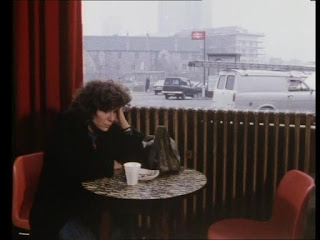 It's like a film with Albert Finney.  The big empty space outside, now filled in with the Cheetham School of Music.  Station Approach actually in use as a road, rather than as a pedestrianised route for the Arena.  Low buildings and mist.  Then that big radiator and the plastic dinner hall chairs.  This is the cafe part of the refreshment rooms, a Pumpkin when I visited back in 2014, prior to the station being refurbished with its not actually meant to be collapsible roof.  The 1981 version is very, very British Rail: 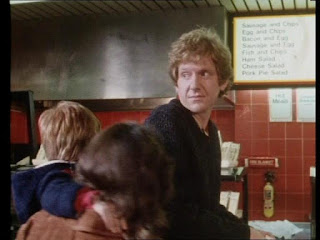 I'm fascinated by the pork pie salad - was it really anything more than a Melton Mowbray on a pile of lettuce?  It cost 94p, anyway, a very Ministry of Works price.  Fruit juices were 24p, and a cup of tea was 16p.  I like the cafeteria from a retro, nostalgia, good old days perspective, but that doesn't hide the fact that this modernist canteen had no place in that glorious marble buffet. 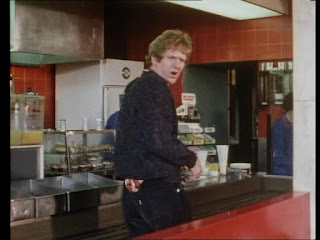 There's also an earlier scene where Julie Walters is out on the station platform and it gives a glimpse of what Victoria looked like pre-Arena, pre-teflon roof. 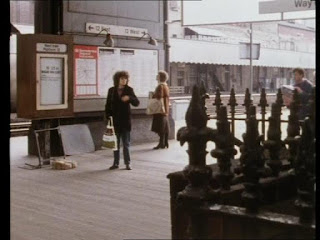 At least, I assume it's Victoria; it looks so different - there are only six platforms now, for a start.  The next departure is for Wigan Wallgate, so it does seem to be right.  But then Julie goes down some steps which lead to a subway, a bit like at Stockport. 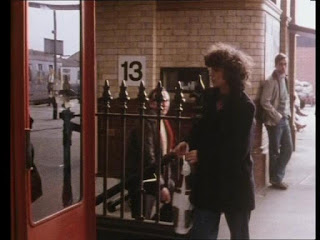 That building behind the man staring at the camera doesn't seem to exist in present-day Victoria either.  Any railway experts want to confirm?  (Incidentally I always hated those red phone boxes with the big pane of glass).

Manchester Victoria was linked to the late great Ms Wood one final time in June, when Sue Devaney hosted a celebration of her life there.  There were songs and quotes and people dressed up in berets (something I have never done, and I never will).  I didn't go because, well, did I mention the people in the berets?  But also because I think I'd have found it way too sad.  For a day it became Manchester Victoria Wood station, and frankly they should have kept it that way.  She was a legend, and I'm sorry she's gone.
Posted by Scott Willison at 21:19 2 comments:

One Is The Loneliest Number

I've got a spreadsheet where I keep track of my station visits.  I started this when I moved onto collecting Northern stations.  When I was doing Merseyrail, people would say to me, "how many have you got left to do?", and I'd reply "dunno".  I'd just been crossing them off the map, not keeping count.  It made me sound a bit dopey, so when I moved onto the much larger Northern map, I introduced a spreadsheet.  Spreadsheets make everything fun.

Anyway, after my visits to Thirsk and Malton the other week, I came back and added them to my spreadsheet and pressed return.  And this happened:

The end is nigh.  There is just one open, currently served by trains station left for me to visit.  (I've not included Low Moor, Ilkeston or Warrington West, for the simple reason that you can't get a train to them and nobody really knows when you will be able to).

It's the end of the line.  I know exactly what that last station is; have known for a long time.  I decided to make this station the finale a long time ago.  I'm not going to say which one it is, but I will say it's already been on this blog.  I've been there before.  I just never, for some reason, did a proper blog post about it, and I didn't do a snap of my big face in front of its sign.

So there you are: one to go.  I don't know when I'm going there because, obviously, I don't really want to go there.  When I go to that station it's all over and done with.  The end.  But consider this notice: it's all coming to a close.
Posted by Scott Willison at 12:11 3 comments: