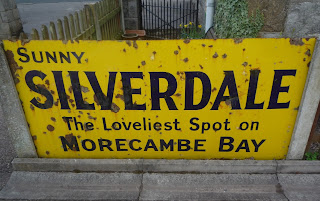 Oh yes, I thought.  This was a good idea.

I'd stepped into a quiet country station.  Trees, as yet unburdened by leaves, rose up above me on either side of the tracks.  Green ivy swarmed over stone walls.  A station building turned into a home, soft nets at the windows, budding flowers in pots. 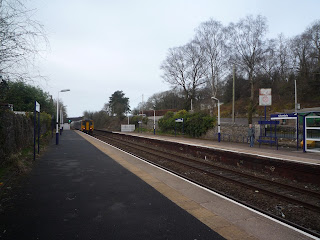 I trotted across the barrow crossing to the exit.  It wasn't even 8 am, and the world was still rousing itself.  Monday morning made it sluggish and lazy.  On the other hand, I was full of enthusiasm and cheer.  This was the first station of many, the start of my odyssey, my epic journey with little purpose. 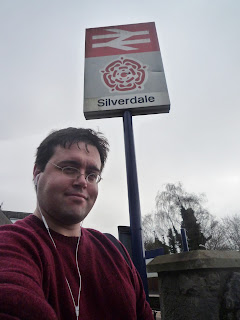 I passed the old station building - rechristened by its new owners La Gare, complete with blue and white tiled name plate - and onto the tarmac.  There was no footpath of course, out here in the countryside, but there wasn't any traffic either so I didn't have my usual trepidations.  Sheep croaked at me from the adjoining fields, lambs huddled against their mothers - was it a warning or an acknowledgement?  I hovered by a gate in the hope that one would wander over for a stroke, but they stayed at their distance. 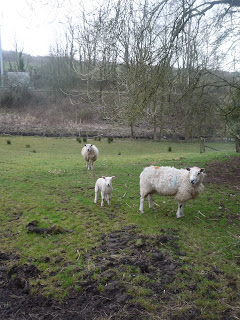 The road bisected a golf course.  I've already made it clear that I have no time for golf or golfers.  The signs warning me it wasn't open to non-members, and wasn't a public right of way, and basically we don't like oiks, didn't endear me to them further.  There were a couple of men out on the greens even this early in the morning.  I considered sneaking up behind them and coughing or shifting the small change in my pocket loudly or something.

I didn't of course, partly because I didn't want a putter up my anus, and partly because I didn't want to ruin the gloriousness of the day.  Even though it wasn't perfect - too many clouds - it was still wonderful to be walking without a coat through the Lancashire countryside.  Yes, as that red rose at Silverdale indicated, I was briefly back in Lancashire.  It's quite astonishing how huge that county is (and how much bigger it used to be before Manchester, Liverpool and Cumbria were all torn away from it).  In fact it's a bit of a shame that it was reorganised that way - it's like the government looked at Lancashire, cut out all the best bits and left the rest for the county council.

At Challan Hall, a tiny row of houses where a man was just taking two excited labradors for their walk, I turned left.  I was shadowing the railway track again.  Fast trains sped by, and every single one fired their horn as they did so; I resented the intrusion every time, silencing the birdsong for a moment. 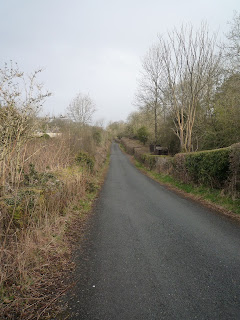 I crossed back over the railway and straight into a quarry.  The signposts were brutal: the public footpath was to the right, and that was as close as you were going to get, sonny.  Massive red danger signs were everywhere.  I don't think the quarry is still in use - I certainly couldn't hear any digging - but I sloughed off quickly. 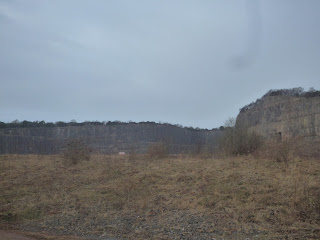 It took me into a wood, a beaten track that was only a little muddy after the previous day's rain.  The birds were even louder now.  It was a cacophony.  I wished I had even a slight knowledge of countryside lore to be able to identify them, or perhaps some of the plants at my feet, but I am absolutely hopeless at all this sort of thing.  I probably should have learned all this in the Cubs, but I managed to get only about four badges in my whole time there: we were too busy playing British Bulldog on the wooden floor of the Scout Hut to bother with that sort of thing.  I'm very good at getting splinters out though. 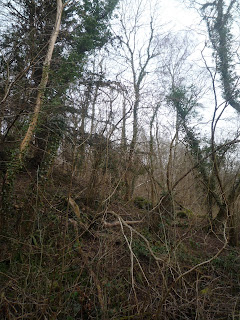 I could identify a flock of ducks who were having a break in a field.  As I approached, they began quacking at one another, and strolling away, that outwardly nonchalant but also slightly panicky fast walk I always do when I have to pass a gang of teenagers on a street corner.  "No, I'm not worried at all; I always walk like Duncan Norvelle wearing a full nappy."  Their quacks became more and more fevered until one of them finally broke ground and flew away; his screaming fit made all the rest of them panic too, and they catapulted into the sky to escape me. 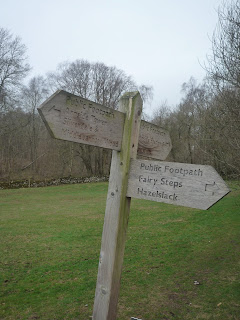 There's something vaguely homophobic about a path leading to "Fairy Steps" and "Hazelslack".  Especially as I chose the other option - the route to "Black Dyke".

I'd entered Arnside now, a little commuter village full of horrible 1960s bungalows.  The houses on the opposite side of the road were upside down, with the bedrooms downstairs and the lounge up top, so they could peer over the roofs of their neighbours.  There were pretty stretches of flowerbeds, but also a lot of over tarmacked driveways and big ugly cars.  It was Daily Mail territory.

Down by the coast though, it became special.  The River Kent expanded out into a sandy estuary, wide and empty.  A low wooden viaduct carried the railway across to the east, while across the way the mountains of the Lake District were shrouded in morning fog. 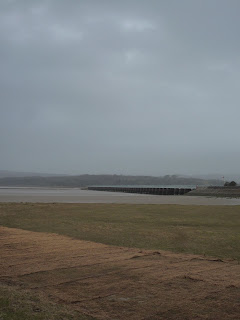 I went down onto the front, just to take in some of the brisk air.  I'd hoped for a cup of tea or something, but there was only a pub, Ye Olde Fighting Cocks (stop it) and that wasn't open, obviously.  There were a couple of B&Bs and a chippy too. 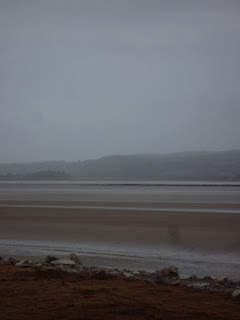 I doubled back to the station.  It's right on the end of the viaduct, as though they built it on the very first bit of dry land they could get to.  The salt air had bitten into the footbridge, rusting it picturesquely.  I say "picturesquely"; I probably would have found it a lot less scenic if I'd had to actually use it. 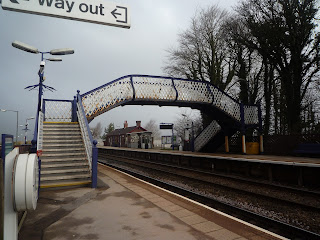 I guessed from the lack of a red rose that I'd crossed back into Cumbria somewhere along the line.  They should have a marker post or something. 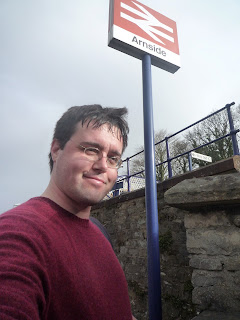 I got off at Kents Bank, which I'm sure should have an apostrophe in there.  It's the Bank of the river Kent: possessive.  Sort it out, Northern Rail. 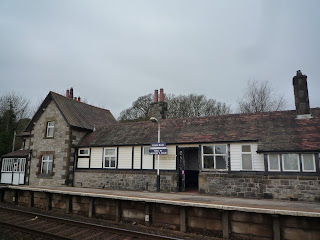 Inside the waiting room was a strange object. 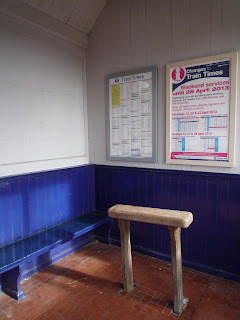 What's the point of that, I wonder?  A leaning post so you can relax while you take in the timetables?  Something to tie your horse to?  A wooden homage to the Spinal Tap Stonehenge?

There was a further curiosity at the level crossing. 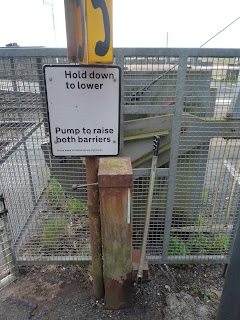 A pump-action level crossing is a new one on me.  I pictured wheezing old ladies struggling to get it up to the right height, furiously pumping away like they're trapped on some sadistic Wii game, just trying to get the barriers up another six inches to accommodate their Mini Metro.  I was tempted to have a go myself, but I have the upper arm strength of a recently birthed vole, and I didn't want the CCTV footage ending up YouTube. 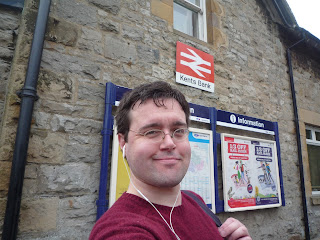 Pretty cottages the colour of ice creams wound up the hill away from the coast.  Well-tended gardens were testament to the high proportion of retirees in the village.  Every hedge was straight and clipped; I pictured grey haired men using set squares to make sure the angles were just perfect.

I'd planned on going up the hill to the main road into Grange-over-Sands, but I spotted a little wooden sign pointing to the right: The Promenade and Grange.  Rough steps went towards the river's edge.  I had to go down.  I can never resist a mysterious staircase. 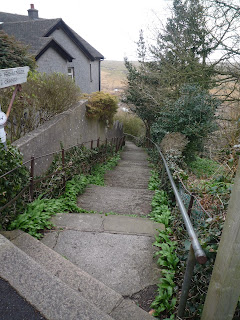 "Promenade" was a very grand title for what turned out to be little more than a footpath round the back of some houses.  Maybe there had been a time when this would have been above the water, a couple of centuries ago, but now the railway line took up the land by the front.  Instead of inspiring vistas I was left with a curiously claustrophobic walk beneath the embankment. 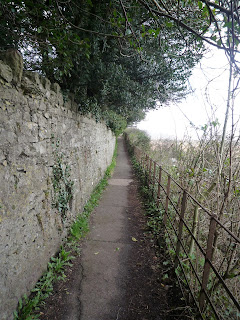 Back on the road, I followed a sprightly old lady with a shopping trolley up the hill and into Grange-over-Sands.  I was immediately struck by how genteel it was.  I thought of Victoria Wood, saying that it was like Morecambe "only without the throbbing sexuality".  The houses, the parks, even the road signs seemed to exist in a state of perpetual turn of the century repression. 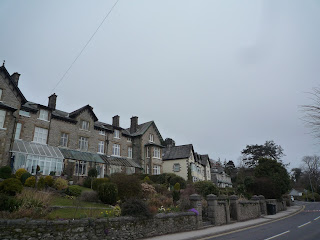 It said a lot that the town's modernist swimming pool was closed and left to rot.  I could only imagine the collective pearl clutching when it was first built. 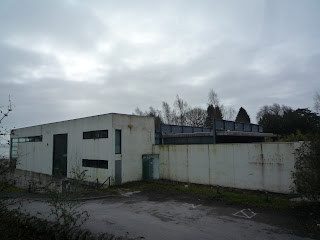 I headed away from The Esplanade and into the town itself.  The high street was lined with tiny, local businesses, the only chain store being the Co-op.  A grocer's window tempted me with red checked cloths and promises of potted shrimp.  Coffee shops were already filling up with pensioners.  I ducked into the At Home Cafe and claimed a seat by the window.  It had only been open ten minutes but two tables of four were already occupied by old ladies drinking tea.  To my side were the dullest couple on earth, a pair in their mid-twenties who consulted every item on the menu, discussed its nutritional value at length, then ordered English breakfasts without the egg.  When the wife's orange juice came, they discussed whether it was from Spain or from Italy for what seemed like twenty minutes, leaving me with no choice but to stove in their skulls with a salt shaker.

I ate my ham and cheese toastie (I'd ordered a cheese and onion one, but never mind) and left.  I immediately regretted it.  Round the corner was Higginsons of Grange, a butcher that had the most tempting array of pies I have ever seen. 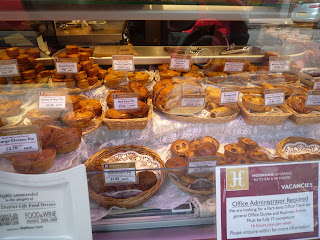 I cannot say enough how much I love pies.  You've seen pictures of me; of course I do.  Pie crusts are pure temptation, their brittle collapse under your teeth, their savoury beauty, then finding the meat inside as it swims into your mouth.  I am absolutely hopeless at making any kind of pastry, which regretfully means I will never meet Mel and Sue on The Great British Bake Off.  I once tried making my own pork pie, but the less said about that grey abomination the better.

I stared in the window.  Steak, ale and stilton.  Turkey and ham.  Pork pies the size of my fist.  All with the little boast Baked Daily On The Premises.  I thought about striding in and demanding they simply fill my backpack with whatever they came to hand.  I cursed that toastie; I was too full to eat anything now, and having one of those pies cold would have been an abomination.  I dragged myself away, leaving a pool of saliva on the pavement behind me. 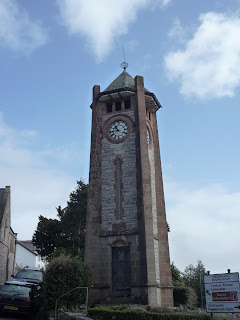 At least the sun had come out while I was in the cafe.  I wandered down to the front, passing under the railway to reach the prom.  A sign informed me that, even though it was a big archway leading to some steps, the path beneath the railway "was not dedicated to the public".  I'm not sure who it was dedicated to, then. 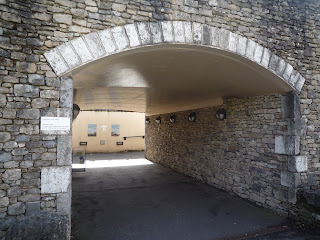 It was still a bit too cold for tourists, a bit too early in the season, which suited me.  I took up a bench on the front and watched the light sparkle off the river.  Grange-over-Sands might not be an exciting entertainment mecca, but at that moment in time, that was fine by me. 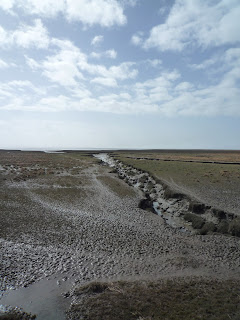