Everybody likes Newcastle, don't they?  It's just an ingrained part of our national psyche.  I bet Ant & Dec wouldn't be half as popular if they came from Plymouth.  I'd never been before, but I'd long wanted to - it was far higher up my wish list than Preston or Manchester.

It's just so damn hard to get to.  I sort of imagine it to be on the opposite side of the country from Liverpool, but no, that's Hull, and no-one wants to go to Hull unless they really have to.  You have to do a diagonal, right up towards the border with Scotland, up where the air gets thinner and colder and you get the occasional whiff of haggis.  There's only one train a day from Liverpool to Newcastle at the moment, the 06:15.  It's a six car train that splits in two at York, with the front going on to Scarborough and the back continuing to Tyneside.

What I'm basically saying is that I probably would have liked Newcastle anyway, but the train crossing the Tyne sold me completely.  The parade of bridges lining up - impossibly high, impossibly wide - is such a striking, surreal vista.  Coming from Liverpool, which also has a very wide river with docks either side but never got round to building a bridge, it's awe-inspiring.  The train then slides into Central station and you get a glimpse of that magical, sexy Calvert font promoting the Tyne & Wear Metro, and it's full blown adoration. 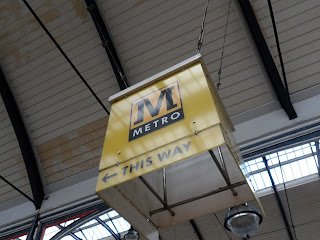 And this love letter comes from a total of three quarters of an hour in the city, spread over two separate visits to the station.  I didn't even have time to step outside.  I had a ten minute window to barrel over to the ticket office, get a Hadrian's Wall Country Day Ranger, then run back to get my Pacer out of town again. 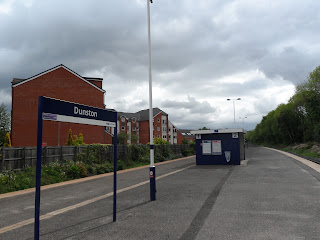 I had to dash because there's only a couple of trains a day to Dunston.  If I'd missed the 9:45 I'd have been forced to miss the station altogether.  Luckily I made it, and I was the only person to alight onto the wide island platform.  I immediately whipped out my mobile and checked in on Foursquare.  This is partly because  I like totting up the points (though it gets a bit depressing when I get an alert of Congratulations! Five weeks in a row at Sainsbury's!), and partly because it was a Dunston Check In.

You probably don't remember terrible family comedies starring an ape and Jason Alexander in a bad wig, but I do, based purely on its trailer:


It's a bizarrely accurate copy of the GoldenEye trailer, and I will love it forever for that.  Just turn it off before Academy Award winner Faye Dunaway simulates orgasm while getting massaged by a monkey.  (I should also point out I haven't seen the film; nothing could match up to the trailer). 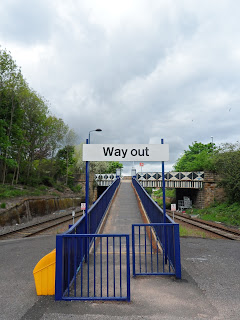 Unsurprisingly, for a station so sparsely served, there's not much to Dunston.  A ramp up to the road bridge and a few signs, that's all. 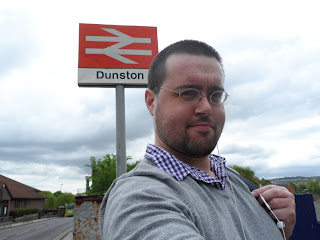 I walked away, past a pub with footballs for lamps, and into a sparsely populated district of industrial estates, docks and 1960s housing.  Wide open expanses of green marked the spot where a tower block had been razed to the ground, waiting to be replaced with more modern housing when the market picked up. 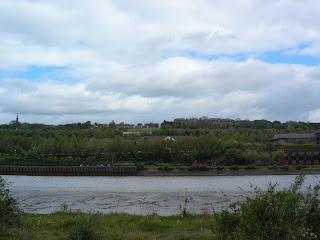 I was shadowing the Tyne, but it hadn't been gentrified and tidied here; it seemed like a much wilder river than the Mersey.  The geography of the area means that the space by the river was devoted solely to industry and docks, with residences on the higher land instead of mixed inbetween as on the Wirral or in Bootle.  There was a feeling of desolation and isolation; I was the only walker, criss crossing the road to get round parked up trucks or places where there just wasn't a footpath at all.

Passing Mandela Way (I'm sure the hero of Robben Island will be delighted to learn that Gateshead Council have memorialised him with a road round the back of Costco) the traffic began to get a bit thicker, a bit more domestic.  I was approaching the Metrocentre. 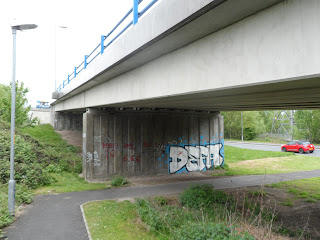 When I was young, I got a copy of the Guinness Book of Records.  It was second hand, bought from a car boot sale and containing facts that were clearly out of date ("Abba are the world's largest band?  That bunch of disco has-beens?").  It had a purple cover and, for some reason, the pages smelt of beef.

I was the kind of boy who would open it at a random page and just go on a little tour of the pages, passing from one fact to the next, following little trails and picking up info on the way.  This is when the Guinness Book of Records contained actual superlatives, and wasn't just a list of "stupid people doing weird shit".  The MetroCentre was in there, partly because it was a massive shopping centre, but also because it had its own theme park.  You can imagine how exciting that sounded to a kid.  The Arndale in Luton didn't have a theme park; it had some fibreglass flamingos and a market that stank of fish.  In my mind, there was a rollercoaster right down the middle of the mall, corkscrewing screaming teens over the heads of their mums nipping into the British Home Stores. 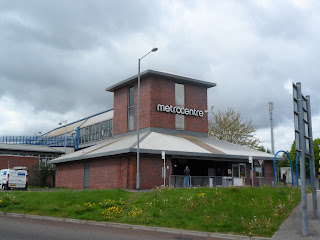 I was disappointed to discover that the theme park closed five years ago.  What was left was a big shopping centre, one that was currently undergoing a lot of regeneration - ironic, since its opening in the 1980s was a symbol of regeneration in itself. 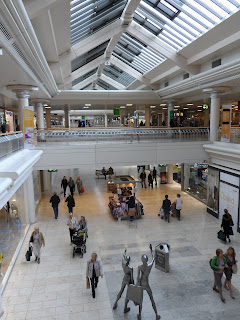 It was very Lady Di in places - mirrored tiles and marble effect - white columns to give you that Roman bath feel.  I'm not sure why there's this architectural urge to make large malls look like an extension to the Coliseum, but it does seem to be very popular.  The Central Mall is in the process of being transformed into the "Platinum Mall"; the shops are going upmarket, there are leatherette chairs instead of benches, and a champagne bar has been installed on the first floor.  It's all very WAG-friendly. 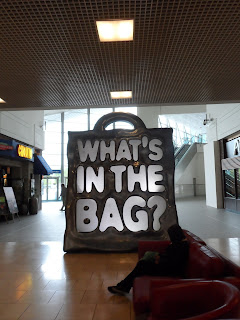 I was personally more excited to find a Greggs Moment, a new concept where everyone's favourite purveyors of pig gristle and oily pastry have put a few chairs in to make a cafe.  This revolutionary new idea is just being trialled in the North-East at present, though if they want to know how it works, they could just visit the Sayers in Williamson Square where they've been doing much the same thing for decades.  I resisted a Steak Bake and pressed on. 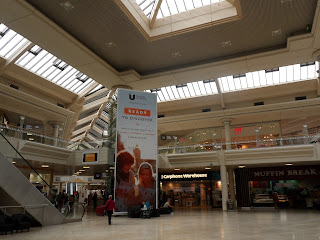 It was all very ordinary.  I suppose part of me was let down because there was no funfair.  A little train did pass me, offering kids a ride round the centre for a quid, but it wasn't exactly Alton Towers.  It was just another shopping mall.  Not even the laminated sign on the columns from BBC Three warning I could be filmed (for the first series of Mall Stars - a "brand new six part series following the lives of people who work at the MetroCentre in Newcastle!") could infuse it with any sense of glamour.

At least the bus station was interesting.  It was rebuilt a decade ago, and has a grand sweep to it, a real sense of place and importance. 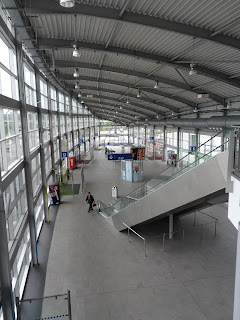 It's certainly better than the station.  On the one hand, we should be glad that the MetroCentre has its own railway station - out of town shopping centres aren't often bothered about public transport provision (the Trafford Centre still hasn't got round to building the Metrolink extension it promised, fifteen years after it opened).  It gets a good service too - a train every fifteen minutes from Central, some of which continue onwards while others just reverse. 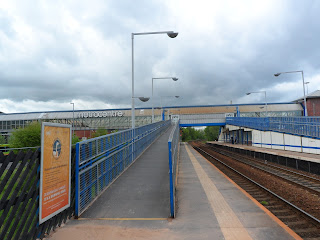 It's a shame it's such a bland, dispiriting station.  There's no ticket office, no attempt to integrate it into the loftily titled "Transport Interchange".  It's a couple of formica clad buildings out on the edge of the MetroCentre complex and it hasn't been updated since 1986. 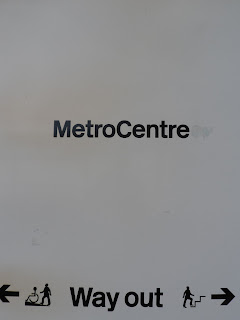 The bus station came with a Debenhams - their decision to take space as anchor tenants meant there was money to redevelop the transport side of the mall, giving more space for arrivals by coach.  I don't know who would take a coach trip to see a shopping centre, but there's clearly a market for it.  Liverpool One has just installed some bays for visitors, which depresses me; I suspect there are a lot of people who are getting off that coach, looking round the shops, lunching on the Leisure Terrace and then leaving without seeing any part of Liverpool that doesn't belong to Grosvenor. 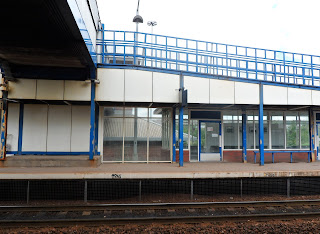 It's a shame the owners couldn't have found a few grand to give the station a make over to match.  Or at least to build a decent sign.  I had to squat under the platform sign, which just isn't on.  Never mind your champagne bars and branches of Karen Millen - won't somebody think of the bloggers? 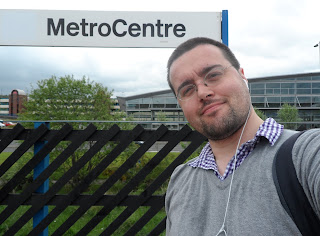 If only I'd known you were coming up to Newcastle, I would have recommded a wonderful walking tour around the toon itself for you taking in some magnificient pub interiors and that. The Metrocentre is hell on earth. Hell.

I went to university in Durham and have fond memories of visiting Newcastle. Especially that night we missed the pre-midnight train and ended up having to wait for the twenty past one train. Which would have been fine were it not for the British Transport Police trawling the station and shoving everyone out on the cold streets. Public safety? Yeah right.

Greggs have had cafes for years. There was one in the 80s and 90s in the market section of the Manchester Arndale (no idea if it's still there), and they bought the Bakers Oven chain in the 90s which had a lot of cafes. Indeed I sat in the one in Durham (now rebranded to Greggs) last year.

But Greggs Moments? What a terrible name.

Coach trips to shopping centres are quite common. I remember as a kid every Christmas the car park at Conway Park station would be full of coaches from across North Wales so that residents of remote villages could do their Christmas shopping in a town with a much better retail offer (to think Birkenhead was considered superior to elsewhere!).

Also Sayers cafe in Williamson Square closed years ago and I think is now some gelato place.

I thought the Sayers just moved round to the old Clarks shop, opposite Rapid? I was pretty sure it was still there last time I visited.

Oh did it? Haha! I guess it became so, erm, iconic on that corner that I just didn't notice it had moved and assumed it had simply bitten the dust!