Day One: City on the Edge of Forever

For some reason, I'd always wanted to visit Barrow-in-Furness.  There probably aren't too many people who've said that.

There was just something about this town that appealed to me.  Its position at the very extreme of England, perched on a spit of land, shielded by an island.  It's a cul-de-sac, and I like that, the finality, the distance.  It takes an hour for a train to get to Barrow from Lancaster, and you pass through open, empty landscapes before you reach the station. 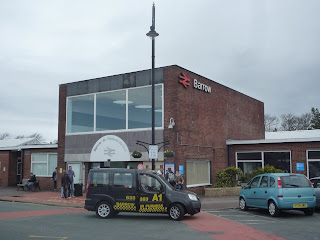 It's not much to look at from the outside, though for once, this isn't down to over-enthusiastic modernisation by British Rail.  A bombing raid in 1941 obliterated the station, a fact commemorated in the hall.  A sandstone memorial to the fallen of the Great War comes with a plaque at the bottom: The damage to this memorial was caused by enemy action in World War II.  Chips and chunks have been carved out of it by explosives and shrapnel. 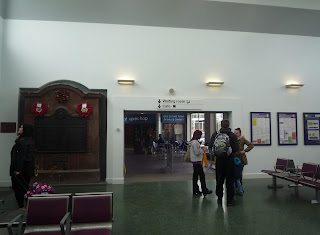 The rest of the station has been modernised fairly recently, and is pleasing enough.  There's a shop and lifts and waiting rooms.  It's all very efficient and calm.  Despite its position in the middle of nowhere, Barrow's importance as a centre for industry - and especially the defence industry - means it gets a good, frequent service to Manchester.  You can tell this isn't another backwater station to FirstTranspennine Express. 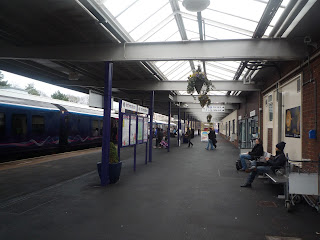 I arrived on a Sunday, and wandered into the town centre for a look round.  The railways brought riches to Barrow, linking its iron ore deposits and the massive dockyards to the rest of Britain.  What had been a small fishing port for millennia transformed itself during the Industrial Revolution into a centre for living and working.  Instead of it haphazardly springing up, the manager of the Furness Railway proposed a planned community; he laid out streets and avenues.  Barrow's a railway town in the most literal sense; until the Town Hall was built, the local worthies met in the train company's offices.  Sir James Ramsden, the owner of the Furness Railway and the town's first mayor, is now commemorated in a statue at the centre of the town, where its main avenues cross. 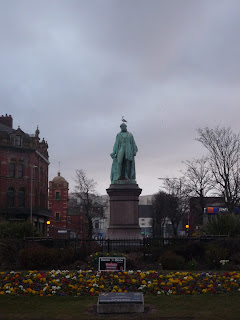 Immediately outside the station is a statue to a very different kind of civic worthy - Emlyn Hughes.  Now I liked the chirpy footballer in his appearances on A Question of Sport in the 1980s, pawing Princess Anne; the BF, as a committed Liverpool fan, still speaks of him in hushed tones.  Hughes was born in Barrow, and died too early, so you can see why people would want to commemorate him.  I just think it's too soon to do it.  I think you need to leave it at least twenty years after a person's died to see if their legacy has lived on.  Now celebrities are hardly in the ground before they start pouring out the bronze.  I'm not saying Emlyn Hughes doesn't deserve a statue; I just think it's too soon for us to judge properly.  If Katie Price got hit by a bus tomorrow, wouldn't there be a large contingent of people wanting her to be memorialised?  Wait a while and then we'll see if anyone still cares. 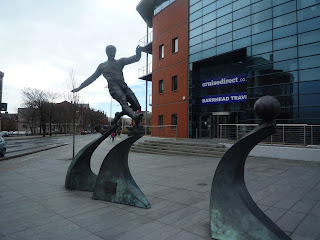 I turned off Abbey Road, with its fine civic buildings, into the shopping area.  Barrow's not a Sunday shopping town.  Most of the shops were closed.  It meant I couldn't sample some of their more interesting stores, like this innovatively named shop: 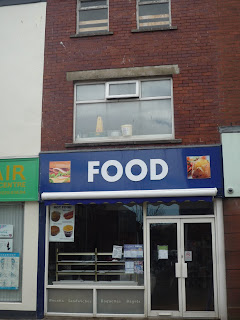 Like most Northern towns, Barrow's suffered from the collapse of traditional industries.  Unemployment's high, and regeneration is key.  There are parts of the town with that slightly desperate air of over management.  Places with brick paving and elaborate seating and fancy lampposts with flying buttresses for some reason.  I'm not sure why lampposts are always the first thing to be replaced when a town is "done up".  Do you ever pay attention to the light fixtures in a town centre?  It's like spending a load of money making the drainpipes look nice.  So long as they're doing their job, no-one's really bothered what they look like. 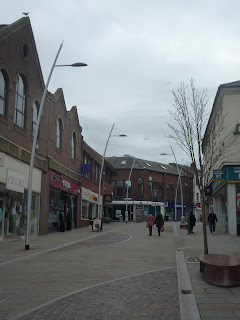 Of course, there's more public art: this time, The Spirit of Barrow, a tribute to the workers of the town.  The ones that are left. 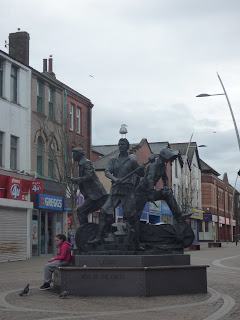 The dignity of the tribute is undermined by the seagull, but it's impossible to get away from them.  The soundtrack to the town is a cawing, shrieking cacophony of birds.  They swoop in and above you everywhere you go.  I passed an empty plot of wasteground that was almost completely covered with gulls; they seemed to eye me suspiciously as I walked by, cold yellow balls rotating towards me.  Sizing me up for food potential.  Seagulls are huge; you don't realise when you see them in the sky just how big they are.  (Although these might be mutated gulls, fed on Sellafield's outflow, with teeth and lasers and the ability to talk).

No town is at its best on a quiet wet Sunday.  I followed silent streets round the pedestrianised area, where even national chains like New Look and WH Smith couldn't be bothered opening.  Slowly my route rotated outwards, towards the edges, until I saw a street that was so Northern it actually took my breath away.  It really needed a Dream Academy soundtrack and some urchins playing with a hoop and a stick for the full effect, but it was still pretty awesome. 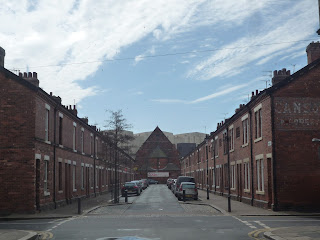 You can just about see the Devonshire Dock buildings in the background of that shot.  The huge hall was built so that nuclear submarines could be constructed in the town, and it dominates the view.  Almost everywhere you go you can see it poking up over the rooftops. 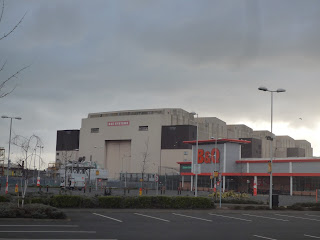 Later that evening, once I'd dumped my bag at the Travelodge, I returned to the docks to have another look at it.  It's a truly impressive building, massive in every sense, a vast five-chambered incubator for subs.  Under the angry skies it looked even more imposing. 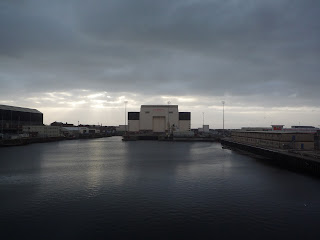 You can never forget that this is a naval town.  It's not just the Devonshire Dock Hall, it's the streets named after Nelson and Drake, it's the cranes on the horizon, it's the MoD signs warning you that trespassers will be  dealt with most severely.  Whole sections were walled off and protected under the "Serious Organised Crime and Police Act 2005".  I was almost tempted to climb over one, just for a laugh.

The BAe complex stretches across Barrow Island, the other side of the dock, but here it's much more old fashioned.  The buildings are red brick leftovers from when this was all Vickers'.  It looks bedraggled and abandoned at first glance, but look closer and you can see the CCTV cameras and the modern security entrances tucked away.  As is appropriate for a submarine works, it keeps its weaponry hidden. 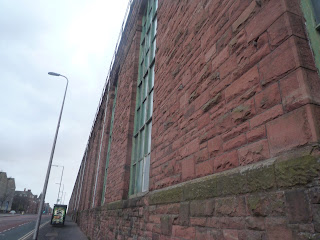 Across the road were a surprise: tenements.  A little bit of Glasgow had somehow come adrift and escaped across the border.  Their symmetry and stolidness pleased me; I wondered if they were as well preserved inside as they looked.  I hoped they hadn't been subdivided into tiny bedsits. 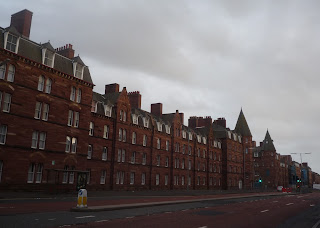 Soon even the industry ended, and I had reached the Walney Channel.  Wild winds tore at me as I looked out over the empty shore.  The tip of Walney Island curved off in the distance, dotted with houses and industry. 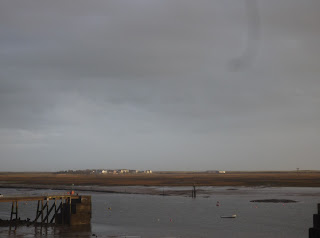 If I take just one memory from Barrow, it'll be the skies.  Huge, epic, rolling skies that stretch forever without anything to obstruct them.  Sad skies, cold ones, vistas of loneliness and heartbreak.  The sky and the town are suffused with melancholy.  A beautiful, abandoned feeling.  A town that's unwanted but industrious.  It works hard, isolated, unattractive, on the edge of the world.  I fell for its ugly face and its pretty soul. 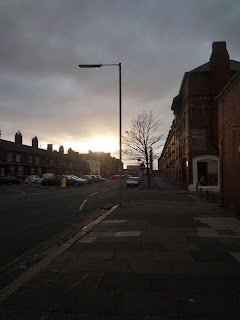 Back through Barrow Island, where the chip shops and Chinese takeaways were filling up, and across the dock bridge.  The road back out to my hotel was astonishingly horrible.  The old docks have been filled with retail sheds, ugly behemoths built out of tin.  There was a never ending cube of a Tesco Extra, blaring its logo at passers by, turning its back on the town so that it could face the car park.

I never walked that way again, preferring the narrow back streets.  The houses there were also ugly, embarrassingly so, but at least there was life.  Kids on scooters.  Women with pushchairs.  A basketball court playing host to a noisy game of football (this is England: it doesn't matter how many hoops you put in, we're still going to use it for a kickabout). 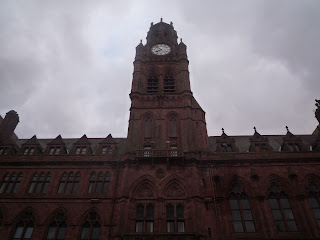 For some reason, I'd always wanted to visit Barrow-in-Furness.  I'm glad I finally made it. 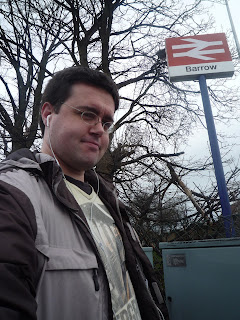 Barrow station is, of course, where the Island of Sodor's railway meets the big railway.