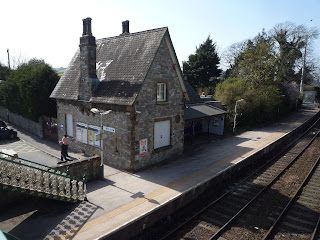 When I am supreme ruler of the universe (this day will come, MARK MY WORDS) I will insist that all railway bridges have a footpath alongside.  It's not a difficult, or even very expensive, provision.  Just a little wooden bridge hanging off the side so that walkers and cyclists don't have to go round the long way at estuaries and rivers.  That's fine if you're in a car - you don't care about a bit of extra distance - but it's incredibly frustrating, as a pedestrian, to look ahead of yourself and see a lovely great bridge you can't use.  (Unless you decide to trespass, cough cough).

I had to miss out Cark & Cartmel as part of my usual jump off the train, walk on to the next station pattern, because there was a blimming great river in the way.  It takes the train seven minutes to get from Cark to Ulverston, via a bridge over the mouth of the estuary; if I'd walked via the footbridge much further upstream, it would have taken me about four hours. 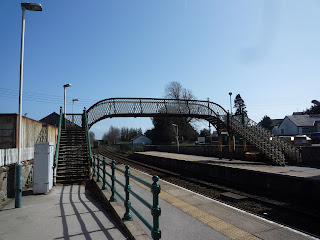 Despite its name, this is pretty much a station just for the village of Cark.  Cartmel is larger, but it's also a fair distance away - it's as far from there to Grange-over-Sands station as it is to this one.  As a result, the name is often just shortened to just Cark on timetables and train announcements.  I also cannot let it pass without noting that the three letter National Rail code for the station is CAK. 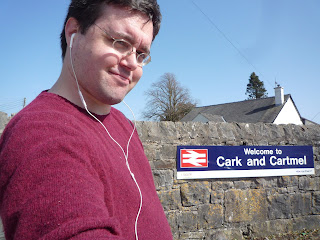 I passed out of the car park, past a pile of stones that was probably once a wall until someone took the corner too fast, and into the village.  I had low expectations, but fortunately, Cark defied them.  Built around a bridge over a tumbling river, the village made a great impression. 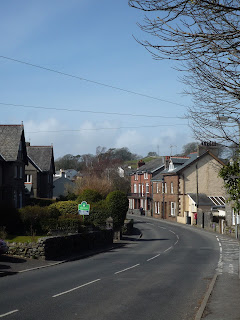 I walked from one end of the village to the other - a process that took me about five minutes.  The houses were well-groomed, the roads quiet, the view across the hills predictably stunning.  I got to the fringe and then turned back and went to the pub. 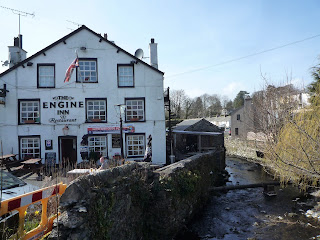 I had an hour to kill.  What did you expect me to do - take up residence outside the public toilet and chat to passers by?  The Engine seemed like a perfectly suitable place to stop and have a bit of a rest.  The landlord and his wife were sat in the front, eating their lunch and watching Dickinson's Real Deal on the flatscreen.  I got a pint and found myself a quiet corner.  Carrie tweeted excitedly when she realised where I was, "CARK <3 STICKY TOFFEE PUDDING <3".  I had to reply that even though it might be the finest pudding known to man, I couldn't purchase anything from a menu that spelt "desserts" as "deserts".  I have to be strict like that or these people will never learn.

A little light headed - for some reason, beer before six o'clock heads straight into my bloodstream - I went back to the station for my last train of the day.  Avoiding the platform signposted "Trains to Lancaster AND BEYOND", which sounded a bit metaphysical to me, I boarded the train towards Barrow. 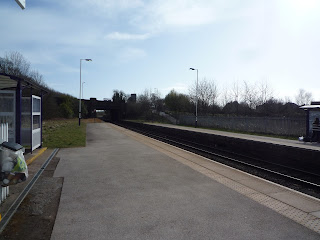 Roose sounds like something Scottish people do to one another after the lights are out.  It's Barrow's other station, a perfunctory suburban halt behind a Tesco.  I disembarked with a load of schoolkids, all evidently on their way back from some public school in Grange.  There was one young man, about 12, sat with two girls; I felt like leaning over and tapping him on the shoulder and saying "You do realise you're a homosexual, don't you?"  He had fabulousness shining out of every flaming pore; I thought I might save him some teenage angst by letting him know early on. 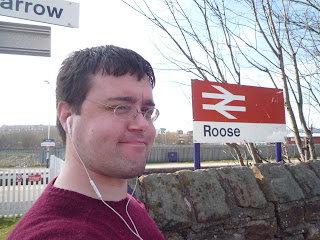 With the station sign under my belt, all I had to do was walk across town to my hotel.  Unfortunately, "under my belt" was the problem.  My trousers were trying to injure me.

All day, I'd felt a seam on the inside of my walking trousers scraping against the inside of my leg.  Over and over, rasping away.  Though I didn't know it until I got back to the hotel, it was in fact stripping layers of flesh off my thighs, like an oilskin bacon slicer.  When I finally peeled them off that night I found they were soaked with blood, and I had to wash them in the sink (and indeed, every night after that, as I only had one pair of trousers with me). 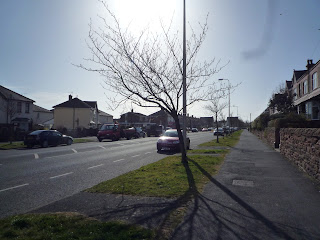 It started off fine but after the first mile or so it started to become agonising.  The hot sun didn't help, causing sweat to run into the scraped inside leg - I was literally rubbing salt into the wound.

As I hobbled along, Barrow shifted around me.  Roose seemed like a good, sensible working class neighbourhood.  Grass verges and big family homes with a spot of garden outside.  An off licence called "Betty Booze" (which got me a reply on Twitter from Betty Boo herself!).  A sandwich shop called "Buttylicious" (clearly pop puns are big with Barrow's retailers).  A couple strolling away from Aldi, arm in arm.

Cross the road, and things immediately shot up the social scale.  Barrow's planned layout meant that its suburbs felt like distinct entities: a main road separated one group of workers from the other.  I'd definitely crossed into the middle class - there was a park, plenty of greenery, and a proud looking high school.  That was getting a new, large building; as it didn't make me want to dry heave, I guess work started before Michael Gove swept in and insisted school buildings shouldn't have luxuries like windows or corridors or lighting.  The houses meanwhile had elegant curves and whitewashed fronts, very between the wars. 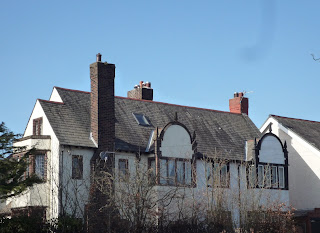 It made the shift across another main road even more jarring.  Suddenly it was terraces, tiny yards out front, shops with thick metal shutters (where they were still open).  One was called Fax-a-Snack; I had visions of sandwiches being sent down phone lines.  Then again, who even has a fax machine these days?  They probably haven't had an order since 2007 and can't work out why. 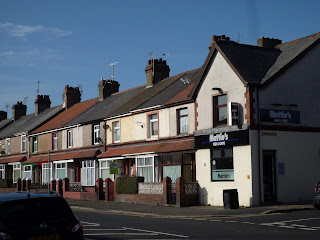 The heady scent of chips from Mattie's was calling to me, even from across the street, but by now my eyes were watering with the pain.  The idea of crossing the road, instead of just pushing on, was ridiculous.  The buildings became more and more grim as I advanced - streets with pretty names and ugly maisonettes, a pub called the Tally Ho! that should really have been called Glassing Ahoy!.  A huge electrical substation beneath high pylons.  At a railway bridge, I got a good look into the wide expanse of Barrow LMD, a train maintenance area.  It meant row after row of empty tracks right in the middle of town, land no-one wanted to be close to. 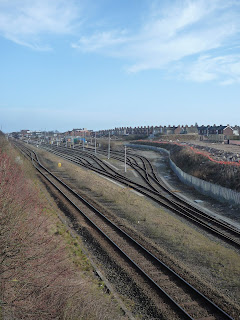 The final stretch took me past the Furness Building Society Stadium, home to Barrow AFC.  I think "stadium" is a bit of an ambitious description, personally.  It was absolutely plastered with adverts - every square inch was covered.  Awwww, at least they try, I thought in an utterly patronising way.

Then - blessed relief! - there was the Travelodge, and I could finally collapse on my bed.  Once I'd got the key to work.  And once I'd remade the bed because the maid hadn't bothered.  But after all that, it was a relief to drop my trousers and relax.

I've said that too many times.
Posted by Scott Willison at 21:29

I feel so proud that I now have my own tag on your blog.

Two mentions and you get a tag. Dem's the rules.

It would be remiss of me not to remark on the appearance in this blog, yet again, of an issue with your trousers.

Perhaps it's worth investing in some kind of linen leg-wear before your next trip?

Clearly my trousers are under constant strain to contain what's inside.

Just curious to know why you didn't goto said Tesco (or any kind of clothing retailer) and grab a cheap pair of new trousers?

Good point. Here's what happened:
1) The trousers were good walking trousers - water repellent, sturdy, able to cope with mud splatters and so on. I got soaked in the rain and they were dry within ten minutes. So a regular pair of troos wouldn't match up.

2) I was either (a) out of Barrow before any of the shops opened (typically 6/7 am) or (b) in towns where there wasn't much fashion-forward choice.

Ahhh yes, makes sense now you say those things! BTW, if you want to see the semaphore signalling on the Atherton line, better do it soon as it's being replaced this year. This will also mean the end of the signal boxes along the line (with the one at Walkden being over 100 years old).

How long 'til the local thugs trash them?