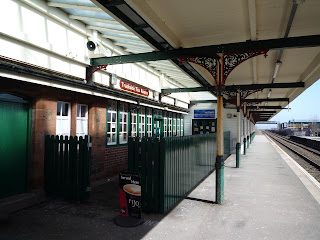 It's a proper tea room too, not a "coffee shop" or a "breakfast bar" or a "lineside snack based experience centre".  It's got lozenge signs and a nice green fence.  It's basically perfect. 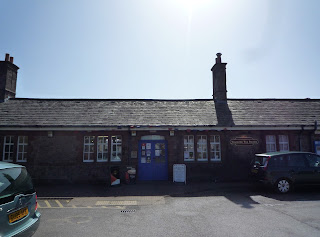 In fact, the only bad thing about the Trackside Tearooms was the fact that I didn't have time to visit it.  My dodgy planning that morning meant that my schedule was on a knife edge; I couldn't afford to loiter, no matter how tempting it was to nip in for a cup of PG.

It's a shame because Millom Station is worth a visit.  Unlike most of the stops on the line, there's a ticket office; even more unlikely, the ticket office is there thanks to the work of the locals, rather than Northern Rail.  It's linked up to the local heritage centre, which also occupies the building.  Sorry, did I say heritage centre?  I mean the Millom Discovery Centre, which uses a very annoying logo that merges the "r" at the end of "discover" with the "m" of Millom.  It ends up looking like DiscoverNillom, or perhaps DiscoveMillom - you can see it here.  I think it's a museum, but it's hard to tell.  Presumably calling it a museum would send children fleeing in terror. 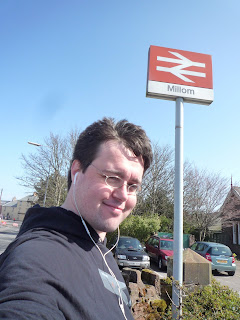 I immediately headed out of town, passing the boys playing rugby at the grammar school and down a side street.  The road narrowed to one lane, then a track, and then I was following the railway line back the way I came. 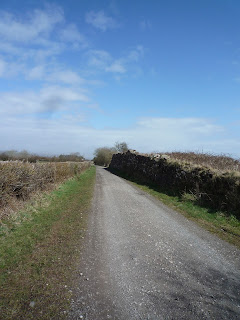 If I'd known Millom was going to be so good, I'd have got off at Green Road and walked there, because it's easier to relax once you've arrived.  As it was I had a trudge in the hot sun ahead of me.  And it was a hot sun: if you look closely at the sign photos over the course of this day I gradually turn a lobster pink.  My excellent South African genes have since turned this rosy glow into a mellow tan (thanks Nana!). 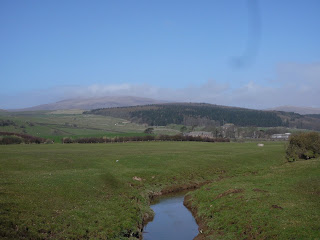 The clear day and my remote location meant I got my first real look at the Lake District's peaks.  It's strange how little I've been here, considering it's only a couple of hours up the motorway from my house.  I still have that idea that it's really far north, inaccessible, when the M6 and the West Coast Main Line bomb right through the centre of it.  In fact the main negative of this whole trip was that I only skirted the edge of it and didn't have a chance to do a Julia Bradbury all over the Fells.  In fact I never will - not as part of this quest, anyway: the Northern Rail map has a big hole where the Lakes are, as Oxenholme and Kendal are not served by their trains.  If you follow their map the only way from Lancaster to Carlisle is round the edge of Cumbria.

Still, it was good to see the distant hills, a light froth of clouds still hanging over their tops, the ground already turning green in the spring.  It was postcards and paintings, a view it was impossible to dislike. 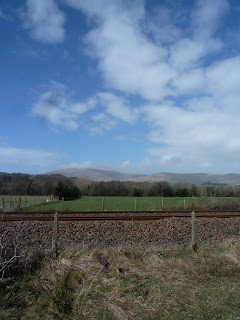 The road was called Aggie's Lonnin.  I have no idea who Aggie was, or what a Lonnin is for that matter, but I felt it was important to record this name for posterity.  It passed over the tracks, where there was a brief moment of excitement as I saw another human being: a man with a 4x4, pulling a dirt bike on a trailer.  Then there was a more heavily shaded, tree-lined walk to Green Road station. 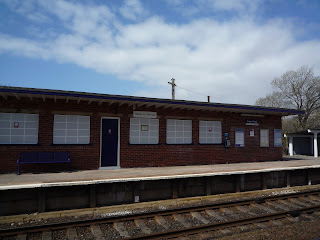 It's a surprisingly urban station for such a rural spot.  It's a request stop, and there are only a few scattered houses around it, no villages, but the building wouldn't look out of place on a city commuter line.  Something about its 20th century lines, the red brick, the lack of ornamentation. 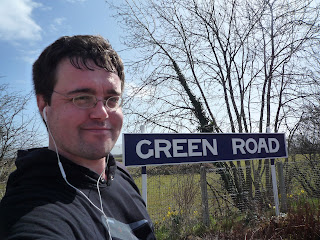 It's definitely out in the countryside though.  You wouldn't get someone in the city attaching their bike to a flimsy fence like that and wandering off for five minutes, never mind boarding a train and disappearing for the day. 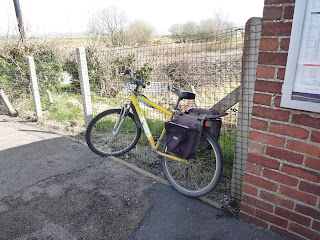 My next station was another request stop, but a bit closer to civilisation.  I had an hour to kill at Silecroft but I wasn't bothered, because it was bang in the centre of the village.  I was sure there would be something to distract me. 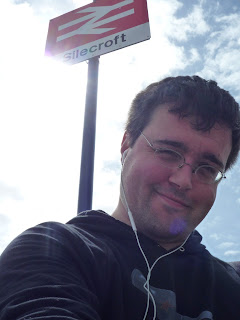 Wrong, wrong, wrong.  Yes, the station was at the heart of the village - it's just there wasn't much of a village to speak of. 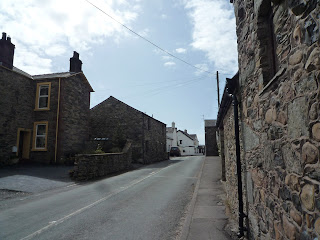 A single road with stone houses arranged haphazardly either side.  I walked one way, past a red phone box with Coins not accepted here in the window (then what's the point?), to where the houses petered out.  Then I turned and walked back the other way.

Don't get me wrong - it was very pretty.  But there wasn't even a shop.  My fantasy of a rural cream tea while I waited - proper scones and sponge cake - was out the window.  I couldn't even get a Twix.  There was a pub, The Miner's Arms, but that was closed during the day (and quite possibly in the evening too; it looked like that kind of place).  Finally I went back to the station and sat on the platform. 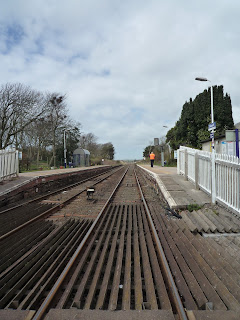 Two men in Network Rail orange jackets had emerged from the signal box, and they were doing something to the track.  They hammered and kicked at the rails for a bit, then went back inside.  It seemed to be a very physical job, whatever it was.  I just baked slightly while Lego Lady took in the view. 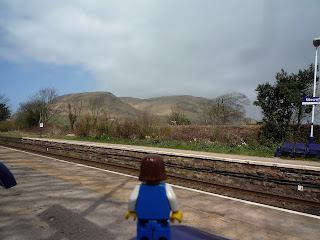 It certainly wasn't filling me with confidence about my next station.  That had been even more isolated that Silecroft on the map.  On the plus side it was called Bootle. 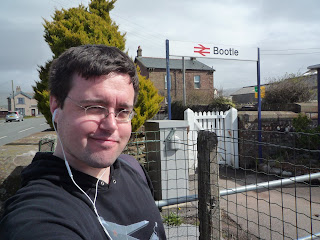 Just imagine the hilarious shenanigans if you got on the wrong train.  You go looking for the New Strand shopping centre and end up in the middle of nowhere.  Or alternatively, you're hoping to end up in some pretty rural idyll and then you're clubbed about the head by a smackhead beneath the Triad.  Either way: LAFF RIOT. 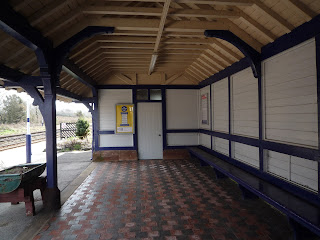 Bootle station (this Bootle station) does have a lovely waiting area - this open barn arrangement, as though some cows regularly caught the 14:02.  It had some very nice tiles on the floor. 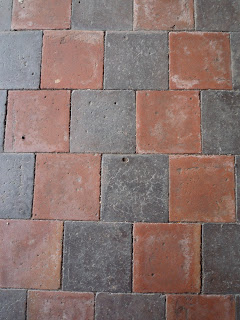 The village beyond was probably once a decent settlement.  There was an old post office building, and an old bank building, and an old pub.  The key word here being old.  They were all houses now, a residential enclave here, desirable homes snapped up by people who didn't really want to engage with the community.  People who drove in BMWs and Range Rovers, parked up outside on a Friday night and left on a Sunday.  Or they were here all week, but worked at the other end of the railway line, and bought their groceries in a Morrison's superstore.  This was less a village, more a dormitory.  As though to underline the fact, a FedEx van swept around the green at speed, no doubt bringing another Amazon delivery to the sticks. 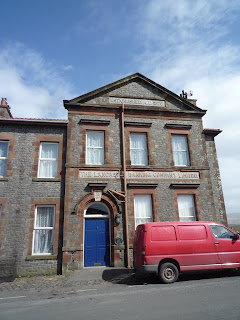 I plonked myself down on the bench on the tiny village green, next to the bin for dog poo.  I had resigned myself to another hour sat here.  I wondered if the curtains would start twitching as people identified a random person in the village.  A stranger. 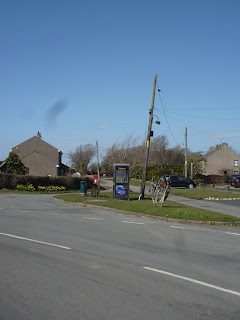 Across the way, the signalman clambered down out of his box and started dragging the gates across the road.  A train's coming, I thought.  Then it hit me: a train's coming.  I dashed back to the platform and got there in time to catch a southbound train.

Where was I heading?  Millom of course. 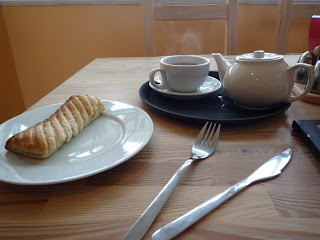 The Trackside Tearooms were exactly what I wanted them to be.  Cosy and welcoming.  A smiling proprietress, who told me to take a seat while she warmed my sausage roll (not a euphemism).  Pictures of steam trains on the wall.  Free wi-fi.  Red stone tiles on the floor, and a large fireplace, and a row of fairy lights behind the net curtains in the window...

In other words, I could have stayed there all day.  I only had twenty minutes until my next train, but I settled into the comfortable chair and allowed the stresses so far to slough away.  My eyes drifted over the community noticeboard, taking in the book group, and the slimming group, and the holiday cottages to let.  Ok, the St George's Day Celebration didn't sound too much fun ("Singing: encouraged.  Dancing: optional.  Flag waving: COMPULSORY") but beyond that, I was content.  A good cup of tea on a station platform - once again, it solved everything.
Posted by Scott Willison at 15:11

I've always thought some of the most boring (or easiest if you like peace and quiet) jobs are to be found sitting in Portakabins at level crossings on this strecth of line.

You did miss the pleasant Beach Cafe at Haverigg - scene of the Mega Breakfast challenge (self not cafe named) which ended up with my wife feeling sick for about 48 hours. And she didn't finish her last egg.

1. Tea rooms has closed.
2. So you didn't stop at Underhill Station - between Green Rd and Millom - along Aggie's Lonnin (= 'lane'). Not surprising, it's not been in use for the last century !

1. The Tea Rooms now sells real ale - but only in the evening !
Hardknott Brewery outlet.

While I'm glad to see anywhere on the railway selling beer, as a committed alcoholic, I'm sad it's not open during the day. The service along there isn't exactly one for the evening trade and I'd have thought the nice old dears would have liked a tea room. Still... BOOZE!