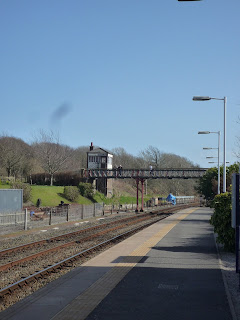 Fifty percent of my readers are now saying "that's a pretty name."  The other fifty percent are aroused.  I am neither.  I hear 'Ravenglass' and think "that'd make a good name for a Bond film".  ("Good evening Mr Bond.  My name is Henrik Ravenglass.  Welcome to my moonbase.")

For Northern Rail, Ravenglass is just another station on the Cumbrian Coast Line.  It's not a request stop, admittedly, but apart from that it could be anywhere.  Couple of platforms, no booking office, little shelter to hide you from the wind on the bay. 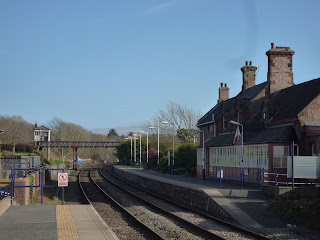 The platforms are staggered, rather than opposite one another, but apart from that, same old same old. 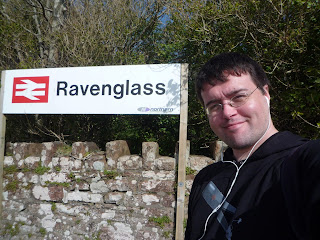 Ravenglass's true fame is as the terminus for the Ravenglass and Eskdale railway.  This is a preserved narrow-gauge line which has become internationally famous, and a massive tourist attraction in the region.  It's so popular, in fact, that they ran out of historic engines and had to build brand new ones.  I'd missed the last train out of there (besides, if I'd got it, I'd have just been dumped in the hills with no way back) so there was little point in looking.  I did see one of the tiny engines cross over the bridge above me, like Thomas making his escape. 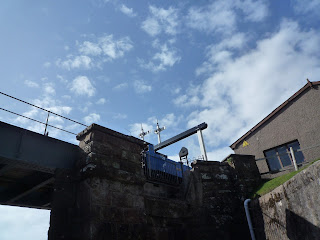 Instead, I headed down to the port.  Ravenglass is built at the estuary of three rivers, the Esk, the Mite and the Irk, and in the evening light it was astonishingly pretty. 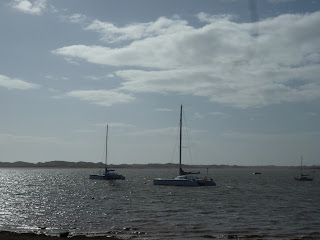 There's been a harbour here since Roman times, with antiquities all around the bay.  It's a sheltered spot - there was barely any wind coming across the water, even on a fairly gusty April evening.  It lapped against the low beach, a repetitive trickle of calm.

A calm that could have been interrupted at any time by gunfire and explosions. 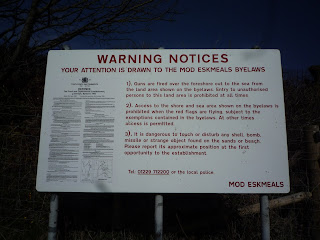 "Yes dear OH MY GOD PUT THAT DOWN RIGHT NOW!"

At that moment in time it was difficult to imagine any kind of violent incursion into the idyll. 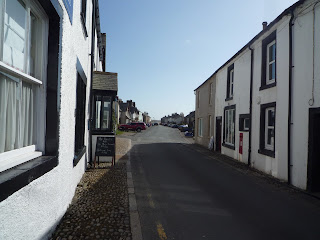 I went into what's technically the Main Street, but which is in reality a small lane.  It was all very French Lieutenant's Woman; Meryl Streep could have popped up in a Scottish Widows frock and I wouldn't have batted an eyelid.  There were a couple of bread and breakfasts, a couple of places that probably served cream teas in high summer, a big car park.  I cast an eye over the community notice boards, often one of my favourite things about little villages: there were notices from the Environment Agency about flood warnings and where to get sand bags.  A notice of the County Council elections, an antiques fair in the parish hall, a book fair ("Literate dogs welcome").  Another St George's Day celebration with "traditional English food" and "Old Time Music Hall", which I bet is the woman who runs the Post Office dressed up like Marie Lloyd and telling blue jokes.

The village ran out and deposited me on the beach, Main Street turning directly into a slipway.  For a few moments I just stood and watched the sea, the little fishing boats, the birds. 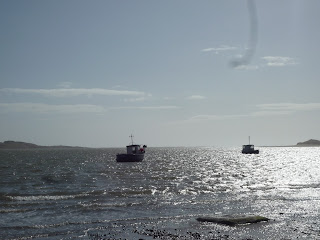 I walked back along the beach, round the back of the houses.  For a moment I was envious of them and their view, and then I remembered that "what to do if there's a flood" poster and was glad I lived on a hill. 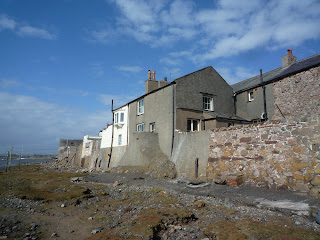 Having exhausted the village and its views, I headed for a drink.  The old railway building has been turned into a pub (but of course it has) so I wandered up and ordered a pint and had a bit of a think to myself. 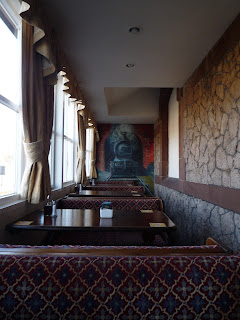 As I sat down, the barmaid with the underbite began singing along to Waterloo on the radio.  Obviously: everyone sings along to Waterloo.  They were playing Chris Tarrant, which was odd to me, as I didn't realise he still did the radio; I thought he just slept all day on his mattress made out of fivers from his Who Wants To Be A Millionaire? money.  A bit more listening and I realised it was Radio Two: Tarrant was filling in for Chris Evans, who was ill.

Of course it was Radio Two: there would be no other radio station to play in here (maybe Radio Three at a push).  Radio Two is the home of the terminally nostalgic, as was Ravenglass.  I just don't buy into it.  I could enjoy the odd ride on a steam train, just about, and a nice station done up like it's 1948.  It's not real though, is it?  It's all a construct.

(Chris read out a dedication, starting with "dear Chris": I immediately thought of when Victoria Wood's Kitty filled in for the agony aunt - "Dear Kitty (it actually says Arabella)").

Real railways - ones that actually take you places - they're a proper thing.  They're a reality I can get behind. They're a bit grubby, they get late and cancelled and they're full of drunken teenagers playing dubstep on their iPhones, but they have a purpose.  These narrow gauge and preserved railways and steam trains - bless them for doing it, bless all those nice men with beards who spend their weekends squatting over a piston - but I just don't care.  (And it's absolutely nothing to do with the fact that I can never remember how to spell 'gauge'). 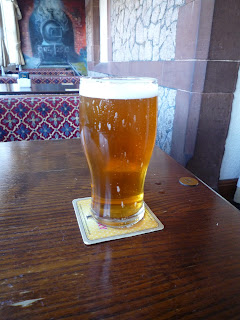 It's all wrapped up in a nostalgia that I don't have.  Trains have always been electric for me; I grew up right next to the electrified BedPan line.  I'd go up to London on an electric train and then get on an electric Tube train.  Then I moved to Merseyside, where the electrics were underneath instead of on top, but they were still the same smooth, quiet, swift trains.  There were rubbish diesels going out of Lime Street, but I could see they were rubbish because they were noisy and dirty.

Steam trains are even noisier and even dirtier.  They're not as fast.  They use tonnes of coal and have to be filled with water after a while.  Being nostalgic for them is, to me, like being nostalgic for the good old days of outside toilets: yes, I'm sure you have many amusing stories about peeing in the dark on a cold night but we've moved on now.  You don't need to do it any more.

It's also a very specific brand of nostalgia, a nostalgia for a period roughly about 1953.  The Victorians were too remote and technologically unsophisticated; the Edwardians were the same, but with smaller hats.  The World Wars mean restrictions and blackout curtains and ugly troop carriers.  The 1930s have a certain appeal, because they had the big railway companies and rail travel was at its height, but it has to be carefully done - you don't want to end up with modernism or art deco or art nouveau slipped in there.  It's a domestic nostalgia, not the Poirot world of chrome and elegance; it's much more antimacassars and carpets and swirly wallpaper.

So the 1950s often gets the nod - those lozenge signs, the British Railways crest.  Adverts for familiar products done on tin.  This is where I start to get a bit uncomfortable, because often people who are nostalgic for the 1950s end up with a Daily Mail view of it.  Women knew their place and gay meant "happy" and there was still an Empire.  A slight prod and they'll talk about the evils of political correctness, which is often their way of saying "I'm not allowed to say coloureds any more".  That's not everyone, of course; there are plenty of lovely people who work on old railways and who aren't potential UKIP voters.  I'm generalising hopelessly, but it's just an undercurrent that I don't like about these old railways.

I should also point out that there's a difference between history and nostalgia.  History is educational and worthy; history is about preservation and maintenance.  The Ravenglass & Eskdale Railway made brand new engines, but built them to the old standards and made them steam engines.  In the 1970s and 1980s.  The Northern Rock made its railway debut in 1978, when punk was in the charts and kids were playing with Atari 2600s and Concorde was flying to New York in three hours.  That's the point where I say, "fellas, I think you're taking it a bit too far."  That's nostalgia.

As if on cue, Chris Tarrant starts talking to Jean Boht, who was doing a tour of nostalgic songs, with the life story of the Queen in the second half.  Funnily enough, the Ratty Arms featured a life-sized standee of Her Majesty in the bar - I have no idea why; I hope it's a leftover from the Jubilee celebrations, and not something they all salute at the end of the evening.  Jean Boht - the former Ma Boswell - said that Elizabeth and Margaret played together as children "like any working class family".  That's pushing it, I feel.  Larking around in the nursery of your Piccadilly townhouse with your nanny and servants was not the typical experience for a working class child growing up in the 1930s.  I could almost hear her touching her forelock as she spoke. 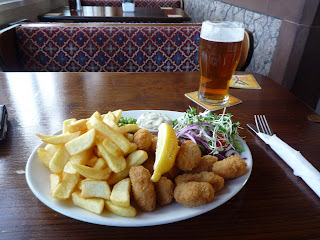 My scampi and chips arrived.  I'd felt a bit light headed from the pint of Bluebird and wanted to soak it up - I figured I'd get my tea here rather than back in Barrow.  The beer is CAMRA approved, because of course it is, but the food was disappointing.  Nine quid for a very standard pub meal, freshly defrosted.  I shovelled the deep fried fish in my mouth, washed the taste away with another pint, then headed back to the platform for the last train of the day.
Posted by Scott Willison at 12:00

If it's any mitigation, the Ravenglass & Eskdale may use modern/outdated steam engines but they do have a reasonably modern signalling system: the kind that, if it were installed on the "main" line, might make it economical to run later trains and on Sundays.

I've seen the photos, and some of the troops weren't at all ugly, but quite good looking