Day Three: This Is A Low (But It Won't Hurt You)

The streets had been washed the night before by heavy rain, but it looked like that would be it.  The sun was already burning off the excesses, reducing puddles to spots, creating steam on flat patches of concrete.  I jumped on the train out of Barrow and was in Askam a few minutes later. 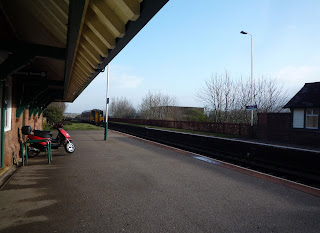 There were more people getting on than getting off.  Not really a surprise: Askam's an ugly little village.  It was founded for mine workers, and it still feels perfunctory.  Its position by the bay should make it a prime commuter spot but it felt as though the houses were there in spite of the sea - they could really have come from anywhere in the North.

Still, the station was nice enough.  Half of the long platform had been allowed to grass over, like a neatly tended lawn for trains.  Inside the open waiting room, there was still an iron hearth (no sign of a fire though).  I wondered if Northern Rail were aware of that nice architectural feature just sitting there doing nothing.  I'm guessing not, or they'd have ripped it out and flogged it to some builder in Didsbury who was restoring a turn of the century villa. 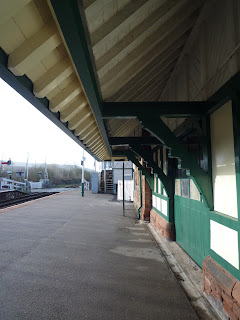 I did my best with the sign photo.  There was a bus stop outside, where some boys were waiting for their lift to school; I didn't want to look too much of an arse. 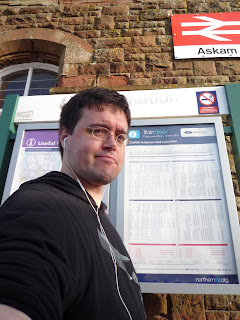 From there it was a straight walk down to the beach.  My only companions were dog walkers, hauling big heavy animals towards the dunes.  A playground was empty, the flaps on the recycling bins clattering in the wind.  Big red signs told me that there was no entry to a side road - "not any!".  An idle thought about what the locals got up to round here was answered by a poster stapled to a telegraph pole. 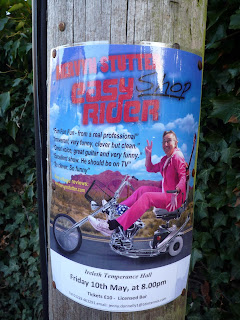 I stumbled down the slope to the beach - only noticing a flight of steps when I was halfway down - and took in the view.  A cool Cumbrian morning.  There was something silent and recessive about the sea that day, as though it was taking a breath.  It hid in the distance and made little noise. 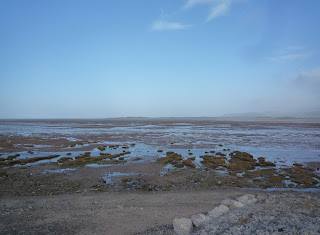 I took a right, shadowing the dunes northwards, sticking to the shingle where my feet wouldn't sink into the soft wet sand.  A man up ahead idly threw sticks for his mongrel, who then splashed happily through shallow pools to bring it back.  All of it under that amazing forever sky. 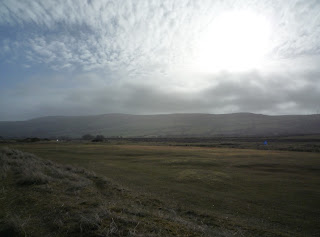 As I advanced I began to feel an uncomfortable tickle at the back of my head.  Just a spot of anxiety inside my skull.  This walk seemed to be taking a long time.  I had about ninety minutes to get to the next station, Kirkby-in-Furness, but I'd been walking for nearly half an hour and I couldn't see any sign of a village.  There was no sign of humanity at all, just endless rough grass and sand. 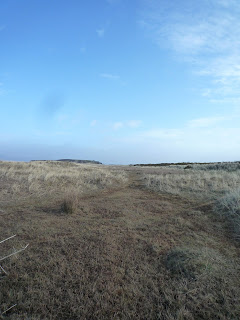 I pulled out my Ordnance Survey map and my phone so I could cross reference it with Google Maps (I often got the strongest signal in very unlikely places).  It homed in on my position with ease.  I was nowhere near Kirkby-in-Furness.  As in, absolutely bloody miles away.  As in, there was not a hope I would make it for the train.  Somewhere along the line I'd gone awry.  Either I'd planned it wrong back home, or I'd taken a different route out of the station.

Four times out of five I'd have had a small panic, a whizz through my maps and my timetables, and sorted out an alternative route.  I'd have just laid back and enjoyed the stroll and not really thought about it. 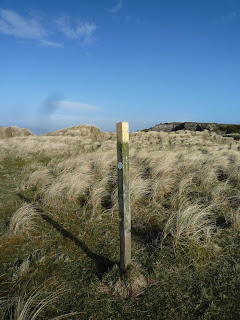 This was that fifth occasion.  This was the start of a spiral.  I felt that tightness and anger and frustration sweeping up and over me.  I was falling into a sink hole of depression.

I can feel it, the despair, the fury, the hatred, rising up inside my veins.  My head becomes tight, as though my brain is expanding inside me; my neck and my fingers and my legs become stiff as adrenaline courses through me, filling me with self-loathing.  At that moment in time I despised myself, my mind, my stupidity.

This probably sounds over the top to you, I know.  A complete overreaction.  Yes, it is, but it's the kind of thing that can trigger me off.  My depression - my low self-esteem - it's always there, and if I make a mistake, like planning the wrong route to a station, it turns on me.  Stupid cunt, it says to me.  Worthless.  Dumb.  Pathetic.

I started crying.  I was stumbling forward across the field, the blackness all around me, wanting to just lie down in the muck and stay there.  I was a stupid, pathetic, low human being, a complete nothing.  That ambitious plan I'd worked out in front of my computer back home, that little spreadsheet with walking times and station names and train times?  What a waste of time.  What a waste of space. 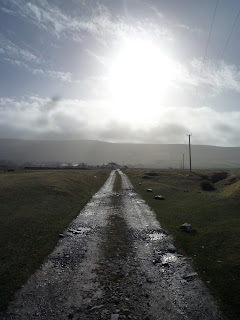 I was on autopilot from then on.  My legs just carried me forward while my mind fought with itself.  There was a bit of it still working - a bit that was telling me to step onto the verge when a car came up behind me, a bit that was stopping me from falling into the ditch at the side of the road - but most of it was concerned with hating myself.  I yanked up my hood so that I could hide under there.  The cheeky hoot of the train passing in the distance just rubbed it in.

There was a single moment of grace - a woman in a black Rover saw me staggering at the side of the road, and pulled over and offered me a lift.  I declined, because being with another human being would have just made me even worse (the social pressure on TOP of all that?  Never!) and she drove away.  A sign in the back of her car wobbled - This is Anfield.  A hundred miles away from home and Liverpool was still looking after me.

It was that distance that slowly pulled me out of the funk again.  I had no-one to rescue me.  I had no-one to help.  If I'd been at home, I could have gone to bed and slept the worst of it off.  Here, there wasn't anything to do but press on.  I had to just button it up and try and get past it.

I found a little bus shelter (the bus had passed long ago, coughing diesel at me as it did so) and sat down.  I took deep long breaths, trying to get my heart beat back under control.  I wiped at my face with a handkerchief, blew my nose.  I brought up Google Maps and calculated the distance to the station again - 0.8 miles.  Not so bad I tried to convince myself.  Nearly there.

I sat there a little while longer, feeling the blood pulse through my ears, letting the grim thoughts dissipate.  These depressive episodes suck the heart out of me.  For a while afterwards I'm reduced to a shell.  It's like someone hoovered out my insides and I have to grow a new interior. 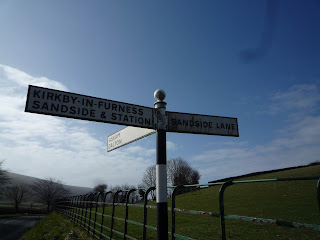 It meant that I probably didn't appreciate Kirkby-in-Furness as much as I probably should have.  I didn't find the irony of heading all the way up the coast to end up in Kirkby, of all places, quite as hilarious as I should have done.  I did notice that a garden centre had thrown up on every house in the village; every one was covered with gnomes, angels, wind charms, hand-painted wooden signs saying LOVE.  It was all a bit twee. 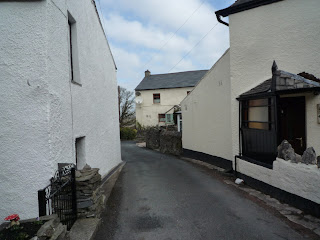 A real fire-and-brimstone church didn't help.  It looked terrifying, like that one Charlotte Coleman went to in Oranges are Not the Only Fruit.  Perhaps, I wondered, I should go in and see if they can banish my demons with a bit of faith healing? 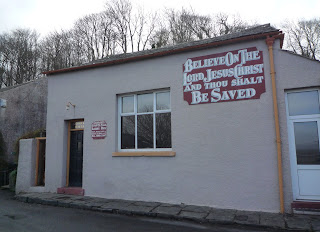 The sight of the railway station cheered me immensely.  Finally!  It didn't matter that it was a bit run-down.  It was there. 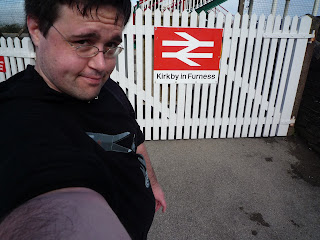 It was actually in quite a pretty spot, down by the coast, a beach right behind it. 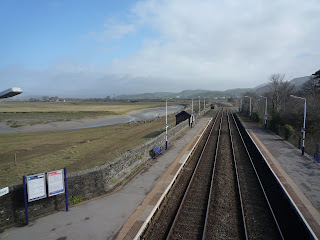 My next station, Foxfield, was even more desolate.  It was an island platform, the last stop before a bridge over a river.  Once again, there was no way for pedestrians cross, so I had resigned myself to an hour's wait on the platform for the next train. 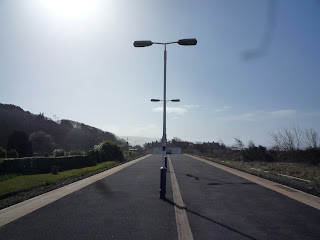 Maybe there'll be a cafe or something, I thought.  Nope. 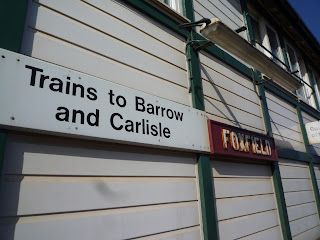 There was a pub, the Prince of Wales, but that was closed until 6pm.  Beyond that was a string of low houses and that was it.  The village itself was up a steep hill, well away from the station. 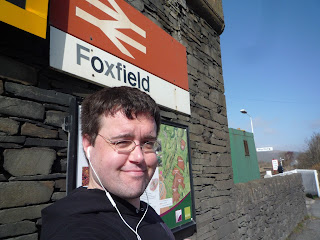 I went back to the waiting room to kill the time.  It was surprisingly chilly, the thick concrete walls not letting any of the outside warmth inside.  I'd barely sat down before three pensioners appeared in the doorway.  Lord knows where they came from; perhaps they apparated on the tracks.  There were only three chairs in the waiting room, so I gave mine up and went to sit on the platform, where it was warmer anyway.

Something twigged inside of me.  If those pensioners were there, it was because they were expecting a train. I could get that train out of Foxfield, rather than hover here with nothing to do, and go somewhere with a bit of civilisation.  I remembered there had been a little row of shops by the station in Askam.

Before long I was sat on the platform at Askam, a cup of tea in one hand, a bacon roll in the other.  The woman in the Humble Pie cafe had been cheery and friendly to me, a dose of much-needed humanity.  I guzzled the roll, licking the red sauce off eagerly, then sipped at the polystyrene cup of tea.  Never, ever underestimate the power of tea.  As it gurgled inside of me I felt warmth, cheer, comfort.  I felt refreshed and renewed.  I was back up to working levels again.
Posted by Scott Willison at 11:44

Have to remonstrate with regard to the use of rude words (c..t) in the fighting with depression bit. Otherwise I have to say it's made me look at my local stations in a new light.