I am, in many ways like a shark.  Not least because I have horribly sharp teeth and a strong dislike for Roy Scheider.  I need to keep moving at all times.  If I stop I tend to get weary.  My daily dose of drugs has a side effect of extreme tiredness; it's a rare day when I don't have to have at least one little nap.  If I can distract myself long enough and push through it I'm ok, but it'll get me in the end; after I got back from this Cumbria trip I was basically comatose for three days.

The net effect of my wait at Nethertown, despite Tina Fey's encouragement, was a certain lethargy.  My brain was a bit fuzzy and loose.  My carefully planned schedule - now a little wad of papier mache in my trouser pocket - called for me to stop at Corkickle, a request stop, and then walk into Whitehaven.  I felt lazy.  I felt tired.  I couldn't be bothered asking for the train to stop, so I thought, I'll just reverse it.  I'll walk back from Whitehaven to Corkickle. 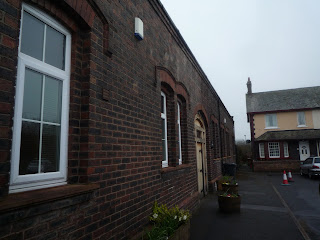 Some of the other passengers weren't so lazy, though, and as the train stopped at Corkickle anyway, I figured I'd just jump off.    It wasn't a nice stop; I was glad I'd be walking away from it, rather than towards it.  Another single platform, another bricked up ticket office. 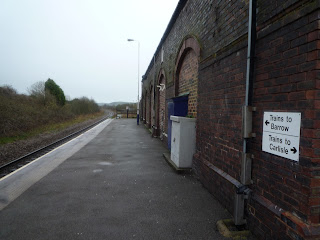 A man with an animal that might have been a dog, might have been a small dinosaur, got off ahead of me.  It snuffled and growled its way through the exit, so I gave it plenty of time to depart before I took my photo. 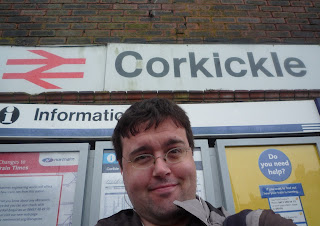 The road into town passed Whitehaven Castle - a disappointment.  I want turrets!  I want towers!  If you haven't got a moat, get the hell out.  It looked like a particularly dull stately home, one that had been converted into an office building in the 1970s. 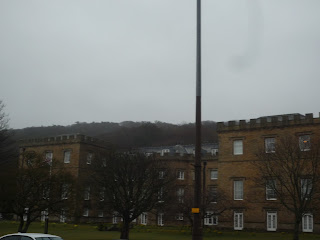 My eyelids were still drooping.  A dose of caffeine would be necessary.  There was a McDonalds by a supermarket, so I negotiated the drive thru entrance (they really weren't keen on customers sitting inside) and got myself one of their abominable coffees.  (I also got myself a Quarterpounder; it would have been rude not to).  McDonalds' coffee is so bad it's actually awe-inspiring - the idea that a company that big, with that much money, can't make a single cup of coffee taste better than Aldi's "Sweepings off the Factory Floor" Range.  It's like hot water poured over clay, then run through a sieve to remove anything approximating flavour.  This cup of filth's only virtue is the caffeine levels; they're somewhere just below toxic waste.

My coffee break gave the skies enough time to gather their forces again.  Wave after wave of heavy rain slammed against the window, while the winds ripped the door out of the hand of an old lady nipping in for a tea.

I braved the swells again to follow the road downhill, pausing only to snap a picture of a curious water fountain.  Apparently the man and his dog emerging from the stone wall are "literally stepping out of the past to meet us."  Preparing to drag us back with them into their hell, more like. 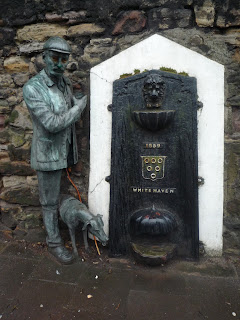 Still, Whitehaven was very pretty.  The town sprang up in the 17th and 18th centuries on the back of coal mining in the nearby hills; the port was created to ship it around the country.  It means it has a genteel, Georgian air to its architecture, with pleasingly symmetrical houses and carved flourishes on sills and pediments. 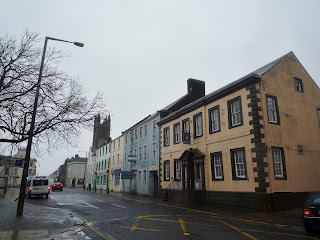 In the centre, the town's shopping centre seemed busy and pleasingly diverse.  The architects had adapted to the existing buildings, rather than slapping a corporate look over a perfectly adequate building.  Next time you're on a high street, look above the ground floor, and you'll often see a wealth of attractive features that have been ignored so they can install a giant illuminated Ladbrokes sign. 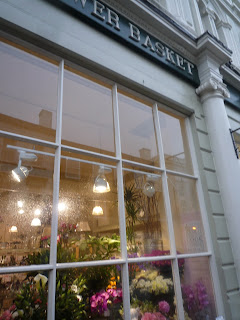 I passed The Rum Story, "the world's 1st exhibition depicting the Story of Rum", but wasn't tempted inside.  I don't like rum.  It's too fragrant for me - it hits your nose long before it reaches the back of your throat.  If it had been The Vodka Story or, better still, The Jack Daniels And Coke Story, well, that would have been a different matter. 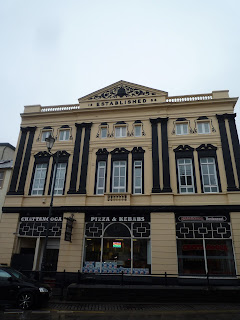 A sign board in the window of the local furniture shop advertised an upcoming production of Grease with photos of the cast in their 1950s garb.  If you thought the actors in the film were too old to play high school students, you should have seen this lot.  At least two of the T-Birds were bald, and Kenickie seemed to have just come back from his shift down the chippie.  Danny had a cigarette dangling from his mouth in the manner of a six year old who's sucked the top off a lollipop but won't let go of the stick, while Sandy wasn't so much "innocent naif" as "terrifying stage school princess ready to consume your soul with her semi-professional gnashers".  In short, it looked like a must see.  (It couldn't be any worse than my school production, where they couldn't afford to pay for the rights so they did, cough, Romeo and Juliet, with the students miming to Greased Lightning and some other random tracks and dialogue inserted just to keep the lawyers at bay.  I wasn't in that one - I did Fiddler on the Roof the following year which had proper singing and yes, my Motel was a triumph, thank you for asking). 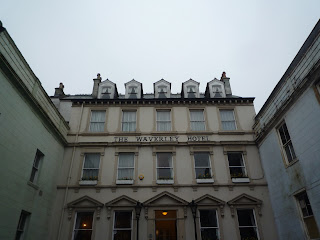 Whitehaven's clearly seen better days, but if you squint hard enough, you can detect the beauty underneath.  On a hot summer's day I expect it's wonderful.  In most places all you'd need was a quick lick of paint.  The former bus station, sadly, has been allowed to fall into disrepair, and is now to be demolished and replaced by a block of flats.  It's been condemned as unsafe, but I'd have liked to have seen that lovely 1930s entrance preserved in some way. 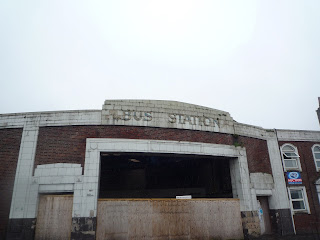 Pop quiz: somewhere in this photo is a railway station.  Can you spot it? 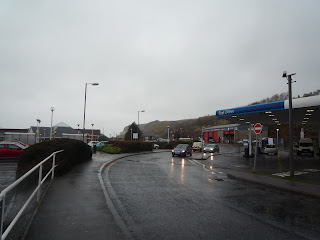 If you really, really concentrate, you can just about see the sign in the middle of all that Tesco business.  It's another station that sold its soul to the supermarkets in the 1980s.  The old building and associated tracks were swept away so that the people of Whitehaven could get slightly cheaper baked beans; in return, the railway got this: 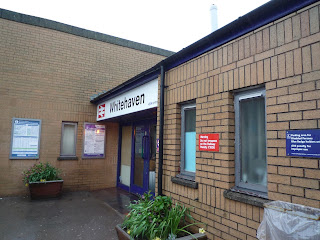 There were plans for a new transport exchange here, with a bus gyratory and maybe even a new station, but they were scrapped a couple of years ago.  A shame, as it would have made it more of a presence, rather than just this tiny cabin cowering behind a petrol station. 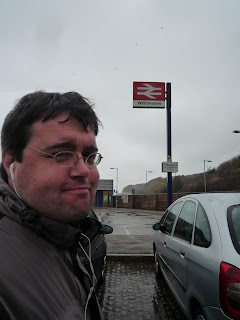 The station doesn't seem to have received an update since about 1985.  A sign in the car park warns that parking is "for British Rail business only"; inside another one says "invalid toilet facilities are available", which made me think they were broken, until I realised that it was invalid = disabled rather than invalid = not valid. 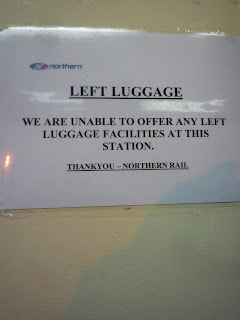 That deserves some kind of prize for going out of its way to be unhelpful.

Outside, there's a wide island platform.  There used to be four tracks here but various cutbacks mean that most are now gone.  You're left with a big lump of concrete and little shelter. 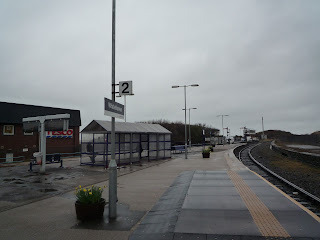 Once again, I was hit by a burst of accidie.  The next two stations were both request stops, and I only had time to visit one of them.  Sod it, I thought.  I'll just go to Workington and turn round and go home. 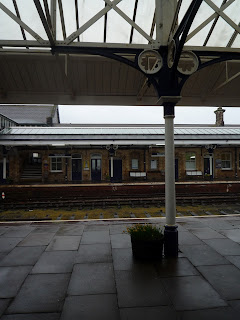 In my defence, Workington is a very nice station.  It's a proper Victorian through station which has been recently restored by Northern Rail (with some help from the Purple Gang). 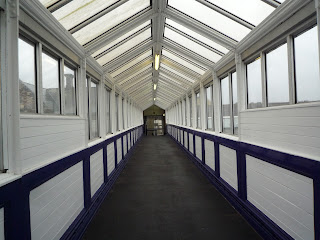 I nipped out into the car park for the sign shot.  It also gives you a good view of the yellowbrick building, and how well it's been cleaned up. 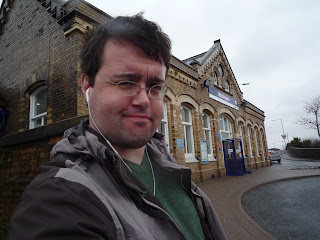 Inside there's a ticket hall/waiting area which, much to my delight, was warm and dry.  I positioned myself next to a radiator to wait for my train.  It was three quarters of an hour, but I really couldn't be bothered wandering into the town to have a poke round.  Sorry Workington.  The only irritation was a pair of very jumpy automatic doors that slid open if you glanced in their direction; I was continually assaulted by unwanted wafts.

My train was closing in, and I was feeling guilty.  It just seemed rude to bypass two stations without having a look.  It was ignorant.  In my febrile imagination, I pictured them insulted, crying, wondering what they'd done to insult me. 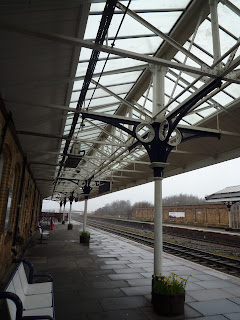 Down on the platform, I made a quick decision.  Parton.  I'd jump off at Parton, have a pint for an hour, then get the very last train back to Barrow. 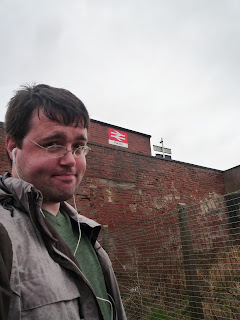 A stupid decision as it turned out.  Because Parton is quite easily one of the dumpiest places I have ever had the misfortune to linger in. 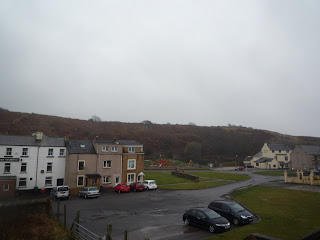 The main street lead into a cold, unwelcoming town square surrounded by ugly houses.  It was squeezed into a gap between the railway line and the hills and it was completely lacking in charm or charisma.  The playground was rusted.  The pubs were shut, possibly forever.  The war memorial was surrounded by a wall that looked like it had been built by a pensioner on his spare weekend.  A giant mural on the back of the village hall provided some colour, but seemed like the last gasp of a drowning man.  I didn't recognise this technicolor vista in the settlement before me.  The garden chairs at its foot, ready to accommodate the smokers, didn't help. 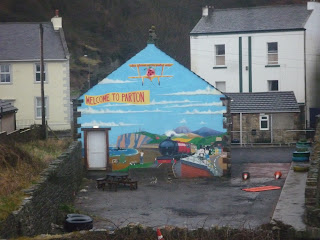 I did a couple of circuits in the hope of finding an upside to the place.  There wasn't one. 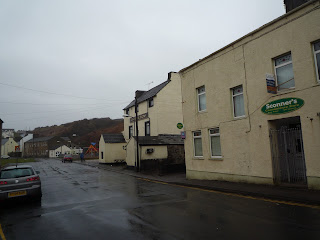 I wandered back to the station, where at least there was a shelter.  No-one cared about that either.  The steps were worn and mossy, the brickwork in desperate need of repointing.  Wonky signs were allowed to dangle precariously. 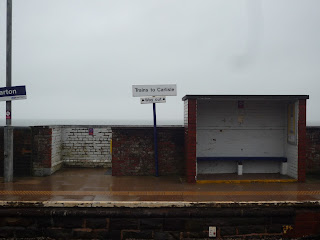 I sat in the miserable shelter, trying not to cast disapproving looks at a couple on the opposite platform who were trying to get pregnant through their clothes, and thought: how much more of this have I got?  How many more stations are there to go?  I wanted to go home.  Not to the Travelodge at Barrow, where I'd been moved rooms and was now in a repainted one that still stank of emulsion, but properly home.  I'd had enough of this.  One more day, I thought.  One more day.
Posted by Scott Willison at 10:47

Stick with it! Your audience applauds your doggedness!

Is there any sign of Workington North any more or did they tidy it all away as swiftly as they put it up?