While you had a nice relaxing Easter weekend, I had an altogether less pleasant experience.

I was roughly woken from my bed by two men.  That's not an unusual experience for me, if I'm honest, but this time a burlap sack was pulled over my head and I was dragged out the door. 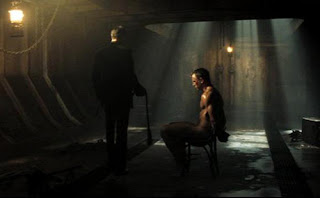 When it was whipped away again, I was in the rusting hulk of a canal barge.  It was almost exactly like that scene in Casino Royale, which is funny because my naked body is just like Daniel Craig's.  The two men were stood before me, stout and frightening.  They were wearing Northern Rail uniforms.

"We need to talk," they said.  "You've been tracking all over our network for months and we're sick of it."

"Really?  I thought I was always pretty nice about you," I said.

"It's not what you're writing," they replied.  "Vague whining about ticket offices, sore feet and unsubtle double entendres?  We couldn't give a toss about that.  It's your image."

I glanced down at my finely toned physique.  What possible complaint could they have?  The man on the left, who had a scar running down his cheek and a thin, pale moustache, leaned forward.  "Your blog is still yellow."

"And it still says Merseyrail on it."

"You're not doing that any more, though.  You finished all that last year.  We need it to reflect our corporate values.  We are here to enforce the colour scheme of our choice."

The one on the right, whose mouth was a slash of red across a pale face, recoiled in horror.  "How dare you!  We're not that mental.  We're the Purple Gang."

"Like the organisation Helmut Springer works for in Goldfinger?"

"Yes.  It's an amazing coincidence.  Anyway, we just want you to alter it a bit.  You can still write the same old rubbish you usually do.  We don't really care about that.  We just thought that after all these months you should pay us a bit of respect."

"I suppose you're right.  It seems only fair.  Will you invite me to your Christmas parties if I do?"

"Can I keep the smiley train?  Jamie did it really well, and let's face it, the gay couple with the flowers are adorable."

They whispered to one another, then came back to me.  "Yes.  You can keep it.  Basically it's the purple we're bothered about.  And get Northern Rail in there somewhere."

And there we are.  It's a new era: a new world of Round the north we go.  I hope you approve.  Actually, I don't care if you don't - it's my blog, so nyah - but personally I much prefer purple anyway.
Posted by Scott Willison at 11:23

Not quite as awful a purple as Northern paint their stations.

No bring back t yellow, northern stations are so dull, white to match t underground stations would be better