A few days ago Robert posted a pic on his Twitter feed of Aigburth station being improved.  "That looks interesting," I said.  "What's happening?"  "This," he said. 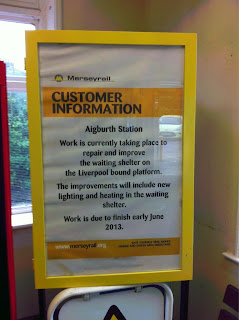 You couldn't possibly disagree with that, could you?

Yes you could.  Because right now Network Rail is pulling down the pretty wooden awning and the ironworks.  They're being taken away to be "held in storage" for a station that apparently deserves an attractive station more than Aigburth.  The ironwork, too, carted off to be stuck in a museum.  In its place will be one of those off the shelf waiting shelters, assembled in kit parts like a very dull Meccano model.

Stop this.  Stop this right now.

As this article makes clear, this isn't what rail users want.  I'm not sure they were even consulted.  There's a perfectly good waiting room at Aigburth already, just closed up: reopen it as has happened at Rock Ferry or Bromborough.  Leave the historic features - features which are nearly 140 years old.

It's astonishing that this has been allowed to happen and Network Rail, Merseytravel and Merseyrail should all be thoroughly ashamed.  The message being sent out here is that Aigburth doesn't deserve to look nice.  I thought we'd reached a stage in history where we realised that good, attractive architecture should be enhanced not demolished.  What next?  The closure of the ticket office?  Removing the platform indicators and chairs?  Closing it altogether?

Aigburth is a lovely station.  It's absolutely worth defending.  It's about more than that though, it's about making sure that Merseyside isn't second best.  Our railways are a real asset.  We need to make sure they remain so.
Posted by Scott Willison at 22:14

Well, if the planning application is to be believed (http://bit.ly/XokTRT) they are not removing the canopy entirely, just shortening it so it matches the length of the reopened waiting room. What's left will be
refurbished with new materials to match the old.

The "bus shelter" is in addition to the remaining canopy and waiting room.

If what actually happens matches the plans, I don't really have an objection. It's a shame to have a reduced length (fnarr) but it's balanced by the other improvements.

I feel bad for knee-jerkily retweeting that #SaveAigburthStation hashtag now. :-(

These works will not see the removal of the canopy as is being falsely circulated. The canopy will be shortened (losing three brackets which will go into storage - not used elsewhere). The shortened canopy will keep the original ironwork and appearance of the original. The waiting room, closed for years, will be opened up and then a waiting shelter provided in addition.

Communication from Network Rail has indeed been poor, however these works have been through the formal Planning Process which Liverpool City Council checked and approved (take note Councillor Tina Gould). This has been described as clandestine elsewhere, but the letter of the law under Permitted Development Rights has been followed.

I wish those who are so quick to jump on the bandwagon (Councillor's in particular) would search out the facts with half the alacrity first.

Planning Application 12PM/2712 for those who wish to seek the truth...

Yup, people (myself included, I have to admit) have seen the canopy being removed and assumed that it wouldn't be replaced.

I posted a link to the planning application in a comment yesterday but Blogger ate it, possibly because it had a bitly link in it. Let's try again: click here.

The drawings in the "related documents" section clearly show a shortened canopy, with some of the ironwork retained.

Of course, if Network Rail had explained this in the first place, the whole mess could have been avoided.

Now the work has been put on hold, but the canopy roof has been removed, so there is absolutely no shelter from the elements for passengers on the Liverpool platform. Not good for people who actually use the station, as opposed to bandwagon-jumping politicians.

A guess, but I would suggest at least one of the columns (the end double bracket) is not original to Aigburth and more likely to be from Garston or St Michaels canopies that were removed in the late 70s - it doesn't run in-line with the rest and it is a different design.