Past, Crescent and Future

Salford Crescent is a mess.

Opened in 1987, it consists of a single platform squeezed between the lines with a ticket office and waiting room perched on the end.  It was cheaply done, lazy, and embarrassingly underfunded.  No-one seems to have taken account of the hundreds of residents (many without private transport) who might use the station; no-one spotted the shops and businesses close by; no-one noticed that a direct route to Piccadilly and Victoria is always a good thing; no-one realised there was an enormous university directly next door even though it was built on a street called University Road.

The result is a station that bursts at the seams throughout the day.  We're not talking peak time rushes here; the constant influx of students, with their peculiar hours of "working" means that Salford Crescent is consistently busy from dawn till dusk.  Its single island platform is frequently rammed with people from one end to the other, as Ian and I discovered when we visited last year.

What's needed is a couple of extra platforms, but that's not happening.  Network Rail are spending £12 million pounds to improve the station, but new platforms (plus the attendant stairs, lifts and waiting areas) would push that cost so high you'd need a pair of binoculars to see it.  Instead, they've adopted the Liverpool Central method of shifting the deckchairs. 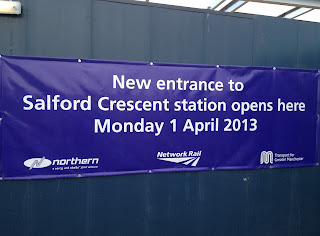 Ian and I had reached the station by walking down a side road to the footbridge.  That concrete structure is still there (for now), but behind it Network Rail have built a brand new bridge.  This one includes a lift, as the old station was inaccessible for those with mobility problems, and has a roof too.  The roof is important because it means that in bad weather, people won't be so keen to rush down to the protection of the platform - a small way of alleviating pressure. 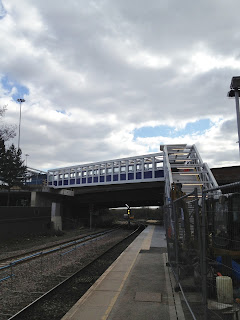 The new bridge is also much wider.  It leads directly to the other major improvement - a new ticket office.  As at Liverpool Central, where escalator equipment was moved to create circulation space on the platform, the ticket office is being moved away from trackside. 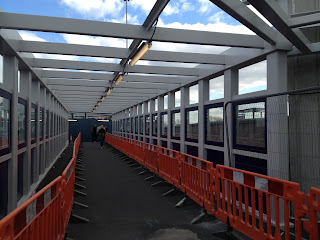 The new station building is another off-the-peg effort, similar to the one seen at Buckshaw Parkway; a McStation, if you will.  That's not to denigrate it though.  The new station will be clean, modern and accessible to all, none of which you can say about the current ticket hall.  The steelwork is rising up at the new entrance fronting the Crescent itself (the name is finally going to be accurate!). 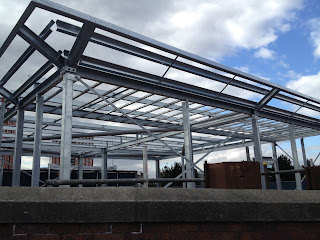 The interesting thing is how prominent the new station building will be.  With the road bridge on one side, and the University buildings set back from the Crescent, it's surrounded by space and so becomes a landmark.  It's a vote of confidence in the railway and a handy reminder to drivers stuck in the traffic into Manchester that there is another way. 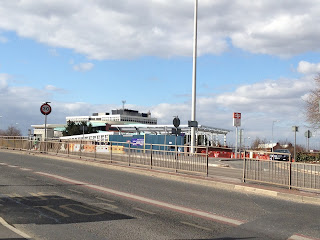 It doesn't change the fact that Salford Crescent needs more platforms.  What this development will buy Network Rail is time.  It'll give them a bit of breathing room to scrape together the funds for those more expensive improvements.  Come 2014 Salford Crescent will look a bit more like the station the city deserves.
Posted by Scott Willison at 11:13

Blimey, this all looks and sounds rather impressive. In all the years I lived in the north-west, I never encountered Salford Crescent being anything other than chilly (whatever the time of year), cramped and a bit creepy. I'll have to go back.