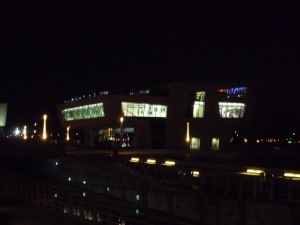 I crossed the Pier Head and looked up at the glowing white lights of the Ferry Terminal. Deep breaths. Calm. I'm going in.

It's safe to say I'm not a party person. I've had just one birthday party in my life, when I was five. The anxiety of it was so much - I was convinced nobody would turn up - my mum effectively put a stop to them for my own health. And today, as a fully grown adult, I prefer to loiter somewhere at the back, hidden away, generally with a drink or six. Or I just don't go.

"Don't go" was my first instinct when I got the following e-mail:

The Merseyrail management team and I would like to invite you to join us for our annual New Year Reception on Thursday 27th January 2011...

I mean, good God no. A party full of people I don't know? People I respect? Bart Schmeink? What am I going to do there? The Bf intervened at this point, however, and practically forced me to accept. "It'll be good for you," he said. And, after just the one panic attack, and doped up on my anti-depressants, I was walking through the door into the party and accepting a champagne cocktail and thinking, "how bad could it be?".

The invite had promised "entertainment". I wasn't sure what that would be. My only knowledge of corporate entertainment comes from Showgirls, where Nomi dances on top of a boat in a sparkly dress and then gets sexually harassed by a sleazy Asian businessman. Merseyrail have a different concept of the term; they had pupils from the Archbishop Beck Catholic High School playing the Theme from the Muppet Show on a trumpet. Hopefully none of them were molested by a skeezy man in a suit later in the evening. 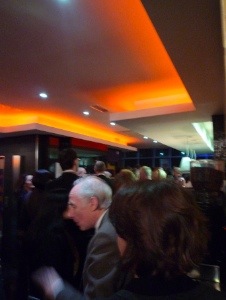 I did a couple of rounds of Matou, clutching a Jack Daniels and Coke, before I found a suitably tucked away corner and installed myself there. I was almost instantly leapt upon by two men, who turned out to be Rudi and Matt; the publicity mavens of Merseyrail. That's the problem with sticking your face all over your blog - people tend to recognise you. They were really nice, however, welcoming me to the party, offering to get me a drink, and not mentioning the fact that I was turning bright crimson throughout.

After a little chat, I went on another wander, and I found a seat at the back of the restaurant. Great. I could relax a bit. Which is when another man turned up and said, "Excuse me. Are you the Merseytart?"

Suddenly I wished I'd chosen a less daft name.

This guy turned out to be Ian from Merseytravel, who again had read my blog. "When are you going to finish it?" he asked, leading me to bluster about "enjoying it too much", which is a polite way of saying, "no idea". Ian then called over his colleague, Emma, who's responsible for the Art on the Network programme. I was reminded of a quote I read the other day, about blogging being all power and no responsibility, when she said "I understand you're not keen on the Grant Searl artwork?"

I managed to hold my own, I think, and I said that I really didn't like its positioning on Platform 2 - it competes and fights with Dream Passage. I did also say that I loved the other artwork, and the whole Art on the Network programme in general. Ian also explained about the riddles, hidden inside each painting; when all five are complete, the answer to the riddle will become clear. He said the actual solution is inside a safe at Merseytravel HQ right now, and I made a mental note to break out my leather all in one catsuit and burglars tools when I got home.

As we were talking, the speeches began, but sadly I was too far away to hear any of them, so I went out on the balcony for a bit of air. When they built the new Ferry Terminal, I remember thinking it was the wrong way round; the balcony was at the back, not overlooking the river. When I was up there though, I suddenly understood it. Firstly, there was hardly any wind, despite it being a blustery January night - the main block of Matou shielded it perfectly. Secondly, the view was beautiful. The three buildings of the Pier Head, high above me, glowing in the light (well, two of them were; the Cunard Building's currently covered in sheeting). It was awe-inspiring. 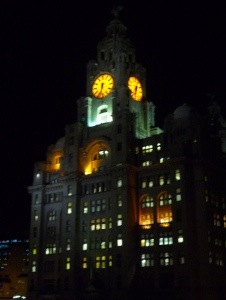 The speeches had all finished by the time I got inside, and a comedian was up there, telling jokes I couldn't hear instead. At that point, someone else introduced themselves to me. "Hello, I'm Mark. I'm the man responsible for the square loop on the map."

I don't know what went through my head at that moment, but I'm sure the word bollocks was in there somewhere. I wanted to just crawl away and die.

Fortunately, Mark was a very nice bloke, and he explained the rationale behind the square: there's a surfeit of tourists getting on at Lime Street, thinking they can go round and round the loop, and ending up in Birkenhead. The square was his initial suggestion as a way of making it clearer, but as he said, he's an engineer and he planned it out on Excel; he assumed the design team would make it look great. Instead, they just shoved a square on the map. He wasn't happy with it. Phew. Plus he's the man responsible for the line diagrams that are all over the place, which I love.

We had a good old chat, actually, about different design standards for the network, and the influence of Harry Beck's Underground diagram. I recommended he get Mark Ovenden's Metro Maps of the World, and actually I'd recommend it to anyone - it's a great read, and not too geeky. 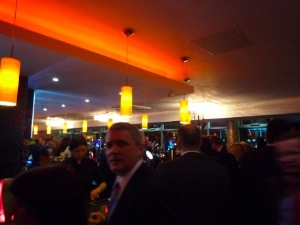 Rudi came over again, and said he liked the blog, then Matt asked me how I felt about being mentioned in Bart's speech?

"Eh?" I replied. Yup, apparently, HRH Bart Schmeink had actually told the room that I was there, but I hadn't heard it because I was at the back. Thank God, is all I can say, because I probably would have become the first person to cringe themself to death otherwise.

And then I was recognised again, by Steve, who manages the guards on the Wirral Line. I was actually starting to enjoy it, like the big old fame whore I am. It was nice to have other people making the effort to talk to me, because otherwise I'd just have hidden away and been silent all evening, and everyone was very complimentary about my blog. It was also nice that people seemed to read the blog for its entertainment value, not just in case I said something rude about Merseyrail. Steve and I had a chat, and he introduced me to Natalie, who's a newly appointed internet wiz; we talked about how she wants to really increase the web presence, and embrace social networks, and all sorts of exciting sounding things.

It was getting towards eight o'clock, and the party was thinning out, and I had to go home and get some dinner. There was lots of lovely looking finger food on display, but my tense stomach had twisted itself into a figure eight and there was no way I'd be able to swallow food. I just had one more thing to do: meet Bart Schmeink.

For the first time that evening, I went up to someone and introduced myself. And he recognised me! Really, by this point, I was starting to feel like Angelina Jolie, but without the breasts. Or Brad Pitt, unfortunately. What followed was a bit of a mutual appreciation society - we both said nice things about one another, we had a bit of a talk, he offered to buy me a drink - it was all very pleasant. And then he gave me his card, which was a silly move on his part. It's a bit like From Russia With Love, where Bond unknowingly invites Grant into his cabin on the Orient Express - he seems nice, but he's actually a raging nutcase underneath. (Please note: I'm the stalking nutcase in this scenario).

Well, nothing could match up to that, so I made a swift exit, behind two ladies. One of them turned to me and said, "I hope you're going to write nice things about us!" and I burbled some kind of reply through my blushes.

When I got outside, and I was halfway across the Pier Head, I just stopped and laughed. Really laughed. It was one of the strangest nights of my life but I'm glad it happened. I can't say I've overcome my party fears, but heck, I had a good time. That's something at least. Thanks to Merseyrail for the invite, and for being so nice. You didn't have to but you did, and you just went up about twenty notches in my estimation. (Yes, I'm that easily bought).

Oh my god! This is brilliant! I can't imagine being approached by all the people I'd bitched about online!

If anyone from Merseyrail's reading this now, could you please make the network maps a little more sexy? Like, say, the Paris Metro map. The Merseyrail ones are terribly clip art at the moment!

This is marvellous - three and a half years of blogging has been building to this moment. :)

I'm really glad you accepted that invitation. I love reading the blog and it's really nice it's being appreciated by the right people too.

I tried to find you there, but couldn't - you must have been hiding in that corner! Pleased some of my colleagues stole my "write nice things about us" line!

Rachael (from the M to go)

Arf, where was my invite? You should get that Mark guy intouch with me about squares & loops etc; certainly with the amount of ideas & proposals I've bored everyone with on SSC over the years.

Did you meet any of the Colour Tsars?

I think the Colour Tsars refused to attend because the building wasn't yellow and grey.

Reading the Metro maps of the world now, loaned to me by the colleague who put me in touch with this page in the first place. Been working up some other fun versions of the network map, a round one taking inspiration from the old 69 / barbed wire / catherine wheel MPTE logo and a couple of other varieties for fun rather than practical use. If I photographed them how could I post an image?