The passageway from Old Hall Street to the platforms at Moorfields is ridiculously long.  I mean, colossal.  By the time you emerge at the other end you expect to see Manchester Town Hall, not the back of the Echo building.

As built, it was also a little bit dull.  White tiles, white tiles and white tiles.  Which is fine in a public toilet, but in the throbbing centre of a city's transport system, not so much.

Over the years, Merseytravel have attempted to rectify this situation with some mosaic art in one section, and internationally themed display units provided by a local school at the other end.  It's not bad.  I've never actually covered it in the blog because it's in the Old Hall Street section, and I keep forgetting it's there: my instinct at Moorfields is always to turn left at the top of the escalators and head for the main exit.  Force of habit. 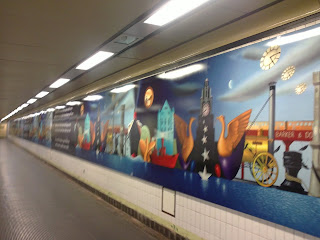 A couple of weeks ago another piece of art was erected in the corridor - the fourth section of the Animate the Underground project.  I have to admit, I wasn't keen on the first part of the scheme; I felt it was a bit twee, and it is definitely in the wrong place.  Putting that painting alongside the sublime Dream Passage is like asking your average bloke to stand next to Russell Tovey; all well and good, but look at what's to the left.  Fortunately the subsequent pieces have been a real improvement - at Lime Street, they liven the drab underpass, and at Hamilton Square the effect in the narrow corridor is brilliant, like entering another world. 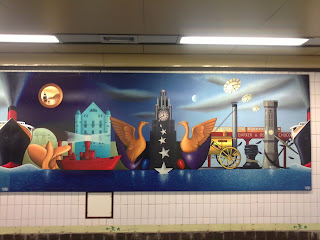 The new piece, The Birth of Liverpool, doesn't have the same dreamlike effect as the piece at Hamilton Square, but at least it's not overwhelmed by the rest of the art.  On the contrary it's Birth of Liverpool which draws your eye as you enter the passageway. 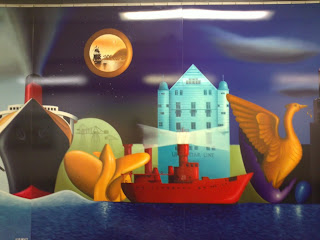 The theme here is the city's maritime history.  There's a liner and a lightship, the famous Jesse Hartley clock tower that stands at the entrance to the docks, and the White Star building. 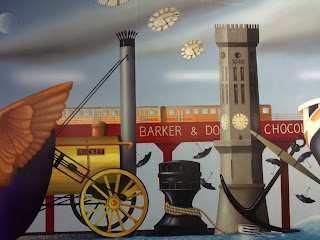 There's also, for reasons I can't quite fathom, Stevenson's Rocket.  Not sure why that's there.  The Overhead Railway's on there too, but at least that used to travel along the docks when it was around - the Rocket never even got a glimpse of the sea. 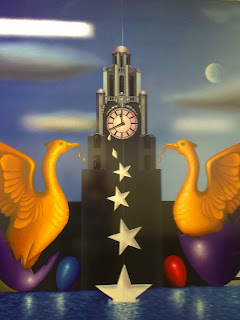 In the centre is the grand old bird of the Pier Head, the Liver Building.  The Liver Birds are hatching out to stand guard; there are also - sigh - blue and red eggs waiting to open.

And, of course, there's the riddle: 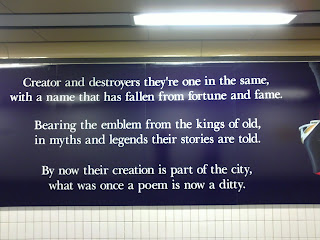 I have NO IDEA.  Not one clue where these things are leading us.  When all is finally revealed with the final poem at Central, I bet I still won't be able to work it out.  It may as well have been written in Swahili.

It's a very good piece; I especially like the way it meshes together, so that each repeated picture flows from the one before.  As a transport buff, I'm pleased to see the trains and boats, a potent reminder of the city's past.  Liverpool's a world class city in so many ways - it should be shouted from the rooftops.

Anyone got any idea about what the fifth mural will show?  It's Liverpool themed, and we've now had football, John Lennon, local artists, and the docks.  What icons are we still missing?  I'm going to take a punt at the two cathedrals.  Your suggestions are gratefully received!

If you're right about the cathedrals I'd expect St John's Tower to be there too.

From the reproductions on the artist's website, the cathedrals are in the background of the football one.

I have no idea where it's going either, but surely this one is something to do with Liver Birds?