It's a well documented fact that I love Merseytravel's Art on the Network programme. Just click the "art" tag on the right; you'll find a series of love letters to the various bits of art that have sprung up all over the system. To me this is a really good way to enrich the local area - the station environments are enhanced and artists are funded and commissioned by a big company. Win-win.

So far, there have been sculptures, paintings and word poems, and they've all rang my bell, so to speak. Stephen Hitchin's Time and Place at Birkenhead Park makes me smile every time I see it.

The newest series from Merseytravel is entitled "Animate the Underground" and is a series of five paintings - one for each of the underground stations - by the artist Grant Searl. The first, One Life One Love One Liverpool, went up in James Street last November, but I only got a chance to have a proper look at it today.

Now obviously, art is subjective, and one man's masterpiece is another man's toilet paper. But my immediate reaction is - urgh. I really, really don't like it. 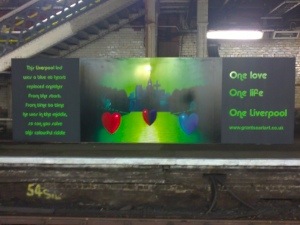 Full disclosure - I hate football, so the topic of one city united by a love of the Reds and the Blues is not my cup of tea anyway. It's hard for me to engage with the subject. But leaving that aside, I can't help feeling that the work is just not very good. It looks like a greeting card, with the sickly green airbrushing and the hearts. It doesn't inspire or delight me in any way. It just sits there.

It's made worse by its positioning. Merseytravel have sited it on the disused platform 2 at James Street - alongside Chalk & Grime's Dream Passage. Now THAT is a great, beautiful piece of artwork, which is still as interesting and as unusual today as it was when it was installed twenty years ago. Beside that piece of intriguing art, One Life One Love One Liverpool looks trite and unimaginative. It should have been sited somewhere else - perhaps by the elevators, or in the ticket hall, or basically anywhere else. It just doesn't work on that platform. I might like it more if it were in isolation rather than detracting from Dream Passage.

Grant Searl has four more pieces to come; one has already been installed at Lime Street Underground. These might be more to my taste, as the other stations don't have artwork and could do with brightening up a bit. I should note that the Lime Street one is based around John Lennon though, which makes my heart sink some more. It's another unimaginative commission.

The results of the Art on the Network competition still haven't been announced, so there's still hope there. I still think Merseytravel's public arts policy is a wonderful thing. I guess they just can't please me all the time.

Email ThisBlogThis!Share to TwitterShare to FacebookShare to Pinterest
Labels: Animate the Underground, art, Art on the Network, James Street, Merseytravel

What are elevators? ;-) Chris.

It looks worse than a normal greeting card, it looks like one of those dreadful corporate greetings cards you sometimes get. I half-expect it to say "Season's Greetings from your local Liberal Democrats" in the corner.