It's been a very long time since I ranted about the Merseyrail map, for one good reason: it's not been fiddled with in ages.  One day it'll be changed again, but until that time, I'll keep my powder dry.

However, there are related crimes against mappitude.  I was looking at the Liverpool South Parkway section on the Merseytravel website, because I might be over there on Wednesday and I couldn't remember the number of the bus to and from the airport.  While I was there, I came upon what I can only describe as a mess:


I'm sorry in advance to the hard-working designers at Merseytravel (especially since last time I criticised the map I then ended up meeting the man responsible) but really?  The map is there to show you how to get to South Parkway from all over the North.  As such, it has to show a lot of stations.  Fair enough - that's a difficult job.  I can't help thinking there might be a better way of doing it though.

I'm going to run through some of the most heinous crimes I can spot.  The major one for me is that this is a map whose entire purpose is to show you how to get to Liverpool South Parkway.  So where is it on the map?  Over on the very far left, in a not very prominent box: 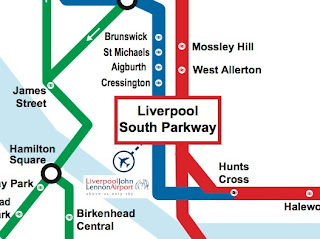 It's only a slightly larger font and it's in a box that's the same colour as the background.  Worse still, the airport - the reason there is such a large interchange with an intensive rail service - is barely visible.  Just a logo in the middle of the river, in the smallest font on the map.

Speaking of fonts, how about the different sizes used for the stations there?  Mossley Hill and West Allerton are fine, but the Northern line stations have all had their names squished to fit in alongside the Wirral Line.

As for the Wirral Line itself - I warn you now.  This isn't pretty:

Bloody hell.  I thought having a FUCKING SQUARE represent the Loop in the city centre was bad.  That's a work of genius compared to this nightmarish polygon.  What about that completely unnecessary kink between James Street and Hamilton Square?  How about West Kirby being further south than Ellesmere Port?  How about the entire Borderlands Line being coloured green as part of the Wirral Line?  It's especially heinous since this is Merseytravel's own baby - they have a vested interest in the Wirral Line.  You'd think they'd treat it with more respect.

Let's move on, before I rupture something.  Another key task of the map is to show where there are services that have direct trains to LSP, and services where it just goes to Liverpool city centre.  This leads to two line thicknesses, as seen below: 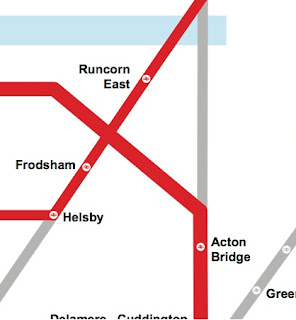 The key refers to the thick lines as "Merseyrail City Line services", which will probably come as a shock to the residents of Sheffield and Leeds who didn't realise they had such a direct link.  And let's not get into the debate about whether you can call a TransPennine Express train part of Merseyrail anyway.  That close up above also shows how horrible the little dots are for the stations.  Let's really zoom in on one of them, shall we?

IT'S A TINY BRITISH RAIL SIGN.  Why?  Why is it there?  It's virtually impossible to see, and it makes all the dots look like they have a hole in them.  It also means that large, prominent interchanges don't have a BR symbol in the middle, which seems illogical.

Perhaps it's to differentiate from the Metrolink stops because, oh yes, they're all on here as well: 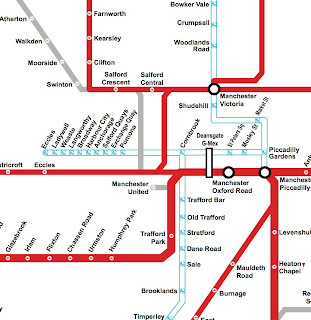 Again - why?  I have no idea.  Apparently a simple marker by the stations with a Metrolink interchange was deemed too simple.  Here's how the London Underground diagram shows a tram connection:

Instead we get the whole system (minus the recent extensions) threaded in amongst the railway lines in its own colour and style.  This also means that some serious jiggling has to be done to fit in the station names - look at the stretch between Cornbrook and Eccles versus the distance between Cornbrook and Sale.  (And look at how accommodating the Metrolink also means that there's a huge gap on the red line between Eccles and the city centre).  Incidentally, what's going on with "Deansgate G-Mex"?  A rectangle?  Not two interlinked circles, as is usual?  And, by the way, a rectangle which isn't explained on the key. 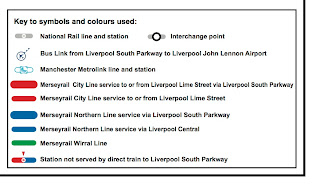 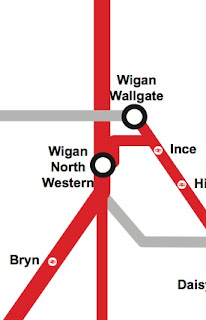 I know it's complicated here but that's a major fudge at Wigan North Western.  The lines merge together into a red blob which hides under the interchange circle.  It's extremely difficult to work out where, say, a train from Ince will go after North Western - does it continue to Bryn or head south?  Or maybe even north to Preston - where the line does something odd under the interchange circle again? 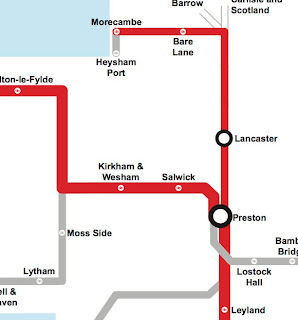 And in some places, the map is just plain ugly.  How about this: 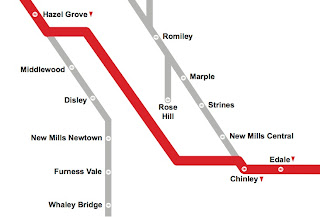 There's no need for that kink at Chinley.  It would have taken a moment more to have the red line continue a little further south so before turning and passing through the station and on to Edale in a straight clean line.  Like so much on this map though, it's overcomplicated, under planned and unattractive.

How would I improve this map?  I'd start again.  Chuck it all out and begin again.  Make LSP the focus, not an afterthought.  Get rid of the Metrolink.  In fact, get rid of a load of the stations.  Is every single one necessary?  If it doesn't have a direct link, does it need to be shown?

What you're aiming for, in effect, is the London Connections map.  That's a ridiculously complicated piece of draftsmanship.  It's got more colours than an explosion in Noel Edmonds sweater drawer.  Yet it's somehow far more legible and easy to read than this map.

This map is intended as a way of getting people to take the train to Liverpool South Parkway and from there to the Airport.  I don't think it's at all successful.  I think there needs to be thought about who this map is aimed at.
Posted by Scott Willison at 08:47

A network map has never actually made me laugh out loud before!

If that's keeping your powder dry, then I'm genuinely looking forward to reading a full-barrelled attack.

It's alright. Stop getting so worked up.

Admittedly I did wonder about the inclusion of the Stockport to Stalybridge line.

Don't forget an accurate depiction of which stations have the direct service and which don't! None of the Brum trains go through to International, but half of them DO stop at Smethwick GB!

Anonymous above is correct - add to that the many stations on the Liverpool to Blackpool line which should have red triangles but don't.

Also there is no "City Line" service to Morecambe any more, you have to change at Preston and Lancaster to get there from Liverpool these days.

Basically they've taken the original version from 2006 and updated it, but done a half-arsed job.

Overall it's a nice idea but the implementation is a mess. One for the Project Mapping team to tackle, perhaps?