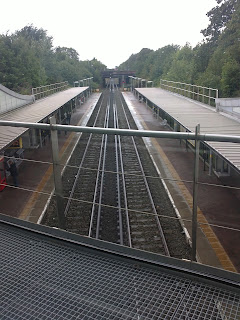 After my whinge, I thought it would be nice to write something pleasant and wholesome and positive.  So I went to Liverpool South Parkway.  It's a couple of years since I last went there and I have to say, it's a triumph.  It really is.  This former white elephant station is now a great, busy interchange with plenty of snazzy features.  A travel centre, instead of the ticket windows they used to have, staffed by two very jolly Asian men.  Ticket gates.  Lots of glass and art.  A talking toilet. 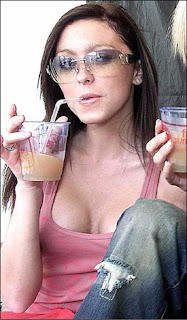 The last item was something I'd heard about (thanks to Robert) but I'd never experienced until today.   Let yourself into the metal cubicle and you get a thorough talking to from a robotic female voice.  She welcomes you.  She tells you how to lock the door.  She tells you where the toilet is (erm, thanks).  She tells you how to get the toilet paper.  She warns you (in her smooth, disconcertingly HAL from 2001 voice) that you've got fifteen minutes before the door is flung open and the toilet is cleaned automatically.  Frankly, she won't bloody shut up.  I was only in there for a pee and she was still talking when I was washing my hands.  Probably for the best; I didn't need instructions on how to shake my willy to minimise drips.

Also new (to me at least) is the cafe and passenger lounge.  The cafe is a Hamiltons (and yes, I know there should be an apostrophe, but I don't ever remember seeing one).  Can I ask: why does Natasha Hamilton have a stranglehold on the Scouse catering scene?  There's Hamiltons at the Ferry Terminal, at Lime Street, at the Airport.  She's cornered the market in paninis and lattes for the on-the-go traveller.  I liked Atomic Kitten as much as the next person, but I'm not sure that I really want the singer of Right Now forcing a croissant on me at every turn.  (Still, it's better to be a coffee shop mogul than the presenter of Snog, Marry, Avoid?  Poor Jenny Frost.).  She's missing a trick not opening one at Hamilton Square.

I decided not to bother with something from the cafe and headed for the comfy pleather seats in the lounge.  A lounge!  Fancy!  And even fancier, free wi-fi.  Absolutely brilliant.  It's a bit slow - you won't be able to play Call of Duty while you wait for your train - but it's fantastic to have a free wi-fi point instead of being forced to give BT Openzone your hard earned cash (or doing without).  I checked in on Foursquare with gleeful abandon; more of this please, Merseyrail.  I want to be Mayor of at least one station.

On top of all this, the station was clean and bright and well staffed.  I'm a gentleman so I won't dwell on the cute guard on the ticket gates as I headed down to the Northern Line.  It was lovely to see the line diagrams showing dozens and dozens of stations, all available from this station with the minimum of hassle.  And then it was a train into the city and I was in the yellow, busy world of Central. 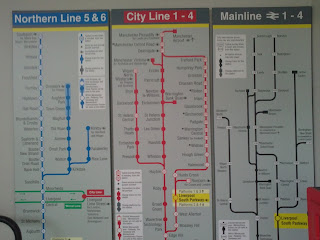 LSP really is a great station to use.  It's a shame the trams never reached here, because that really would have been the icing on the cake.  It shows than ambitious new transport projects can be a success on every level.
Posted by Scott Willison at 21:09

I am really enjoying your blog. After every trip to the UK I lament our lack of equivalent options.
I appreciate you taking the time to continue posting.
Thanks.
EPS - north of Seattle
eps4714@mac.com