I wasn't sure whether I wanted to visit Glasgow's new Riverside Museum.  On the one hand, it's a transport museum so - duh.  On the other hand, a brand new museum on a Saturday?  I could hear the screaming mass of hyperactive children, the bored parents, the hectic whirl of people visiting because it was new, not because they were interested. 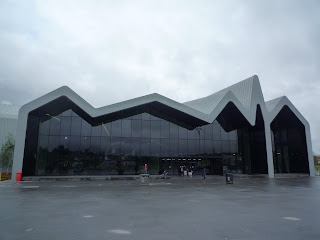 Fate intervened.  I'd walked down the well-signposted route from Partick station, across the dual carriageway, and I'd reached the museum five minutes before it opened.  There were already a few people milling around outside but I realised I could probably get in while it was still quiet.  Plus I needed a pee, and the good thing about museums is they have very clean toilets.

I walked around the Zaha Hadid building while I waited for the doors to open.  I love Hadid's work normally; her Aquatics Centre for the Olympics is one of the best new buildings in the country, and she's done some brilliant work elsewhere.  From the outside this one is disappointing.  It's a long metal tube, twisted a couple of times, with glass walls at either end.  The only thing stopping this from being indistinguishable from a B&Q Supercentre is the jagged roof, bursting up and down.  It's not enough though.  It's a bit like putting a huge bow on top of a gift wrapped in brown paper; nice try, but tokenistic. It certainly can't compare with the Museum of Liverpool. 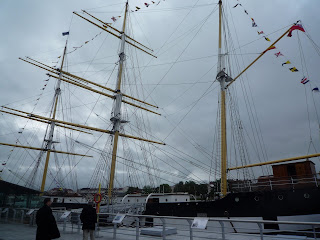 Its location in the new dockside is also in flux.  It's still in that stage where "iconic" buildings are being plonked down here and there to try and get people to visit, without being a living, breathing space.  Salford Quays has the same air, and twenty odd years later there are still parts of London's Docklands that feel empty.  I wandered round to the back of the building, where a tall ship has been moored.  Why hasn't Liverpool done this?  It's such a simple but brilliant attraction.  Stick it outside the Prince's Dock or the Revenues Building to get people to wander down the riverfront. 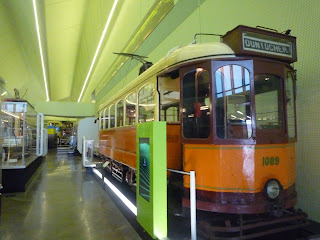 I stepped straight into the tram section, which was a nice surprise.  Genuine Glasgow trams and buses, along with interesting, informative panels and touch screens with videos.   An interesting variation on the normal transport museum was that the lives of the users were placed in context around the vehicles, so you had an idea of how the people lived.  There were features on the clothes and jobs of Glasgow's public transport users, and even a display with toys in it (which the cynic in me suspects was just there to catch the attention of Star Wars fans): 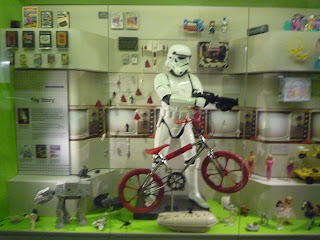 My brother had that AT-AT and the Rebel Transporter.  And the AT-ST.  And the Hoth Wampa: its arms were on a rubber band so you could spread them and slot a Star Wars figure inside in dramatic fashion.  We used to play with the figures in our garage with Darren Bell, except it wasn't Star Wars, it was an epic tale of survival after a spaceship crashed on a lava planet.  Such excitement.

Anyway.  Round the corner was a display entitled "Scotland's newest train", which had a prototype of the Desiros being rolled out across the country.  There was a caption that said "some suggestions from the drivers were taken on board before they were implemented" - yeah, I bet.  Ok, you can have a comfier seat, but we're going to have to say no to the free wi-fi and microwave oven. 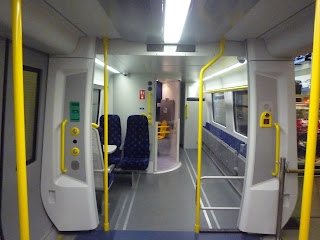 This was all very interesting, but I was here for the Subway display.  An old carriage had been set up with a screen at the end, so you could pretend you were on a train with a load of bored nineteenth century commuters.  It was dark but comforting, with all that wood and naked bulbs. 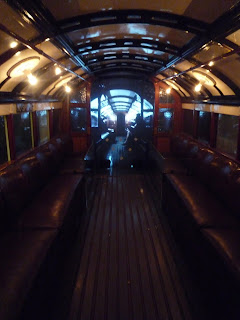 A sign on the wall reminded me that it wouldn't have been as nice as it looked.  Tuberculosis was rife throughout Glasgow, so your journey would have probably been shared with twenty men bringing up phlegm.  So much so that the trams and the subways all carried the same sign - funny and sad all at once: 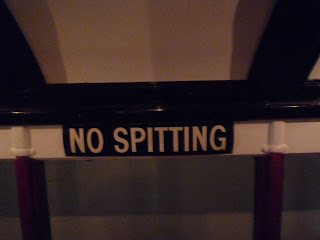 There was also a street scene - the classic standby of all provincial museums - but unlike most, you couldn't just stare at lacework through a window.  Here you could enter the bar, the cafe, the shop and see what the building was like inside.  And of course there was a subway station: 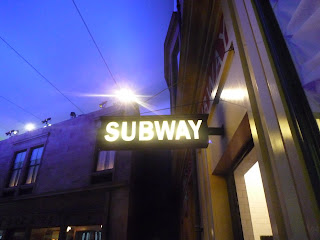 By this time the museum was filling up with kids, so I couldn't have a really good poke around without looking like a creepy uncle.  I may have missed some of the real glories of the street scene display.  Sorry about that.  What I saw of it looked excellent though. 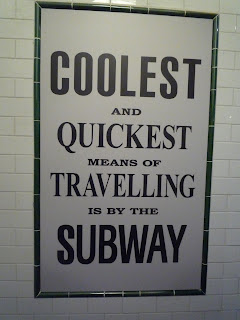 I'm choosing to believe that means "cool" as in "trendy".  Yeah, all the really hip guys spend their Saturdays riding the Subway.  Honest.

The main hall contained more trains, more buses, more cars; the world's oldest bicycle high above.   This was the glory of the building, an epic space that was crammed to bursting, all done out in a very nice green (which sadly looks insipid in the photos). There was some sort of fire service display outside - old fire engines and the like - so the building was saturated with firemen as well as screaming infants.  They weren't very hot firemen though, sadly. 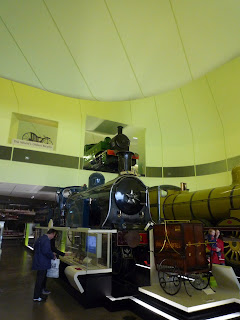 I had my pee and exited out the back, passing the Wall of Motorcycles and avoiding the gift shop for the sake of my bank balance.  It was interesting and well laid out.  I suspect if I was ten it would have been the best museum in the world.  I'm glad I went in the end.  I wish they'd have just opened it up for me, and not let the damn public in though. 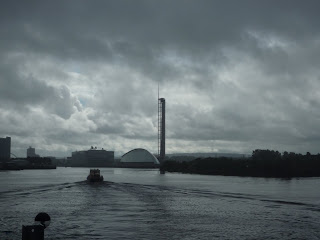 As is normal these days, the museum would really prefer it if you arrived by public transport.  I'm not sure why they're so bothered since it's next to a dual carriageway in the middle of nowhere and surrounded by a free car park.  However, they have subsidised a ferry service across the Clyde to take passengers to and from Govan, for access to the Subway.

I waited at the pier, and - well ok, I was a bit surprised.  I asked the man getting off the boat, "Is this the ferry to Govan?"

"Yes," he replied, looking at me like I was mentally deficient. 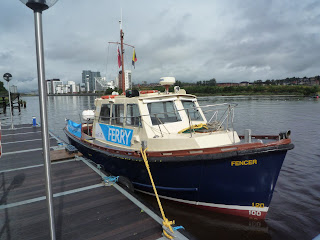 Let's be honest: it's not exactly the Royal Iris is it?  It's a tugboat with ideas above its station.  I was the only person to travel across to Govan, and the trip took only a couple of minutes.  It was a nice way to travel though, a more interesting way to cross the river than in a dark tunnel.

One last glimpse of the Clyde and the museum across the way, and then I turned inland to resume my circumnavigation of the Subway system. 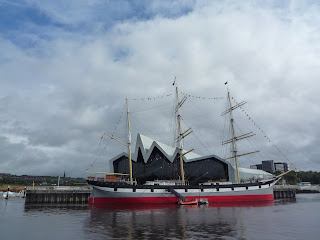 Email ThisBlogThis!Share to TwitterShare to FacebookShare to Pinterest
Labels: museums

To be fair, the tug does have a GREAT BIG SIGN on the side saying "FERRY".

Mine was bigger than yours :) Oh well they may have not opened the Museum just for you, but at least you got your own private tug boat ride!