Putting The Scott in Scotland

I'm going to apologise to Fort William in advance.  I probably didn't give you the attention you deserved, for two very good reasons:

a) I spent only two hours in the town, and
b) I had one testicle hanging out of my jeans while I was there.

I feel an explanation is probably needed for (b).

I'd got absolutely soaking wet walking to Birkenhead Park train station.  My cheapo jeans, bought from Sainsburys (I'm a fashion God), clung to my thighs and, at some point, I parted my legs and tore a four inch rip the length of my perineum.  Naturally, because my life is a very poor 1970s sex film, I didn't realise until my train was just pulling into Preston station.  I'd spent the best part of an hour, on display, as it were (by the way I should make it clear that I was wearing underwear; I wasn't entirely out).  Worse still, half of that journey had been spent sat opposite a teenage girl - I wonder if she went home and reported me.  If I end up on some kind of register, I'd like to make it clear, it was all an accident.

Luckily, no-one was around on the Sleeper to witness my testicular tragedy, but then we arrived in Fort William.  I needed to find a clothes shop, and fast. 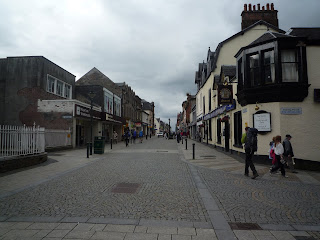 Don't take this the wrong way, Fort William, but you will never be mistaken for Oxford Street.  I had a street of shops ahead of me, but they mostly seemed to be Edinburgh Woollen Shops, whiskey stores, or places to buy crampons.  Fort William is the outdoor centre of Scotland - Ben Nevis is very close by - and so the town was filled with the kind of people who like scrambling up cliffs of an afternoon.  In short, there was nothing resembling a Gap.  Apart from the one in my trousers, obviously.

I waddled down the street, keeping my knees as close together as possible in case the rip got worse and the other testicle decided to join it, until I could dive into an M & Co.  I'd never heard of them before, but they seem to be like Ethel Austin, only, you know, solvent.  I found a pair of bland jeans in the sale, bought them from possibly the least interested shop assistant in Western Scotland, and then scurried off to find a public toilet  to change in.

With my old chap safely stowed, I could finally have a good look round.  Fort William's in a lovely spot.  It crouches on a bend in Loch Linnhe, between the mountains and the water, and the High Street threads along as best as it can.  Take a side road away from the shops, though, and you get a quite different view: 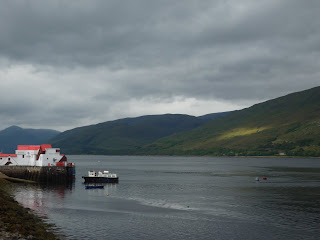 I stood on the quayside, just staring at the water.  Imagine seeing that every morning when you walk to work.  Mile after mile of beautiful unspoilt countryside.

Interestingly, I was stood on almost the exact site of Fort William's original station.  The Victorian building used to be here on the waterfront, convenient for the ferry pier.  In the 1970s though, the line was cut back to its present terminus, and the old railway line was turned into a bypass for the main street.  I thought the dual carriageway across the shorefront was a shame, but at least there were pedestrian crossings; imagine having to clamber across the tracks to get down to the water. 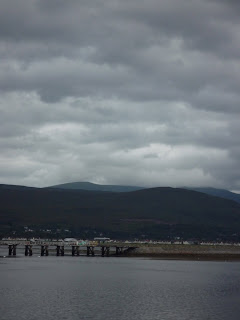 I finally tore myself away and headed back into the town.  I was incredibly hungry, but it was still early; contrary to what I'd been lead to believe, Scottish pubs don't open with the dawn chorus, and the few cafes that were open were already rammed with cagoule-wearing outdoors types.  I finally managed to get a sandwich, thankfully spending one of those rubbish looking Scottish ten pound notes in the process.  I'm sorry, but I cannot support any kind of Caledonian independence if the best they can come up with for the money is something that looks like it came out of a 1960s Monopoly set. 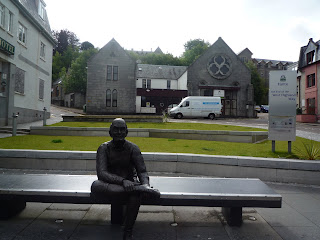 Gordon Square marks the end of the West Highland Way, and to commemorate this, they've built a statue of a man feeling his corns.

And that was about it.  I sat down in the gardens by the parish church for a rest.  I was starting to feel tired - I'd had only five hours sleep, after all.  Fort William is a pretty enough little town, but it's a hub, rather than a place to visit.  Why would you stay in town when you have all those beautiful mountains and lochs close by? 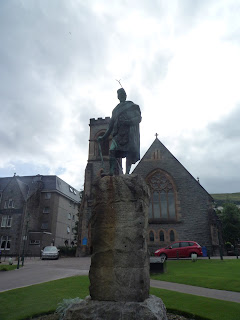 I had a train to catch back to Glasgow.  I would have stayed longer, if I could.  I would have loved to take a ferry out across the bay, or the steam train to Mallaig.  Plus it would be nice to see the town properly without worrying that my bits were going to make an unscheduled appearance.  But it was impossible to find a hotel room in town that was reasonably priced - mid-August is about as high season as you can get - and there are only two trains out of town.  It was a four hour journey, so if I wanted to get to Glasgow in a decent time I had to leave pretty early.  Not before the traditional sign picture though, of course: 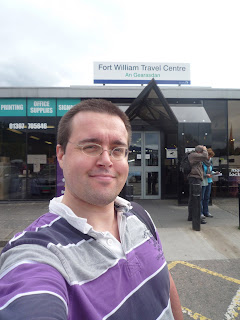 "Travel Centre"?  What's wrong with "train station"?  Just because there's a bus station next door it doesn't make it a hub.  It's a nice enough building, a bit bland, and as seems to be usual with all new train stations there's hardly anywhere to sit.  A bit of a problem with such an infrequent service and a lot of passengers. 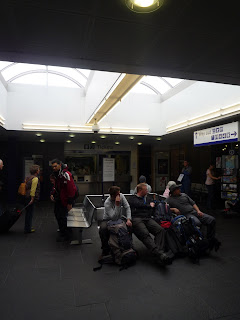 I dozed for most of the journey to Glasgow.  To be fair, it was exactly the same line I'd just come down, so I'd seen it before.  I woke up as we entered the suburbs of the city, and I watched station after station pass by.  I had no idea Glasgow had such a massive rail network.  The idea of being a "GlasgowTart" was very appealing.


As I stepped out of the underwhelming Glasgow Queen Street station, there were bagpipes playing.  No, really.  It was my first visit to the city... and I was already hooked. 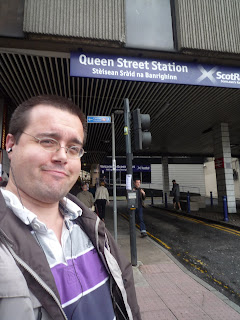 "Putting the Scott in Scotland"? I guess we're lucky you didn't visit Penistone.

Count your blessings, if he'd caught the sleeper to Arbroath instead, he might have visited the nearby village of Boysack.

I once saw some people doing a sort of 'high speed tarting' in Glasgow. At every stop one would take a photo of the other with the station name sign visible through the window behind them. P

Lightweights! How many times do I have to say it: if you don't pass through the ticket barriers IT DOESN'T COUNT!