Here, There and Everywhere

Last week I talked about the new piece of art at James Street station, the first of five commissions by Grant Searl. As I was passing from Lime Street Underground to the main line station en route to Widnes, I figured I could get a look at the second piece, The Madness of King John. 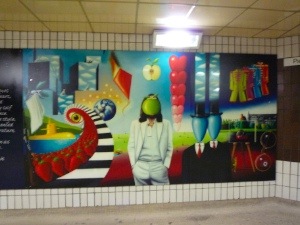 The good news is it's better than One Love One Life One Liverpool. The surrealistic imagery is much bolder here, with its clear and wittily executed homages to Magritte. It's a much more interesting piece as well, with plenty to take in - probably because it's sited in the Lime Street subway, so people have time to stop and get a closer look.
It stretches the length of the subway, subdivided by smaller portions and writings from the artist: 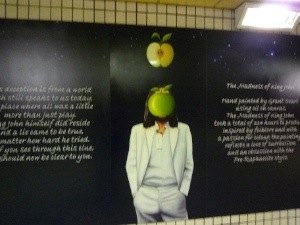 You could probably while away a good half an hour spotting all the allusions. If you could stand listening to a busker the whole time. 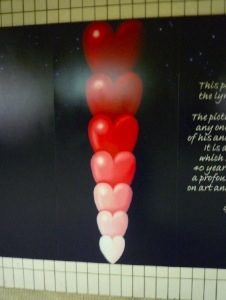 My biggest problem with it is John Lennon. Not him personally, but the fact that he's the subject. Again. Liverpool's rightly proud of its Beatles heritage, and it brings in a lot of visitors and a lot of money, but the city's moved on. Can't we just restrict it to the Beatles Story and the Cavern Quarter? It's all a bit tedious now and I don't think it presents such a great image to people who aren't in Liverpool for the Beatles - businessmen, day trippers, shoppers. It runs the risk of being "bloody hell, John Lennon again?" (And poor old Paul, George and Ringo, incidentally).
If there was going to be a tribute to Liverpool's musical heritage, how about all of it? How about a piece of work that interwove Billy Fury and Frankie Goes To Hollywood with Sir Simon Rattle and John Peel? How about a painting depicting OMD linking arms with The Coral, while Heidi from the Sugababes waved them on from the sidelines? Why not an Atomic Kitten triptych? Ok, maybe not that last one.
Wheeling Lennon out again feels regressive, predictable, dull. No matter how good Searl's work is - and his style is far better suited to this than the James Street piece - it's a bit Liverpool by numbers. It also makes me wonder what the last three pictures will be. We've already had "football" and "the Beatles"; perhaps Moorfields will soon be graced by a painting of Terry and Barry from Brookside stealing someone's hubcaps, just to continue the theme of Liverpool cliches. I'd like to see something a bit more rounded and defiantly Scouse. A piece of art that really inspired and made you think of Liverpool in a different way. 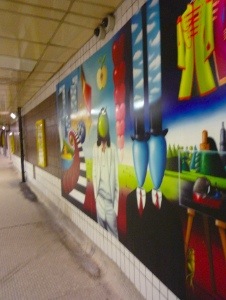 I don't think the city promotes the Beatles enough - Liverpool spent the years 1963 until Lennon's murder in 1980 giving the group the finger. Since then, the band are the city's biggest money earner. We need them whether folk like it or not.

Notice how in Liverpool it's Paul, George, Ringo and LENNON. People have long memories of his youth.....

No mention of Cilla?

I think Liverpool absolutely has something to owe to the Beatles, but especially in recent years, the city has moved beyond it. There is, and always will be plenty of Beatles heritage here; my point is that the city has so much else to offer, and it needs to not back itself into a corner.

Also I did consider mentioning Cilla but (a) she ran to Surrey as fast as her heels could carry her the minute she got a few bob and (b) she can't sing for toffee.