round the glasgow subway we go

If I'm honest, I had one reason and one reason only for going to Glasgow: the Subway.  My deep fascination with underground railways meant it was always going to be on my list of places to visit; it was just a question of when.

I decided to do my usual trick.  Head to a station, take the train one stop, then walk to the next one.  I checked out of my hotel (the Abode in Bath Street - not recommended; they don't even have wi-fi), topped myself up with a coffee and a pastry from Starbucks and headed for Cowcaddens.

This meant my introduction to the Subway's distinctive ticket office design, perhaps best described as "public toilet chic".  It's not their fault.  The ticket halls were constructed in the late Seventies when the whole system was closed for three years for a full and thorough refurbishment.  This was a different time, when the entire Western world was determined to make life as miserable as possible.  Entire government departments were devoted to constructing ugly buildings, designing ugly fashions and getting the worst possible music in the charts.  They didn't call it the Winter of Discontent lightly.  (Of course, this determination to make everyone hate themselves culminated in That Bloody Woman becoming Prime Minister, and let's face it, things could only get better after that.) 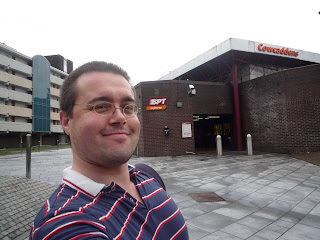 So this windowless brick cube will never win a design award.  It does the job well enough, and inside there is a manned ticket office and automatic gates.  I bought a Discovery ticket, giving me a day's travel on the Subway, and headed down the escalator to the platform. 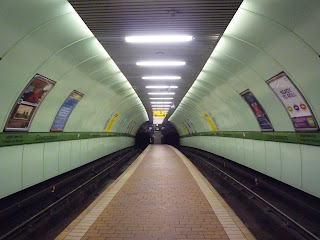 That's platform, singular.  The Subway system was built with two tunnels, one inside the other, and with a platform in between.  Despite the modern reclad and the tiled floor there was something distinctly old world about it - something retro.

I didn't have to wait long for a train.  Well, I think it was a train.  It looked like something you'd build out of Lego.  I knew it was going to be small, but it was incredibly tiny.  It was as though someone had looked at a Tube train and said "those are far too roomy.  Can we make them smaller?"

This is not a criticism.  I mean, it is, but it's also a celebration.  It's utterly charming.  You feel like you're going to have to crouch to get on board, and maybe stand with a crick in your neck, but no: inside it's just another train.  I might not be saying that at 8 am on a Monday morning but early on a Saturday it seemed like a perfectly adequate train to me.

Next was St George's Cross.  No, I take it back: St Georges Cross.  Where's the apostrophe, SPT?  Are you doing it just to annoy me?  Could you just not be bothered splashing out on the extra plastic for the sign? 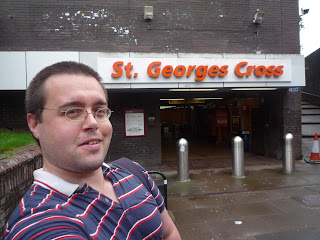 The station's buried in an underpass, so it's probably the most 1970s station you can get, short of having Suzi Quatro playing Devilgate Drive as you step off the train.  With this distinctly grim setting I wondered where I was going to end up.

It turns out, I was in a beautiful place.  I was almost immediately seduced as I walked along the Great Western Road.  Tall stone tenements with elegant shops on the ground floor.  Restaurants and wine bars.  It was seductive and boho.  I pictured myself sitting on a window seat, three floors up, sipping a cup of tea and watching the people go by.  Yes, I'd been there for all of two minutes and I was already planning my fake life there.  That's a very good sign. 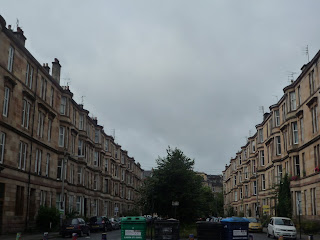 Kelvinbridge station has its own escalator down from street level, plus a car park out the back.  Quite surprising so close to the city.  A quick Wikipedia search reveals that there used to be a goods yard here for the surface line, which the Subway took advantage of.  It was just like being back on Merseyside, standing in a car park making a tit of myself. 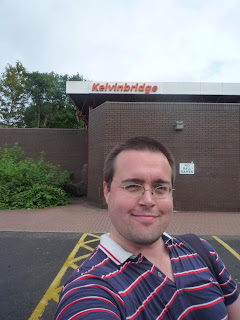 Down below I realised that each station had a different colour scheme: a modern version of the Leslie Green tiling schemes on the London Underground.  Each one had a different pastel shade - a contrast with the orange and brown of the ticket halls. 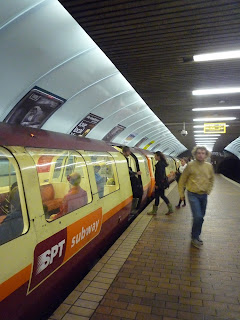 At Hillhead I got a bit of a surprise: two platforms!  The station's one of the busiest on the network, mainly because it's so close to the University, and so it was adapted during the shutdown for refurbishment in the late Seventies.  The existing island platform was made into the Inner Circle platform, while a second platform was formed to make a new Outer Circle platform.  A perspex shield was then erected to screen off the old side and to stop people plunging onto the tracks. 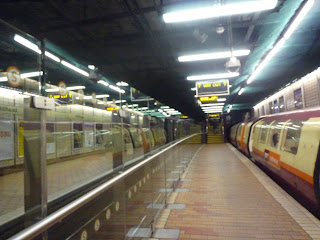 It meant I got my first glimpse of the new Subway logo - an orange S in a circle.  The system was called the Subway when it was first built, but in the 1930s it was changed to the much more British "Underground".  The name stuck with the Glaswegians though and in 2003 SPT finally gave up and just called it the Subway again.  It means that there's the odd mix of signposts around the city - some stations are pointed to with an S, some with a U. 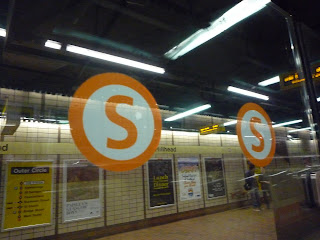 It's a great little logo - distinctive and classy.  It's got a very European feel.

Hillhead was in the middle of being refurbished.  There's a visualisation of the new look here.  The first thing that strikes you is - no more orange!  Well, still some orange, but in a very understated and modern way.  All glowing shiny lights with a mainly off-white look everywhere else.  I was a bit disappointed.  The orange and brown is very much of its time, and I wouldn't pick it today - but in 1977 it was incredibly groovy and up to date.  The redbrick station buildings are dull and dated from the outside but the interiors still seem fresh and exciting.  I wonder if they'll regret removing all these Seventies designs in thirty years time? 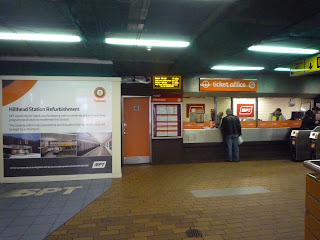 I had another station captured, anyway. 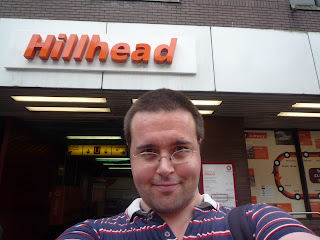 Onward to my second "Kelvin" station, Kelvinhall, which used to be called Partick Cross.  I wandered past delicatessens and bakeries and desperately resisted the urge to nip in and buy something snacky to munch on.  This walk round the city was going to help me lose weight; chomping on a pork pie would sort of ruin that effort.

Kelvinhall's one of the few stations that wasn't given its own funky building in the 1970s.  It's located underneath an apartment block, so it needs a big overhanging sign to give away its presence. 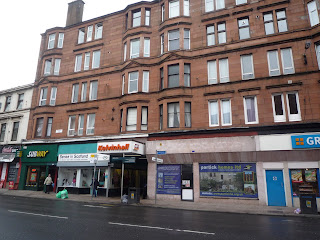 In fact the sign's so big I couldn't stand on the same side of the road to get it in.  So I apologise: you'll have to squint a bit to see it in the background. 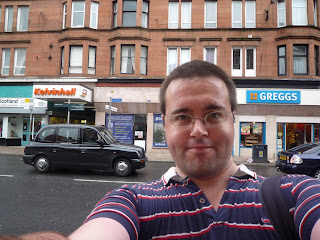 Heading into the arcade gave you an insight into what the Subway network must have been like before it was rebuilt.  After the Subway was opened in 1896 it was basically ignored for another eighty years; the only real change was the adaptation of the service from a cable railway to an electrified one.  The passageway to the station entrance was dark and grim - certainly not the gleaming future that Hillhead's being transformed into. 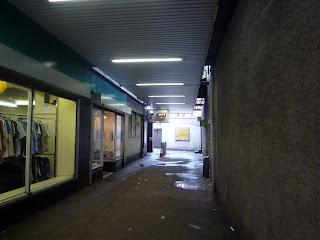 Thankfully the ticket hall itself has been refurbished to modern standards, and I was soon descending to the platform for my train.  An interesting side effect of the narrow island platforms is that there's no seats; it's lucky there's such a frequent service or you'd end up squatting on the floor.

Partick was something different.  Very different.  For starters, it had two platforms.  It was the only "new" station built during the refurbishment project, replacing one at Merkland Street, and so they built stations on opposite sides of the tunnels.  It immediately feels more spacious and grand - in fact, with the orange and the 1970s look, it reminded me of some of Paris's RER stations. 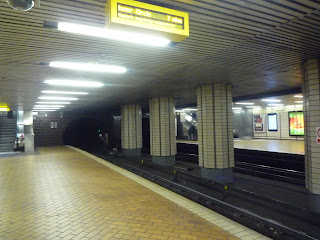 Heading up the escalator I saw another difference - white.  White ceilings, white walls, white lights.  It felt like I was rising up into the future. 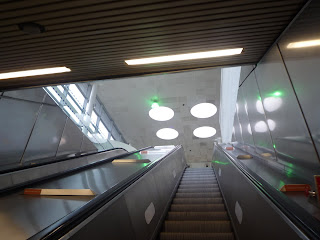 The reason the subway station was moved was so that it would be closer to the mainline station at Partick.  Then, in 2005, Strathclyde Passenger Transport tore it all down to build a proper interchange station, with a bus hub outside.  The replacement building is glass and steel and soaring staircases. 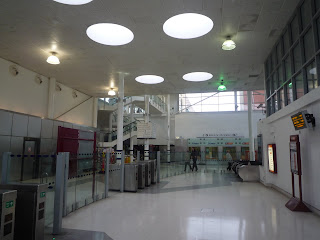 You know what else it is?  Charmless.  I know, I know; I'm always banging on about new developments and saying there should be gleaming surfaces everywhere.  But it just didn't feel as interesting as the orange and brown subway stations.  It was like a box with some platforms attached.  I couldn't warm to it. 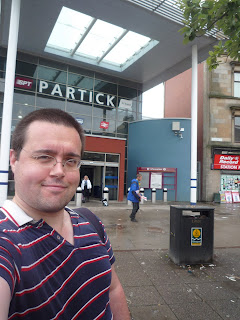 Poor Partick.  All that twenty first century effort and I just wanted to be back down below ground where I could play with toy trains amidst burnt umber tiling.  Perhaps this is a childhood thing: my mum's kitchen was bright orange when I was growing up.  Perhaps I just wanted to revisit my youth.

It was going to be a while before I'd return underground though.  I had a ferry to catch...
Posted by Scott Willison at 09:53

The only place in Scotland I've ever been is Dumfries & Galloway and when I told that to a Glaswegian they laughed at me and said that's essentially just England.

Would love to go on the subway. It looks so small. As well as a small actual railway, it looks just as much a huge kiddies trainset for some spoilt rich kid, bought in Harrods, ha!

Erm, I can't help but notice that after ranting about SPT's lack of apostrophe-based skills, you then commit the same sin yourself...

you need to get back up here man and get yourself on a subcrawl! the only way to see Glasgow underground: http://www.barcrawl.co.uk/pubcrawl.aspx?Crawl=896

Wow! Amazing collection of photographs you have from round the glasgow subway...