This Must Be An Underground Love

Since I was in London, I obviously took the opportunity to cruise the Tube.  If I'd been on my own, I'd now be presenting you with a lengthy gazetteer, with many, many pictures, and many gushing superlatives.  I wasn't alone though, so I politely restricted my Underground antics, just visiting stations I had to, instead of going out of my way to visit Upminster Bridge just for the heck of it. 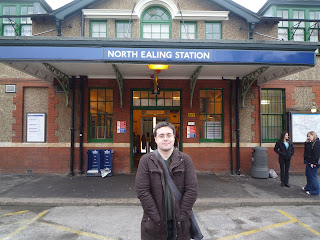 In an ideal world, this would be the first of half a dozen visits to stations with "Acton" in them.  There's an East Acton, a West, a North, a South, a Town and a Main Line all within a few hundred yards of one another.  I thought it would be funny (/not funny) to visit them all and add them to my earlier visit to Acton Bridge.  Unfortunately, TfL had closed down the western parts of the Central Line that weekend, ruling out half of them, so instead I proceeded to North Ealing instead. 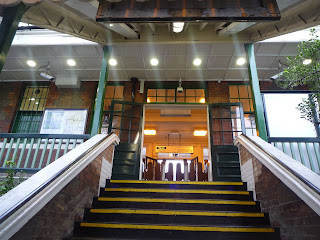 It's a pretty turn of the century station, with wooden canopies and an ironwork bridge crossing the tracks.  The below ground position and the copious trees mean you feel like you've arrived in a small country town, rather than a West London suburb. 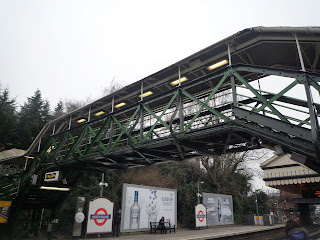 I particularly liked the roundels mounted on their own, elegantly curved boards on the platform.  The ticket office, meanwhile, was probably a lot nicer before they put in ticket gates; now it feels a bit cramped and inadequate.  The man in the ticket booth eyed me as I took the picture quickly. 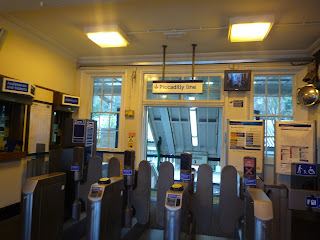 (If you're wondering why I'd trekked out to Ealing in the first place - we were heading to the Bridge Cafe, better known as Loser Cafe from The Apprentice.  We had a cup of tea there, but didn't purchase a £5.95 "You're Fired!" travel mug.  We're not that sad.)


The Western Avenue is a horrible road.  A traffic soaked mess of a dual carriageway lined with retail boxes, industrial units and wrecks of old warehouses.  It's one of the city's main roads, turning into the Euston Road in the East and the M40 in the West, and it's determinedly unlovely.


Except for Park Royal station. 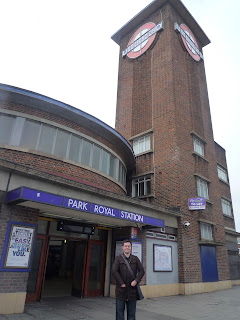 Park Royal is a two fingered gesture to the mass of belching trucks that pass by, a brick construction seemingly designed to make the drivers wish they were on the Tube instead.  The tower with the giant, glowing roundel is a beacon to attract you to the ticket hall below.  Even the name sounds far better than it should; Park Royal should be a space of green acreage, not a bunch of manky factories. 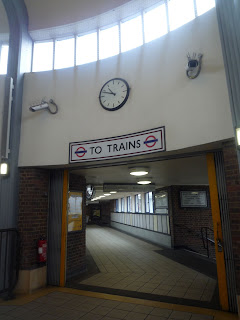 The 1930s features have been preserved as best as possible inside, with an original booth for ticket inspections still sitting in the centre, and signs in the between the wars all-caps style.  The preservation even extends to signs that aren't technically true any more; one at the head of the footbridge points you in the direction of trains to "Victoria, Mansion House & Monument", a relic of when the station was still served by the District Line.  TfL have had to put another sign underneath pointing out that this is just a heritage sign - ignore it.

The steps down to the platform are contained in glass boxes, maintaining the chunky brick look of the main building. 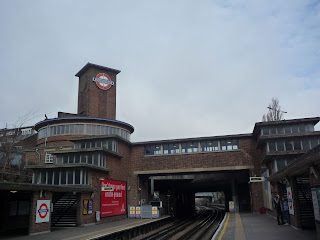 It mixes circles with straight lines, verticals with horizontals, but it all works.  There's even a little 1930s waiting room on the London-bound platform, with wooden seats.  It looks like a Charles Holden design, but it was actually designed by other hands, Welch & Lander, showing what an influence he had on the network.

I had to come here for the Depot, of course, but that didn't mean that Acton Town was just another station to be passed by.  This one is a Charles Holden design, and features what's known as a "Sudbury box", after the station it first appeared in. 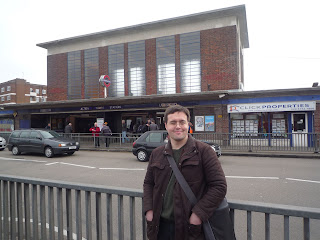 That high-ceilinged cube contains the ticket area, and acts as a marker to the station's location.  On either side are wings containing shops and station facilities.  The box has no practical purpose, really; you could have built the station perfectly well with a low ceiling.

Instead Holden created this massive light box, which allows the station to be floodlit during the day.  At night, it becomes an icon on the street, and makes it easy to find. 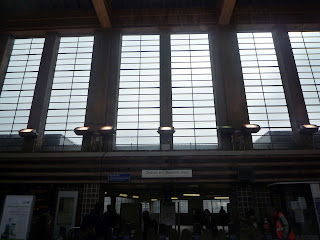 It's a feature that would be "rationalised" out of a station today.  Look at Buckshaw Parkway, which I just visited; its principal feature is the massive car park around it, leaving the station building shuffling its feet in the middle.  Or Bootle Oriel Road, which has been rebuilt in silver but doesn't have the same feeling of quality and warmth that Acton Town does.  Holden got it.  I wish he was still around. 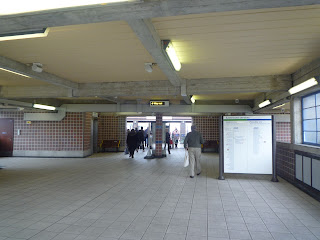 Even the passageways and bridges are spacious and easily navigated.  There was no need to create a separate bridge for passengers changing between lines - this open space at the top of the stairs would have done.  Holden did build an additional bridge though, meaning that those passengers are taken away from the crowds, and creating this glazed "square" where you can stare down onto the tracks. 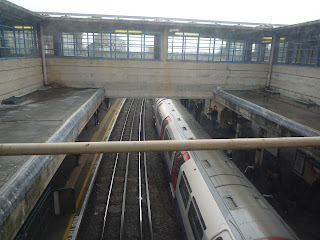 
You don't need me to tell you Westminster's amazing.  But I'm going to anyway. 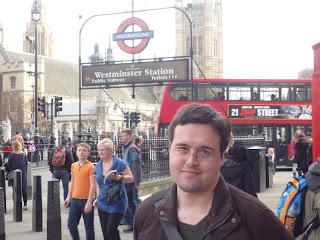 This is part of the magnificent Jubilee Line Extension, one of the few times modern transport overseers decided to put decent architecture on their 'to do' lists.  There are highlights all over the place - the spacious Stratford, the cavernous Canary Wharf, the small but charming Bermondsey - but Westminster is my favourite. 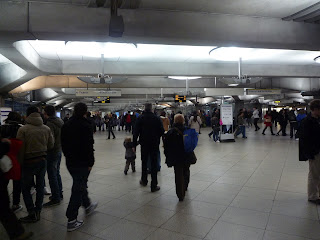 The low ceiling of the ticket hall is like an architect's joke.  He's preparing you for just another sub-surface station, until you take an escalator down.  And your jaw drops as you descend into a cavern, a modern version of the descent into the underworld. 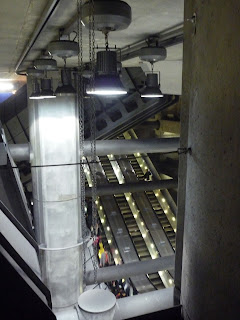 Deeper and deeper, amongst concrete and metal, into a dramatically lit world that intertwines passenger routes above and below you.  The escalators feel like they're suspended on gossamer threads between the stone pillars.  You can see people moving in other directions, but you'll never meet them.  The unfinished walls seem so much more interesting than bland white melanine.  It's imposing and delicate all at once. 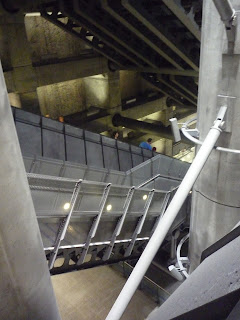 
Readers with memories for trivia might recall me visiting Blackfriars at Christmas.  At that time, the Underground station was still closed for rebuilding, but now it's open so I got off for a poke around. 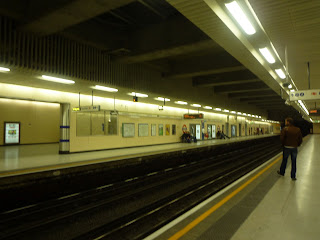 It's immediately obvious how much it's improved.  Everything feels a lot more spacious.  Wide vestibules have been carved out behind each platform to accommodate new escalators, removing the slightly confusing mess of steps and escalators that used to be here.  It's a much cleaner, simpler look - perhaps a little bland, with all that cream, but if my memory serves me right the old station was pink, so it could be worse. 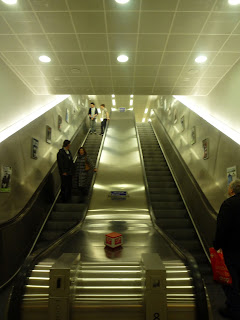 Head upstairs and you get the biggest improvement: a wide open ticket hall, with plenty of space and glass.  There's a blue funnel heading through it, which is just a ventilation duct, but has been covered in polished glass to give it a feature finish. 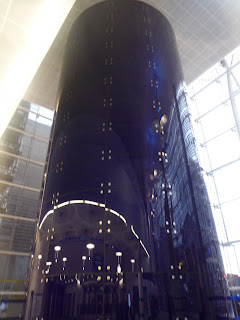 It's still not done with - integration with the main line station isn't complete (to be finished, as with seemingly everything else in the city, "in time for the Olympics").  I can't complain about what's there though. 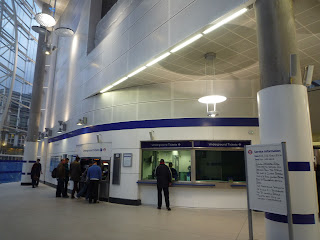 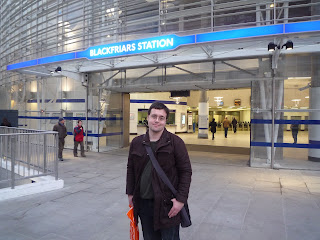 That lozenge round the station name is horrible.  It makes me violent just looking at it.  The Underground has a nice simple way of displaying its station signs - a long blue bar with the name at the centre.  Unfussy.  Uncomplicated.  That curvy edging to the "Blackfriars Station" reminds me of the old British Rail totems, which would be fine if this was a heritage mainline station, but it's not.  It's a brand new shiny Underground station.

I'm properly incensed by it.  I blame Boris. 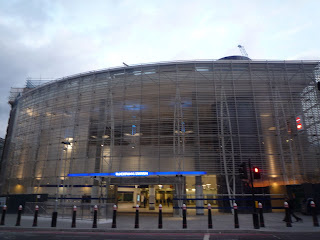 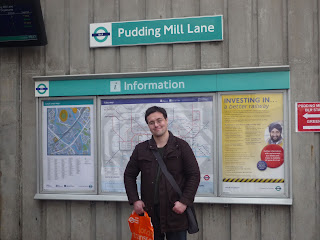 I can't get excited about DLR stations.  They are, let's be honest, posh bus shelters.  Just because they have rails and platforms it doesn't stop them from being unmanned, uninteresting lumps of concrete, just a few seats and a canopy.  However, we were out there to have a look at the Olympic Stadium from the View Tube so it was a case of "may as well".

Besides, it's not much longer for this world.  It'll be closed during the Olympics, because it won't be able to handle all the crowds, and then it'll be demolished completely so that Crossrail can surface here.  All around it are building works - either sporty or tunnelly.  So consider this a time capsule.  A remembrance of things soon to be past. 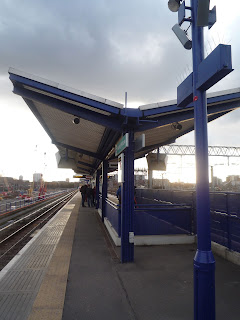 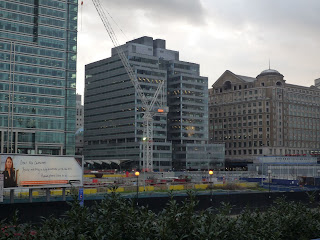 It's not the greatest photo in the world, but that crane is right in the centre of one of the biggest construction projects around.  Six floors of railway station - well, two floors of railway station, and four floors of shopping - all being built inside a drained dock (which will then be flooded again when they're done).  I wish they'd hurry up and finish it.  It's a project that makes me jump excitedly from one foot to the other.
Posted by Scott Willison at 12:05