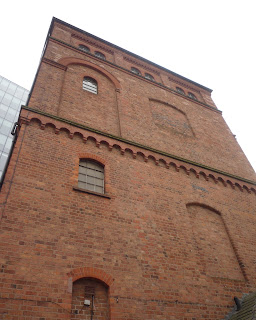 I was passing from the Museum of Liverpool to The Strand, past the giant black residential blocks that have been constructed on Mann Island.  As I approached the Victorian tower at the traffic lights, I wondered what kind of lease the owner of the San Francisco cabin must have.  He's managed to hang in there even as everything around him was destroyed, and I bet the posh restaurants headed for the canal basin aren't too happy about the Cornetto and chips stand being allowed to stay.

I rounded the corner and got an unexpected surprise.  There were engineers outside and they were doing something to the tower.

In case you didn't know, that Victorian tower is one of the original Mersey Railway pumping stations.  When the tunnel from Hamilton Square to James Street was constructed, there was obviously a great concern that water would leak in from the river and the docks.  Drainage tunnels were built into the design, and the water was then brought to the surface via two pumping stations on either side of the river.  The one at Shore Road, in Birkenhead, was until recently a tourist attraction until Wirral Council decided that providing public services like museums was just getting annoying.  The towers also doubled as ventilation shafts, for when the service under the river was operated by steam engines.

As befits its position right in the centre of Liverpool, this station was smaller in size, but is still a pleasing brick throwback among the gleaming glass and marble of the Pier Head.  Most people, strangely, look right past it; its efficiency and quiet practical design means it gets overlooked among its larger neighbours.

It doesn't look like a building that forms part of a 21st century railway, but the old pumping house is still working hard to keep the tunnel water free.  In fact, it's working even harder now, as the Link and Loop tunnels have added to its job description. 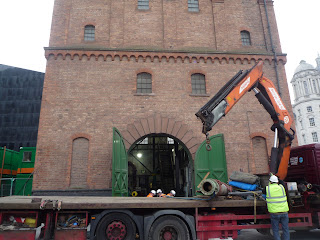 Seeing inside is a rare treat, so I loitered for a little bit while the workmen unloaded... things.  Using my extensive engineering knowledge, I can reveal that they had some sort of pipe thing, and took it into the building.

I was surprised by the interior.  From the outside it looks like a Victorian castle, but the interior seemed to have escaped from a 1950s bus garage - all whitewashed brick and Corporation green ironwork.  Clearly, the facade was the thing. 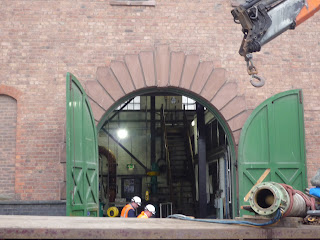 I realised the workers were looking at me funny, so I turned and left, with one final shot. 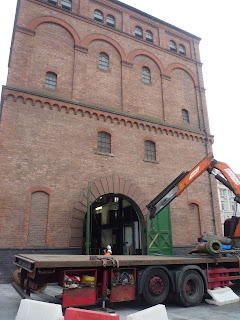 I've no idea what they were doing, but I'm sure it was extremely important and fascinating.  If anyone has a clue, please let me know.  It was a giddy thrill to see inside though, like getting a glimpse into a secret world.
Posted by Scott Willison at 11:49

It's almost a shame this is still a working building. It would have made a great restaurant alongside Mann Island!