Putting The Boot In

Where 007 goes, I follow. I have mentioned my status as a slavering James Bond fan boy before in passing. I can't help it. I just love James Bond - the films, the books, everything. To me, there is no better way to spend two hours than watching an arrogant self-centred man seduce beautiful women, drop sarcastic comments, and perform outrageous acts of deplorable murder for his country. Before blowing up an entire building. You get sex, violence and comedy; what more could you possibly want?

Unless you've just emerged from a comatose state, you'll be aware that the new Bond film, Quantum of Solace, hit the cinemas on October 31st. It's become a tradition that my friend Mike and I attend the first showing of a new Bond, going way back to 1997, when we were just students and so we could afford to waste a morning watching Tomorrow Never Dies (not that watching a Bond film is ever a waste of time). Now we're "grown up", it's become more difficult to organise - we have jobs, and responsibilities, and in Mike's case, even a child to enter the equation. But somehow we still manage to book a day off to go and watch various things explode (and here's my potted review, incidentally: AMAZING. Amazing in a different way to Casino Royale, but amazing nonetheless. Go see it. That wasn't a suggestion.)
I took advantage of this day off to book another one specifically for tarting purposes. My last few posts have been sadly devoid of me actually getting out and about (apart from the Chester Rant, and even that was accidental), so I thought it was about time I got out and filled in a hole on the map.
Out on the Northern Line were four stations which remained uncollected, mainly due to Merseyrail's improvement schemes. They've been rebuilding Bootle Oriel Road for well over a year, and so I left it off the list so I could witness it in its completed state.
But before all that, I had to get to Liverpool, and I went over to the city with The Bf first thing to try and get a Wirral Line station. I've avoided the city centre's four stations, by and large, ever since Mr D in one of the old posts suggested that I finish with all four of them in a grand victory loop. The idea really appealed to me, and I came up with an idle concept of a four way pub crawl (not so much a crawl as a mild skip) - alighting at each station, capturing it for posterity, then having a pint of Liverpool's own Cains beer in a nearby bar. Assuming Cains is still going when I finish. Moorfields, I know, was caught right at the start: but I still haven't done the Old Hall Street entrance, and besides, I can go there again just for the hell of it.
On top of this, James Street has had its main ticket hall rebuilt completely, and so I didn't want to go there until it was done. The early start did mean that I had the chance to capture an alternative entrance however: the one to Water Street, which is housed in the basement of the India Buildings. It's only open at peak times, so this seemed like the best way to get it - much to my asthmatic other half's discomfort. To get to the ticket hall, you have to negotiate this tunnel. 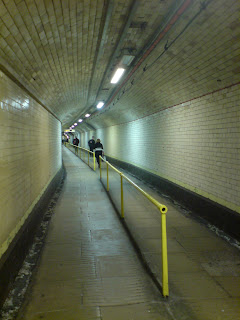 Doesn't look like much, does it? Think again. Cunningly hidden inside the tunnel are vast fans, which suck the oxygen out and leave you a pitiless, airless husk, gasping for breath. Ok, I may have lied about the fans, but there's something about this tunnel which makes it a challenge to even the fittest. It's something to do with the way it's angled - deceptively straight, but in reality a relentless uphill slog to get you to street level. The cunning gentle twist in its passage also disguises its length, so you think it's about to end, but no! There's still another 20 yards to go.
Gasping for breath, and with The Bf sucking in a frankly disturbing way on his Ventolin, we emerged into the ticket hall. Because it's just an auxilliary entrance, Merseyrail have pretty much ignored it - and thank God. There's a bit of 70s unpleasantness with the ticket window (which looked unmanned), and the Colour Tsars have been out again with the yellow and grey, but the rest is pure pleasure. 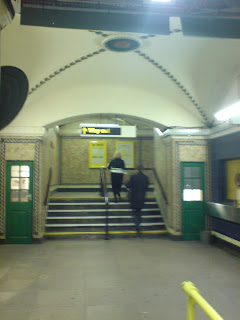 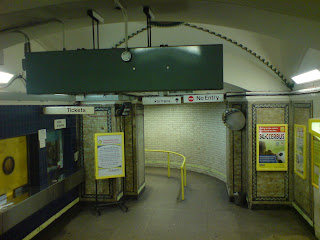 (Apologies for the blurring). Beautiful tiling, lovely ceiling details - just marvellous. I particularly liked the telephone booths: their symmetry, either side of the exit, 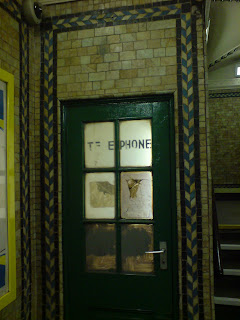 was of course a definite pleasure for me, but they also summoned up 30s glamour: flappers calling cabs after nights of scandalous indulgence, monocled businessmen making terribly important international calls, journalists with paper stuck in their bowlers calling in a scoop at the last moment. It's a shame it's been allowed to decay. I know no-one uses telephone booths any longer, but it could be scrubbed up a bit, an old two-part phone could be installed for show, and it could be discreetly lit. A little bit of charm to distract the commuters on their way to the offices - or would it be wasted on the head down scurriers who breezed past me and my camera, oblivious to everything?

Eventually we had to get on with things, so it was out onto the street to tart the entrance - though I was surprised to see there's no actual station sign outside. If you squint below, you can just about see the name on the map by my shoulder: 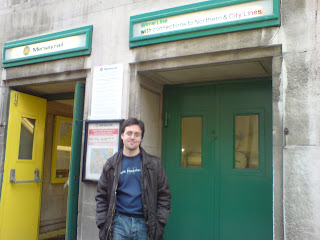 With the Bf off to work (ha!) I was left to my own devices, off to buy a Saveaway for my trip to Bootle. I considered stopping off at Sandhills, en route: it's been open since July. But one look at the mass of building work and scaffolding on the platform changed my mind. It was clearly a long way from completion, so I stayed on the train and carried on, through Bank Hall (where there were men on the platform looking befuddled at the art - what is it?!?!) and then off at Bootle Oriel Road. 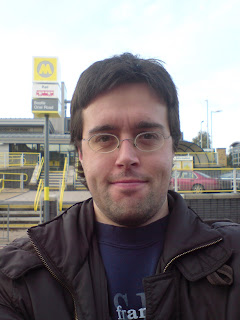 It looked like the work was still carrying on here, too. The only people who got off with me were a load of builders in hard hats, who met up on the platform with other builders in hard hats, to discuss whatever builders in hard hats talk about - cement, or something. Bits of the station were still encircled by that plastic mesh fence that is put out temporarily while the tarmac dries, and it felt bitty, somehow. I crossed over to the other side and got the obligitary "I WOZ ERE" shot outside, then took a look at what £4.25 million buys you in stations these days. 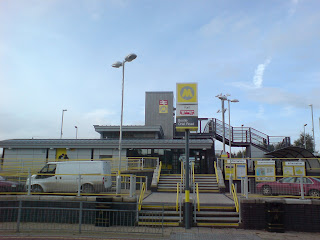 Let's be frank here: that's a mess. I feel disloyal for saying this, because I've ranted at length about money not being spent on stations, but that's all over the place. It's steps! It's ramps! It's lifts! I understand there's a Disability Discrimination Act to comply with, but this is ramshackle, and unfocused. There's no "wow!", which is a shame. After the mega "wow!" of James Street, this was retail park "will this do?" architecture. Is it asking to much for the station building to at least look permanent? It was a major disappointment, and genuinely dispiriting. It also made me pessimistic about the prospects for a good design at Sandhills.

Crashing on. Next stop is Bootle New Strand, so I hoiked myself onto the main road and headed north. It's years since I'd been to Bootle. Mike - my Bond sharing friend - once worked for the Inland Revenue here. They're housed in a building with the not at all terrifying name of The Triad. If you want to house a Government department, why not choose a building named after an international criminal gang? I'd come out here to have lunch with him in a Yates' at the Triad's foot (we're all class), and so I'd got a look round the infamous Strand shopping centre while I was at it. It was dispiriting to say the least. Grey, unpleasant shops, low end chain stores, covered vacant fronts: I haunted the artificially lit malls for a while before I burst out onto the street in search of a bit of sun and freedom. I believe it's been refurbished since then, expanded, re-energised, but I didn't fancy poking my head in to find out. The shopping centre turns its back on the road outside, presenting an ugly concrete face to the traffic, with the only colour being a grim looking pub squatting in the corner. It almost seems to resent Bootle, but in fairness, Bootle seems to resent it right back. 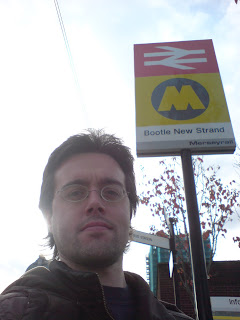 I don't want to sound down on Bootle. Before I got to the New Strand, I'd passed the new Health & Safety exec building: modern and vibrant and exciting. Opposite the shopping centre, there's a tall block of apartments under construction, and new shops, so it seems that there is money coming into the area. All I can say is that I was able to travel between the two stations in less than fifteen minutes, and I had no desire to linger.

Anyway, a bit of positive about Bootle New Strand: it was another rebuilt station, but for some reason this one seemed far more charming than the other one. 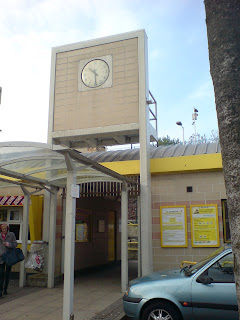 Perhaps it was the clock (though it could do with a clean), or perhaps it was the little newsagent by the entrance. An old lady hobbled up to it ahead of me to buy her Daily Post, which I found sweet. I wondered if she'd been doing that for decades, right back to when the station was called Marsh Lane & Strand Road in the 60s, before they built the shopping centre. There was meant to be a bridge, going directly from the station into the shops, but it was never built, and now you have to cross the busy road to get to the centre and the buses.

Another plus about Bootle New Strand was that it gave me the closest thing to an Attractive Local Feature board all day. OK, it's basically an advert, and it's only half the size of a proper one (a semi-ALF? A quasi-ALF?), and let's face it, it's not very pretty, but I'll take what I can get, quite frankly. 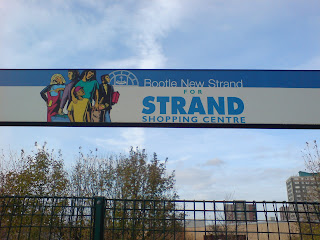 The next station was Seaforth & Litherland. All I know about this area is there was once a Sunday night tv drama on BBC1 called Seaforth: it starred Ken Barlow's son and it was the kind of thing that Grannies like, and I remember there being some sort of vague controversy when it was cancelled after one series because it had got loads of viewers but the BBC1 controller just thought it was shit. Perhaps, to commomorate this gone-before-its-time series, Seaforth & Litherland's ALF would be a picture of Linus Roache crying, or perhaps a pile of burnt TV licences. Or perhaps everyone else in the world has forgotten about this show, and Seaforth & Litherland would have its own charms to capture my attention. Who can say?

Oi don't I even get a side mention for attending said James Bond film. I am feeling very neglected!!!!

Maybe you was going to get mentioned in the second part. Anyway, were you there at Tomorrow Never Dies, eh? No.