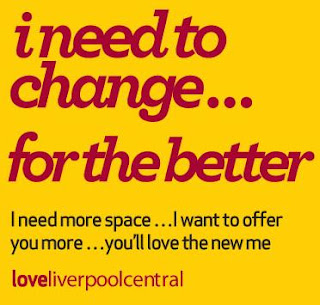 This is of course to promote the forthcoming closure of Liverpool Central, and to try and make sure people realise that their plans are going to have to change.  There's going to be thousands of passengers who are going to have to find somewhere else to alight come April.  Merseyrail have set up a new website, www.loveliverpoolcentral.com, in which the station talks us through the changes.  It's worth checking out for the pics of old Central alone (I love the shot of the station from 1975; it's like something from another world).  You can also e-mail in your memories of the station; did you, for example, meet your husband or wife there?  I'm guessing they won't be interested in the time I missed the last train home and had to wander round the city centre all night until it reopened at six on a Sunday morning.

To get round the closure, there will be a circular bus route in the City Centre, plus another connection from Central to Brunswick.  This is all more than I would have done - I'd have said, "get out and walk you lazy buggers", but that's yet another reason why I shouldn't be allowed to work with other human beings.

It's all nicely done, with a lovely purple and yellow colour scheme, but I'm not sure about making Liverpool Central into a "character".  It's friendlier, but it also makes the station sound a bit needy: a bit like a girlfriend who'll do anything to stay in a relationship - change her hair, her friends, her job JUST PLEASE DON'T LEAVE ME!  If you read loveliverpoolcentral too much you start to worry for her, in case she'll start self-harming to Joy Division records if you don't pay her any attention.

It did make me think of personalities for the other underground stations when they close (Merseyrail have registered lovemoorfields.com etc. already).  Lime Street is the slightly arrogant one with a superiority complex, just because he gets "proper" trains.  Moorfields is cool and aloof, the logical, efficient businessman.  James Street is a slightly dishevelled older person, the kind of nice academic lady who has crazy hair and lipstick on her teeth; loveable and a bit odd.  Hamilton Square is the outsider who desperately wants to be invited to party with the four popular kids across the water.

Actually, that's rather good.  Animate that with some claymation and you could have a rival to Underground Ernie.  It's all (c), (R) and (TM) me, but if anyone from CBeebies wants to get in touch, I'm more than willing to discuss terms...

Merseyrail stations as CBeebies personalities? This idea could run and run.

And just like the sinister periscopes that appear at the end Teletubbies, or the 10 minutes of people going to bed at the end of In the Night Garden, each episode could be brought to a close with the appearance of the evil repeating birds of Leasowe and Moreton.

They might not be interested in the story of you having to wander round Liverpool all night, but I am.