It started, as so much of my life seems to these days, with a tweet.

Though the London Transport Museum (and especially its shop) is a place of pilgrimage for me, I'd never been to the Acton Depot.  This is a storage area for the Museum where they keep exhibits they can't feature at Covent Garden.  It's only open for a half a dozen times a year, and it had never coincided with my schedule before.

This time, though, I decided to be spontaneous.  So The BF and I booked some tickets at the last minute, boarded a train to London at the crack of doom and were soon in the capital, ready for some historic transport fondling.  I should, at this point, thank The BF for his tolerance and willingness to wander round a depot.  He deserves a medal, and it almost makes up for all those Liverpool matches he makes me sit through. 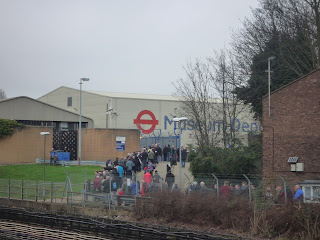 The Depot opened at eleven, and we got there about a quarter past.  Stepping out of Acton Town tube station was a shock.  The queue stretched from the road, up the hill and into the distance; it was like The Inn of the Sixth Happiness.  Fortunately, as we'd bought our tickets in advance, we could cut ahead to the front, but I still felt like breaking into a chorus of "This Old Man" as I reached the head. 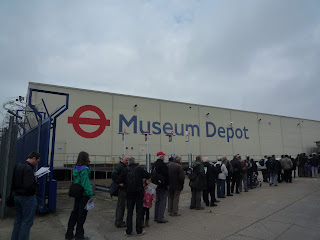 Inside was a sort of Ideal Home Exhibition, with trains.  It was packed full of people, objects and stalls. In addition to the Museum's regular collections, there were also model trains on display, plus family events and bus rides. 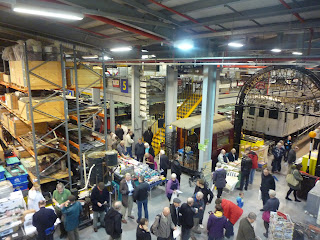 The Depot's a working space, so unlike the Covent Garden museum, most of the stock here was unlabelled.  Some had been furnished with a laminated luggage tag to give you a clue, but in most cases it was just left to the visitor to interpret what they were seeing.  Some of it was obvious: 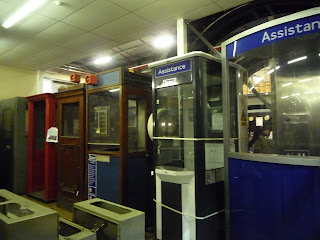 Some of it, less so: 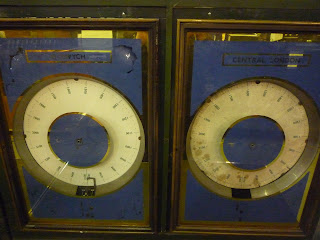 At the rear of the hall were the vehicles: buses, trams and trains.  They were in various states of repair.  Some were ready for exhibition, but there just wasn't anywhere for them to go; some were being rebuilt by dedicated professionals; others were barely recognisable as a train in the first place. 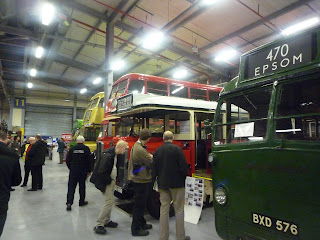 I passed the buses with a flicker of interest - because, you know, buses - and headed towards the railway displays.  Half a dozen trains, neatly lined up beside one another.  I recognised the recently retired Victoria Line train, still with its commemorative plaque on the front, and a rusty Waterloo & City train in Network SouthEast colours, but the rest came under the category of "trains.  Pretty".  I apologise to readers who were expecting a thorough analysis of the A Stock. 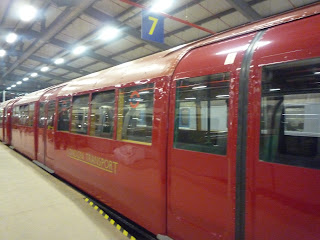 Can I be a bit rude now?  There were a lot of families at the Depot, a lot of casual visitors, a lot of people enjoying themselves.  But there was also a core of gentlemen who were socially underdeveloped.  I have not been pushed, shoved and just plain mistreated in a public place in my life.  I was elbowed out of the way so that men could get to their favourite displays.  Complete strangers stepped right in front of my raised camera so they could take their own shot.

Trainspotting is, I know, a solitary hobby, and so it's no surprise that these men (because they were all men) were a bit lacking in graces.  It didn't stop me from wanting to kick them firmly in the inspection pit.  This lady had the right idea.  Clearly she'd abandoned her husband, and found a quiet corner behind a double decker to read her book while he got on with it: 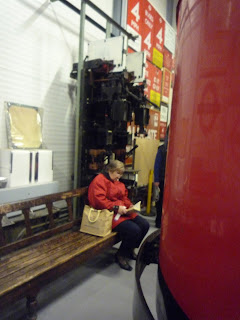 Pushing on, I carried on to the mezzanine level, with the collection of LT signs.  All in the beautiful Johnstone typeface, easily one of the most beautiful fonts ever made.  I made a valiant attempt to persuade The BF that our living room would look marvellous if we redecorated it with a wall of enamel roundels, but he wasn't convinced. 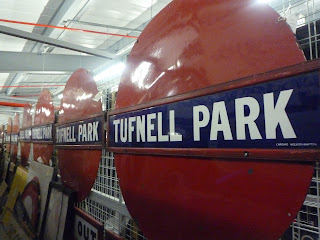 A display of diagrams, pulled from the walls of the stations, allowed you to trace the tiniest of change in the network - the hatched outline of the Victoria Line in the Sixties, Aldwych disappearing in the Nineties, the DLR exploding all over the right hand side of the map. 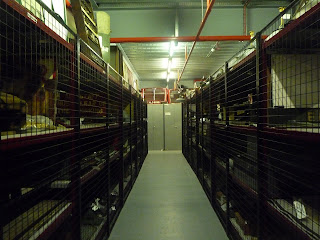 Below that was the small object storage.  With its rows of wire mesh cages, it looked like a low-budget zoo, only instead of monkeys and birds there were clocks, litter bins and lamps.  Strange lumps of metal were preserved here, for a very good reason I'm sure, but as far as I was concerned they just looked like they'd fallen off of a train somewhere and they were keeping it safe until they worked out what it was for. 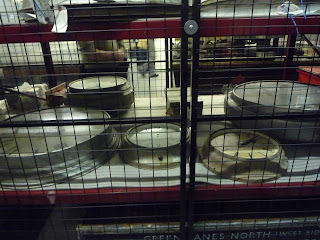 A field of architectural models proved to be a revelation.  You can stare at as many CGI representations as you like, but nothing compares with a 3-D visualisation.  A model of Oxford Circus, made for the arrival of the Victoria Line, showed a mess of interconnected tunnels that boggled the mind.  It's not just a tunnel for the trains, and one for the people; there are levels of transfers, interchange passageways, escalator banks, all reaching above and below one another.  It made you appreciate the problems of the current planners for, say, Crossrail, threading their new tunnels in between these sprawling spaghetti masses.  Next to that, the cold white simplicity of Canary Wharf - an awe-inspiring station in the flesh - seemed almost dull. 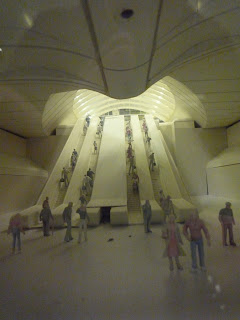 Not that I didn't want to reach in and have a play with those dinky model people.  Even more tempting to play with was a display by the Southern Lego Train Club, which featured a Lego Underground train.  If it had been driven by a tiny Russell Tovey and then blown up by SPECTRE it would have been the ultimate experience, and I could have died a content man there and then. 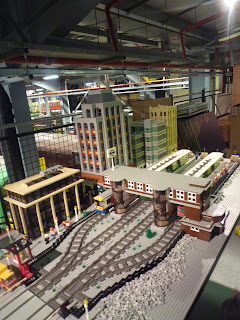 I spent a small fortune in the shop, and then we left.  There were still people queuing to get in, and to ride on the Routemaster outside; the staff were already looking a bit frazzled, but in great humour.  In an ideal world the Depot would be open all the time, or there would be the chance for more of the stock to be on permanent display for us to enjoy.  As it was, I was pleased to have seen just a tiny glimpse into their backroom.

Can someone arrange for all that Lego to be sent to my house now, please? 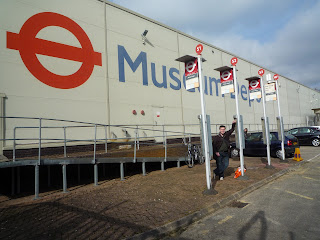 You can find the dates of forthcoming Depot open days here.
Posted by Scott Willison at 12:36