A Break In Service

A few weeks ago I walked the northern section of the Liverpool Overhead Railway.  It was time for me to walk the southern section.

Before that, though, I had a small diversion to make.  I passed the site of the LOR's James Street station and wandered down to the old Manchester Dock, now put to much better use as the home of the Museum of Liverpool.  I'd been here before - on opening day, as a matter of fact - but since then they've opened some more galleries, including one devoted entirely to the Overhead Railway. 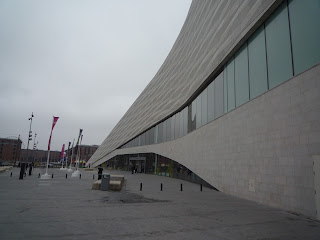 (Full confession: I was actually invited to a preview of the LOR gallery last year, the day before QEII came and opened it.  Unfortunately I managed to suffer a panic attack right outside, and I never made it through the door.)

The Museum's been a massive success since it opened.  It's bright, it's clever, it's popular.  I was there only about half an hour after it opened and it was busy even then.  I still can't quite shake off the feeling that its collection is a bit random and unfocused - the LOR gallery is next to one detailing the history of the local regiment and above the geological history of the city - but you can't say it isn't trying. 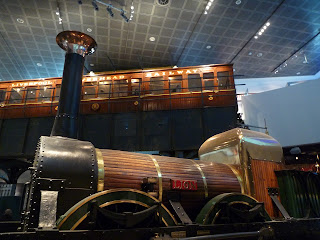 What you can't dislike about the museum is the extra display space it's given for the city's historic collection.  With the Lion, one of the earliest trains to run on the world's first passenger line, underneath the mounted LOR train, you get to appreciate them properly, and their detail.  I remember seeing the overhead train when it was exhibited in the basement of the museum on William Brown Street, years ago, and it was just another musty display object.  (Of course, back then, I was just an amateur in the ways of Merseyside transportation, instead of my current semi-pro status).

I wandered round the ground floor for a bit, involuntarily grinning when I found a portrait of William Huskisson (HUSKISSON!).  I thought I should at least pay them some attention before I headed upstairs.  After a suitably polite period of time, I dashed up the curly staircase to the Liverpool Overhead Railway gallery. 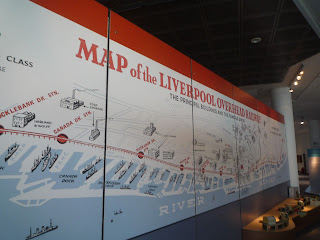 The gallery's aimed at people who had no idea the Overhead even existed, and goes into a great deal of detail about its history and route.  In addition to the long map seen above, there's an interactive model of the Liverpool coast.  Major buildings have been reconstructed at a tiny scale, and lights travelling along the elevated route simulate the trains.  I wanted to play with the miniscule buildings, but I suspect I would have been rugby tackled by one of the museum volunteers if I even groped towards it. 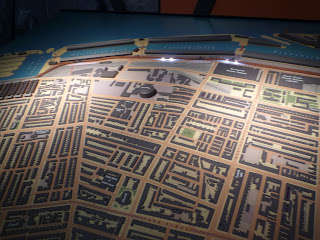 The theory is that you can listen to information about each of the stations by pushing a large shiny button and pressing a stick-receiver to your ear.  In reality, only one of the three banks of controls was working.  I listened for a little bit to info about the James Street station, then slipped the receiver back in its slot.  It clattered to the floor loudly.  Turns out the little hooks that held it in place had been snapped off; the only way you could get it to stay in one place was to balance it carefully, like a missing round from The Krypton Factor.  The receiver next to it was in even worse condition - it was held together by gaffer tape.  Considering the museum's not even a year old, that's a pretty poor show.

All this technological gimmickry was just gravy, of course; the main feature was the genuine, preserved train, mounted on a fake viaduct and open to explore.  The trains were wooden inside and out, with a very basic cabin for the driver to stand in and operate the train, and hard seats for the passengers.  There were quite a few people on the train already, recreating the old days; one elderly lady by the window seemed to have taken up residence.  I think in her head she was halfway to Seaforth. 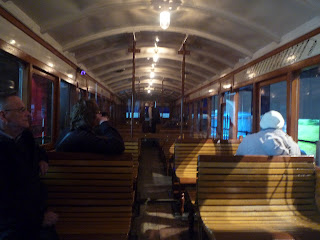 It was a lovely interior, with those elegant lamps and the warm wood around you, but I bet those seats became very uncomfortable very quickly.  Here in the museum it seemed pretty and charming.  In reality it would be cramped and uncomfortable, surrounded by filthy dockers swallowing industrial phlegm (it's hard not to notice the prominent "spitting prohibited" signs).

I stepped back out onto the fake platform.  The stations were all fairly basic wooden structures, though the one at Pier Head was completely enclosed.  The one at Seaforth Sands featured the world's first railway escalator, ten years before they appeared on the Tube.  The most famous and most unique station, however, was Dingle, which I'd be visiting later that day. 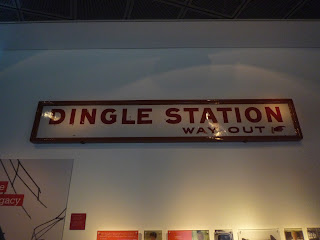 The final part of the exhibition details its demise, together with bits of memorabilia and reminiscences from the workers and users.  It's touching to see the regard the railway held, and the affection people still have for it.  I remembered the old trams and buses I'd seen in other museums - usually preserved for their historic significance, rather than for their memories.  Railways are different though.  Railways grab a piece of your soul.  No-one wants to see them die, and when they do pass, it's with sadness and regret. 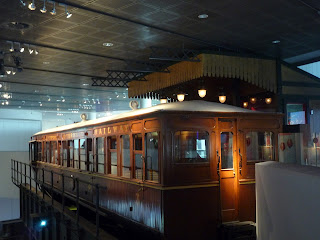