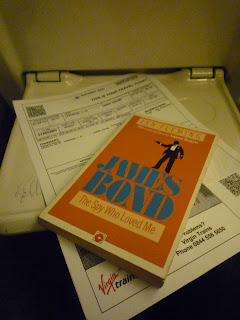 The passengers were almost as idle as the train.  I could see them through the window, settling in for a sleep, getting comfy.  Some were still recovering from the night before.  They had bottles of orange juice and water on the tables in front of them, or rested their head against the seat in front, hoping for a respite.  We settled into our seats, those plastic moulded curves in the standard class carriage, just as the Pendolino started its roll out of the platform.  The train manager comes on to announce our destination, putting on his PA voice, but still letting the Liverpudlian vowels come through.  "This is a Vair-gin Train..."

The only sign we had left the tunnels outside Lime Street was the sudden bold yellow glow of the Edge Hill ticket office.  Beside that, everything was black and impenetrable.  Where the stars should have been, there were bright squares of corporate signage - Matalan, Gala Bingo.  The crystal box of Wavertree Sports Centre glowed white.

The train seemed to be respectful of the hushed backyards of its neighbours, and crept through the city, not breaking into a rush.  I looked up from my book as we crossed the Runcorn bridge.  It was a glowing arc, each strut illuminated with a brilliant blue-white spotlight.  The cross-braces of the railway bridge made it flicker, giving a zoetrope effect, making it unreal.  A pause at the station then we're chasing south, whistling through the commuter stations.  We even glide through Crewe in our determined shift towards the Midlands.  Pink tendrils begin to creep over the fields.  The sun is the colour of a fondant fancy, a weirdly unreal shade that makes it look as though it should be smiling.  The ugly yellow brick of Crewe looks almost palatable in the soft focus dawn.

The BF dozed beside me while I work my way through The Spy Who Loved Me, one of the first Fleming novels I read, aged 10, and still one of my favourites.  It's a stock novel, a bit cheap, a bit stupid, a bit unoriginal.  Three men and a girl in a burning motel - just a quick and easy thrill - but it delivers.

I put the book down after Rugby.  Viv had finished regaling us with her incredibly 1950s lifestyle (I love how her and her dirt poor friend managed to scrape together enough money for a party: one with a dozen bottles of pink champagne and some foie gras).  Her life was about to be ruined by some gangsters, so I left her reasonably content and turned back to the view.

The sun was burning off the night's dew on the fields, creating a low warm mist that diffused the light.  It was a view that seemed so new and exciting; the beginning of anything.  A day with potential.

Viewed from a train window the villages were cold brick, terraces of white and red.  There was no life to warm them up at this time of the morning.  The houses turned their backs on us, showing us messy gardens and allotments and sheds.  Sometimes the pinnacle of a stone church would break the low horizon.

The promising mist slowly grew into a fog.  Only the nearest hillocks were visible; beyond that it was a sea of grey from the ground to the sky.  The bare trees formed dramatic silhouettes against the blank canvas.

Behind me were two women who hadn't stopped talking since Liverpool.  Clearly an early start wasn't a discouragement to them and their need to chatter.  It was conducted entirely in hushed tones, so all I could hear was the hiss of their sibilants and the occasional stressed passage.

On the other side of the aisle was an enthusiastic young gay boy.  That sounds presumptuous until you heard him speak, soft and happy and camp, and take in the carefully arranged grey cardigan and the moulded flick of the fringe.  He was with a woman who could only have been his mother.  I pictured the two of them planning their day's shopping in London together, giddily listing the shops they need to visit, the places to lunch.  She loves having a gay son, loves that no woman will ever take him away from her now, loves her pal who will tell her what suits her and gossip over skinny lattes.  She doesn't think of him as a sexual person, as a man; by telling her his sexuality he's somehow managed to infantilise himself.

In the distance, shadowed against the fog, the squat black figure of a motorcyclist traversed the hill.  It was a single moving point in the otherwise static landscape.  Looking out the window, watching it rolling past, I was reminded of those stage backdrops that are hand cranked to let characters go for a walk or a bike ride.  A single neverending piece of canvas unspooling beyond my window.

We stopped at Nuneaton.  The honeyed computer voice announced our arrival, followed immediately by the train manager saying exactly the same thing.  Either he was very Union, and objected to the automation of this process, or he's translating the message into Scouse for the passengers.

I wandered down to the shop for a bottle of water.  It's like a mobile tuck shop, lots of chocolate bars and crisps and Coke.  It's too early for the newspapers; your only choice of reading matter is two week's worth of Hello! magazine.  Both editions had Kate Middleton on the cover, beaming, single handedly saving the British publishing industry with her variety of interesting hats.  I grab a bottle, and the boy with tightly cropped hair and half-asleep eyes behind the counter looks at it suspiciously.  "You do know this is sparkling water, don't you?"

I didn't, but I wasn't bothered either way, so I said yes.  He looked relieved.  "I've started telling people.  They buy it then come back two minutes later, complaining."

Wondering about the mentality of someone who'd want their money back because their water was too fizzy, I headed back to my seat.  Having been woken once to let me past, the BF was asleep again.  He'd had his eyes closed for almost the whole trip, only occasionally jerking to life with a snort, followed immediately by a blush and a glance around to see if anyone noticed.

Milton Keynes was a mass of grey boxes.  Some were tall, some were low, all were huge, all were anonymous.  There's a brief flash of green as the station burns by and then we were back among the warehouses and industrial estates.  The railway lands opened up at Bletchley to reveal stabled London Midland trains, taking the weekend off from their early morning commutes, parked end to end in impossibly long chains.

Then a freight train appeared beside us, and for a while we were racing it, though in reality there was no competition.  The Pendolino slid past with ease, electric motors silently carrying us past the yellow and blue diesel engine.  I resisted the urge to give a conciliatory wave to the driver.

Leighton Buzzard station meant I was, however briefly, back in Bedfordshire, albeit a bit that used to be Buckinghamshire.  It occurred to me that trains don't pay any attention to where you are.  The journey between stations is simply "nowhere", to be passed through as quickly as possible.  Even a motorway points out county lines and the names of rivers as you pass.  Railways disregard any of that; they form linear counties of their own, with their own rules and worlds.  They even have their own police force.

The shop closed without announcement, long before it needed to, and the boy slumped into a nearby seat.  He was clearly repenting at leisure for the night before.  Behind me, the two women had suddenly fallen into silence.  I wondered if they'd finally run out of things to say.  They'd exhausted all conversational options, and would spend the rest of the day in an uncomfortable silence.  They'd get off the train at Lime Street and never see each other again.

At Watford Junction, the whole train seemed to yawn and stretch, knowing that it would soon be at Euston.  It moves out of the station lazily, like a Thomas the Tank Engine character who doesn't want his journey to end.  The grey skies stayed with us all the way to the capital - the North might be sparkling blue, but here there was a heavy lid above us.

Just beyond Harrow & Wealdstone I spotted my first Underground train, followed shortly by my first Overground train.  Suddenly I was excited, excited by the journey nearly being over, excited by the prospect of riding the Tube, excited by London.  The last few miles of track were an obstacle now, a way of delaying me, an impatience.  And then we were there, squirrelled away in the back of Euston station, buried in a concrete box.  The train slid to a halt and we began a day in the smoke.
Posted by Scott Willison at 16:26

Nice account. I just did that journey in reverse - 5.27 from Euston to Lime Street through unearthly mist, enlivened by a pot of 'just add water' porridge from tuck shop.

Have never known the London train to go through Leighton though, that would be a treat; spent lots of holidays there as a teen.

Surely every Pendelino carriage comes equipped with at least one person chomping noisily through burger and chips out of a paper bag, its greasy smell adding to the underlying stench of piss-soaked carpets.

Or perhaps that's just the ones from Birmingham? Presumably Liverpool trains don't have yam-yams whining into their mobiles for the entire journey as well.

Yay, one of *those* kinds of blog entries. Your writing is superb, sir.

And what the hell is a Yam-Yam?

Yam Yam, a person what lives in the Black Country