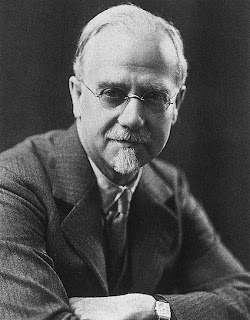 Charles Holden was an architect.  And, by the way, he was also a genius.  Holden was a man who embraced modernity and simplicity and applied it beautifully to the most everyday buildings.  He changed our perceptions of buildings and what they mean to us.

Holden was born in 1875 in Bolton, and took up draughting in his spare time.  He was an enthusiastic and innovative designer from an early age, and he was soon creating houses and hospitals.  His design for Bristol Central Library, an innovative conglomeration of a building that paid homage to the city's cathedral without being overawed. won him plaudits immediately, and is now Grade I listed.

After the First World War, Holden worked on many of the designs for Imperial War Graves across Europe and the UK, and the simple clean lines of the cemeteries informed his later architectural work.  He worked with them for a number of years, until Frank Pick called and asked him to work on designs for new Underground stations.

Pick commissioned Holden to design the new stations for the Northern Line extension to Morden.  Holden came up with a simple design which was varied slightly at each location: a double height ticket hall, faced in Portland stone, with plenty of natural light and the Underground logo throughout.  The designs still exist, practically untouched, today.  Holden also designed the magnificent headquarters for the London Underground at 55 Broadway, above St James's Park station, one of the best office buildings in London and the tallest until the Senate House in Russell Square (another Holden design) was constructed.

I was heading out in the opposite direction from Morden and St James's Park, into North London.  Holden and Pick had toured Europe in 1930 to see the new developments in modernist architecture across the continent, and they came back enthusiastic to bring this new style to the capital.  The extension of the Piccadilly Line to the north and west of the city gave them the perfect opportunity.  In 1932 Holden's first new building in this style, at Sudbury Town, was opened: a vast brick box containing all the passenger facilities. 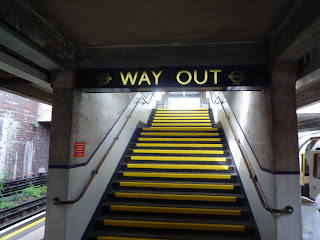 This was just a practice run for Holden's perfect station: Arnos Grove.  I stepped out of the modern Tube train into a magnificent piece of 1930s design.  You walk up from the platforms and into a brick drum rising high above you.  Great glass windows allow the sunlight to pour in, even on a grey day like when I visited; then, when it's dark, they allow the light inside to glow, a lantern to beckon passengers in. 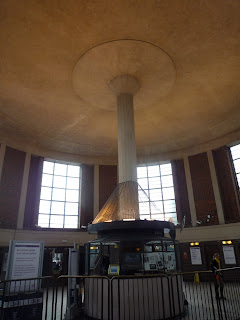 The passimeter in the centre - now unnecessary, thanks to the UTS gates - acts as a fulcrum to the building, a centrepiece to draw your eye.  You know exactly where to go to get to the trains instinctively, without needing signs.  Around the edge are the services you need - ticket windows, telephone kiosks.  It's magnificent.

I stopped gawping in awe long enough to go outside onto Bowes Road, just another north London high street which the Underground station has fallen into.  From the outside, it's even better. 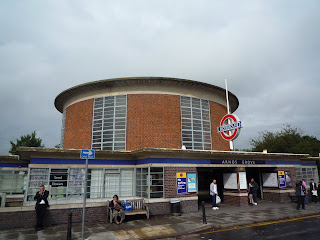 Again, note how Pick and Holden's principles of simplicity in design make the station so easy to use.  It's a beacon to passers by; it demands your attention.  Brick is the plainest, most British building material there is, and it becomes a virtue here.  Holden's abandoned the Portland stone because, ultimately, it's unnecessary when you can use bricks to such a beautiful effect.  And out front, skewered above the entrance, the glowing red and blue of the Underground bullseye. 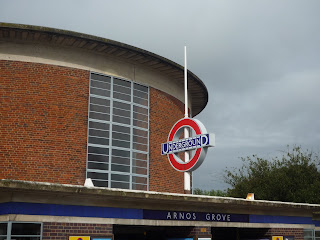 I went round to the side, to the car park; Arnos Grove was a pioneer of "park and ride".  The station looks just as great from every angle, carrying its stunning symmetry with grace and style. 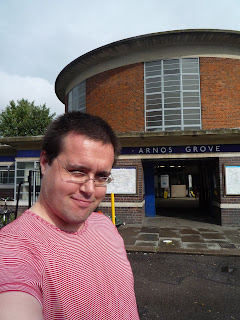 Back inside I took a moment to study the display in the passimeter about Holden, his life and his work. It's a small exhibit, but a lovely touch.  As I stood and took photos of the ticket hall, the Underground worker on the gates smiled benignly.  The staff on the Underground have got a bit of a reputation for pouncing on transport nerds with cameras, accusing them of being terrorists and threatening to report them to the police, but I guessed that I wasn't the first to want to photograph Arnos Grove.  On the contrary, I expect he was proud to work in such an iconic building, and glad it was being appreciated.  I know I would be. 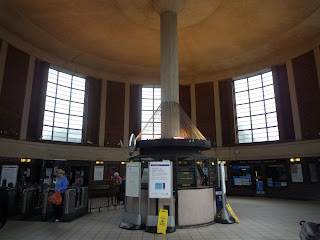 I headed back down to the platform.  Holden continued to design for the Underground, and his designs go all the way up to Cockfosters.  He also created buildings for the "Northern Heights" extensions, and for the Central Line expansion into East London.  But the Second World War came along and most of the extensions were called to a halt, then funds were less easy to come by in the austerity years.  He did complete the fantastic Gants Hill station, on the Central Line, which I visited a couple of years ago and which took inspiration from the Moscow Metro. 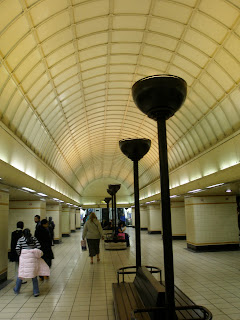 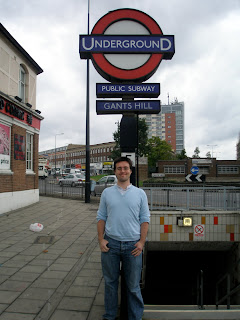 Holden died in 1960 but you can still find his influence across the whole London Underground.  New architects follow his principles of as much natural light as possible, wide open ticket halls and easy navigation; Buro Happold's Canada Water station on the Jubilee Line is a shameless 21st century version of Arnos Grove, and Ian Ritchie's Wood Lane carries much of the same ideas.  They're ideas that are bizarrely only now being adopted by other railway architects; Liverpool Central's planned rebirth with a glass roof and walls is the stuff Holden did as a matter of course eighty years ago.  He understood that railway stations, especially dark Underground stations, are hubs and need to be built big and proud; they need to glow and inspire.  Public transport becomes a much more pleasurable experience if you feel respected and wanted by the transport providers.

I took the Piccadilly Line down to the mammoth complex at King's Cross St Pancras, a station that's been undergoing building work for years.  Again, it's been opened up and made brighter, with new wide corridors and ticket halls.  Above ground there's a new customer facility being built - a huge glass dome that will let in natural light and accommodate all the shops and restaurants you could possibly want.  It's a fantastic building, and I can't wait to see it when it's finished. 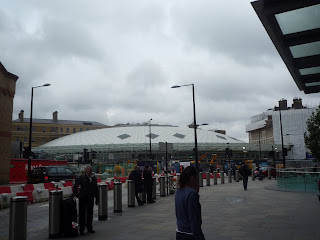 On a smaller scale, the Underground's Northern Ticket Hall, built for easy access to St Pancras domestic passengers, has a bright, unpretentious feel to it.  It would definitely register well with Charles Holden and Frank Pick. 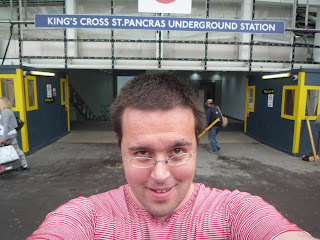 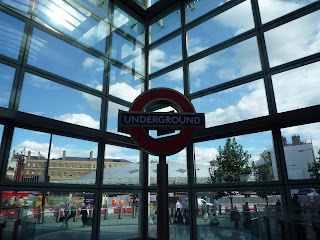 If you want to read more about Charles Holden, I recommend David Lawrence's book Bright Underground Spaces, which covers his brilliant knack for architecture in great detail, and includes Holden's actual designs.

Email ThisBlogThis!Share to TwitterShare to FacebookShare to Pinterest
Labels: going underground, London, MerseyTart on tour, something really rather wonderful

Spot on, about Holden and in particular about Arnos Grove. Imagine (and I have) the privilege of it being your local station, through which you got to pass twice every weekday.

Holden and Pick should be on every GCSE Humanities syllabus in the land.

Lovely stuff. I had no idea who Charles Holden and Frank Pick were, but now want to know more.