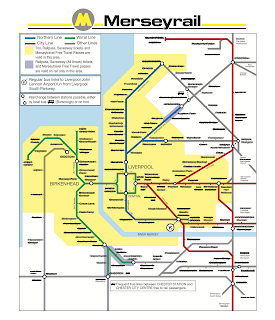 That's every station on the map crossed off.  Nearly five years worth of riding, walking, travelling all over the place have resulted in a map covered in black splodges.  I've gone everywhere.

All that's left is the loop.  Four stations in the centre.  I've never collected Liverpool Central.  I've done the Water Street ticket hall for James Street, but not the main entrance.  I've done Lime Street main line, but never the underground station.  And ok, I did Moorfields on my very first trip, but there's no harm in doing it again, is there?  Sort of bookends the whole thing.

One last trip round the loop will finish it off.  So here's when I'm going to do it: 2pm, Sunday the 15th April, before they close Liverpool Central for refurbishment.   And you, dear reader, are invited.  You don't have to come.  Don't feel obligated.  But after all these years it might be fun.

The plan is this:


It's not the most elegant of plans, and it's not going to take all afternoon.  I just thought it would be a good way to polish the whole thing off.

Things to remember:
As I say, if you want to come, please do.  2pm, Sunday the 15th April, outside James Street.  I'll wear my I Get Around By Merseyrail Underground badge so you know who to follow.  E-mail me at themerseytart@gmail.com if you've got any questions, requests, suggestions for pubs.  It could be fun.  It could be horribly embarrassing.  You won't know unless you come though, will you?
Posted by Scott Willison at 21:23

Email ThisBlogThis!Share to TwitterShare to FacebookShare to Pinterest
Labels: Map, The Long Goodbye

ARGH! I so would have come to this if I was back home!

Congratulations on completing the map but please for the love of god don't end this blog!

Same comments here Scott. It's been a pleaure following/reading your blog.
I live overseas and a return to the UK is not possible before the Autumn,
otherwise I'd be there !

So it's basically just going to be me and a hat?

Hi Scott, If I can make it, I will. I'ts a shame these are the last stations, but having said that the intention was to cover the whole system :-) I am off on leave the following week, going to London, and could do with some advice on the best Holden designed Stations, as I'm really into photography, and would like to check them out (I'm thinking East Finchley and the stone Archers:

so be cool to catch up , and a pint after too. I'll let you know nearer the time if I can make it, but hope to be there :-)