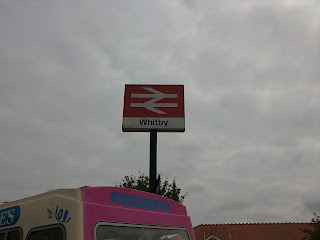 I went to Whitby over the weekend.  It was my friend Mike's birthday, so we joined him and his wife and his gorgeous little girls for an afternoon by the sea.

Obviously I didn't take the train.  If you want to go from North to South in Britain, it's simple.  If you want to go West to East, you may as well strap a rucksack on your back and hike your way over the Pennines.  The Bf and I drove instead, braving the 25% inclines in the North York Moors National Park to get to Whitby in the middle of the afternoon.

The original plan was that we would spend the whole day over there, travelling on the North York Moors Railway from Pickering to Whitby.  However, Jennie and her husband Jim, who were also coming, pointed out that getting there for a 9:30 train would mean leaving home at about 5:30... and we're all lazy.  Though to be honest, I was willing to give it a try, just because I wanted to have a go on the trains.  Common sense (and everyone else's whinging) prevailed in the end though. 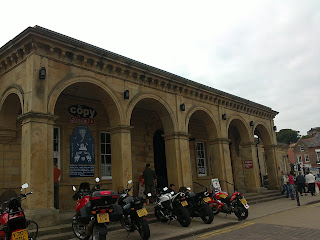 I did have a poke round Whitby station while I was there though; old habits die hard.  It's a lovely building, right in the centre of town with the fishing boats within sight.  There was some kind of motorcycle gathering going on, which meant it was surrounded by large men with moustaches in leather.  Quite disconcerting.  I headed up into the classical-inspired cloisters.  It's the side of the building, and yet, at the same time, it's the entrance; the station has two fronts, both of which are well designed. 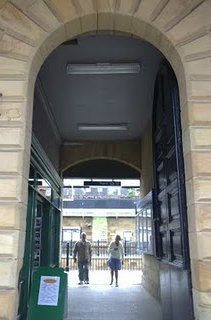 Inside was disappointing though.  Obviously, the station's seen better days.  There's only one platform still in use, which is bad enough, but in such a grand terminus, it looks even more inadequate.  There's an awful lot of bland chippings filling in the spaces.  I'm pleased they've maintained the glass roof though. 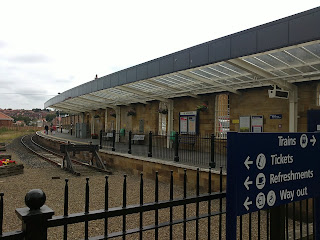 There's also a nice tiled map of the North-East on the wall, which acts as an interesting counterpoint to the Lancashire & Yorkshire map at Manchester Victoria.  It adds to the feeling that the station has been nicely preserved.  I wonder if it would be as pleasant if there wasn't heritage services using it as well as the Northern Rail ones? 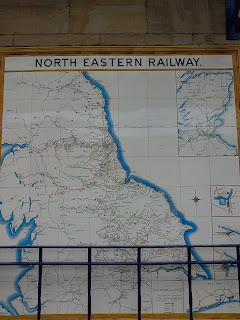 Another arcade takes you out to the front of the station, which gives you a low key, grand entrance to the place.  It really is a lovely little station, and is the kind of thing I wish all small towns had: well built, distinguished and elegant.  And the clock works too. 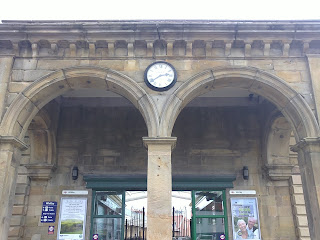 Liverpool-Scarborough every hour, with a short road connection to Whitby - train is possible!

Less economical with four of you though, of course.

"ROAD CONNECTION"?!?! Wash your mouth out with soap.

The room was once an overall glass roof, later cut back to the awnings. Originally there were 4 platforms; the two main ones and two bays, down to the left as you enter through the portico. Now swallowed by the supermarket, as was the rather splendid signalbox. As late as the early 80's, Whitby was manned, with a booking office where the poster shop now is and three of the platforms were still used, together with an impressive array of semaphore signals. Now its unmanned with token working of what is essentially a long siding from Middlesbrough (goes off to cry nostalgically)