Another day, another Merseyrail freebie from Jamie and Chris.  This time it comes in the form of a new idea for the younger travellers on the network.

I didn't realise this but under fives don't have to pay for travel on the trains.  That makes me sound a bit thick, but when am I ever going to have found this out?  I don't carry infants around with me.  Anyway, the point is that adorable toddlers don't get given tickets, which can cause them to get distressed.  Who knew this was a problem?  Who knew that all over Merseyside there were blubbing four year olds, distraught because they couldn't wave a bit of orange card about?  (Mind you, I remember having a roll of blank bus tickets from my Granddad, who was a driver on the Green Line in Hertford, and loving playing with them.  Simple pleasures, etc).

Anyway Martin at Moreton station came up with this idea: 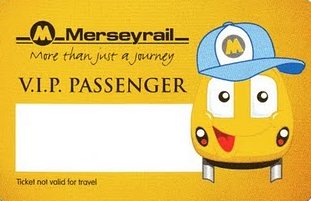 A ticket sized card for those kids to hold and play with on the train.  It's a lovely, simple gimmick which has been rolled out across Merseyrail, and I thoroughly approve.  Not least because after an absence of about thirty years, it sees the return of the smily Merseyrail train:

He's gone all﻿ trendy with that baseball cap, and obviously he's had some work done, but still: nice to see him back.  Well done Martin.

It also raises an interesting thought for me - why are kids so fascinated with trains?  I've often seen very young children waving enthusiastically at them as they pass, or bouncing around on the platform with glee as they come in.  I was once in a lift at James Street with a gorgeous little boy who was telling his granddad all about the trip and how exciting it was.  There's something strangely primeval about it - it's not just to do with Thomas the Tank Engine and Underground Ernie, but something to do with the whole experience of the train.  I don't think they'd get half as interested in a passing Ford Escort.
Posted by Scott Willison at 17:25

I rececntly took the train across Albania, and for the whole six-hour journey it never stopped to amaze me how many children would run up and wave, Railway Children-style at the train as it passed (there's only one a day in each direction...). I must have made their day waving back.

the idea came from a Disney holiday. Over in the U.S, they seem happy to entertain children. Why dont we do it over here? Im a father of two, and they love the idea :)

Kudos again Martin! I love little ideas like this - things that are so simple but make people happy. Also, on a personal level, it's nice to have quiet children on a train ;-)