Back when I started doing this blog - gulp; four years ago - I had two aims.  Visit every Merseyrail station, and take a picture of all the ALFs.  These are the Attractive Local Feature boards that are on some of the platforms.  I still don't know what they're called officially.

They're a lovely little quirk of the Merseyrail network - picture boards guiding you to local highlights.  My local station, Birkenhead Park, has two, which I'm ridiculously proud of. 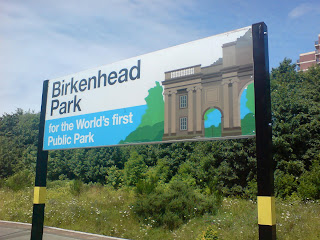 In recent times, however, the ALF seems to have come under threat.  Southport abandoned its ALF in favour of a drab tourist board, meaning I never got a chance to photograph it.  Birkenhead Central lost its Soccerbus service to Tranmere, and so the ALF went too.  I'd hoped it would get a replacement - something plugging the town centre - but nothing came.  It means that, oddly, Earlestown has a better promoted shopping centre than Birkenhead, because it has an ALF.

I was overjoyed when I discovered that Ellesmere Port was finally getting not one, but two ALFs, thanks to e-mails from Sally the Nice Lady at Cheshire West & Chester, and from Mike at Merseytravel.  A reversal of fortune like that called for a visit, so I got Robert to join me on a Sunday trip to the end of the Wirral Line.

I first visited Ellesmere Port back in 2008, and I was scathing.  I'm glad to say that there's been a turnaround in its fortunes, thanks largely to Cheshire West and Chester (and of course, Sally) taking an active interest in the station. 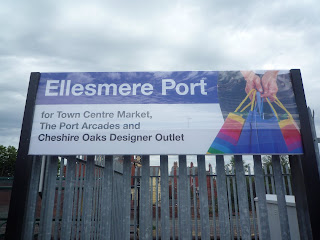 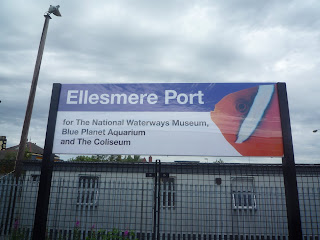 That is, indeed, a fish.  Makes a change from the usual slightly sinister birds.  It's interesting to note that these ALFs are laser printed photographs, rather than the usual illustrations.  It gives it a different look.  I'm hopeful that this makes the process of creating the ALF easier, as now you can put a stock photo on rather than having to commission someone to paint a picture of a faceless rugby player.

There's a large dwell time between the train arriving at Ellesmere Port and leaving again - about ten minutes - so the whole time I was larking around on the platform, I was being watched by a bemused guard.  I tried to put this out of my head as I carried on cooing over the station improvements.  It's been repainted (in the mandatory Colour Tsar shades, of course) and it's got one of those fantastic information pods which appeared on the unmanned stations: 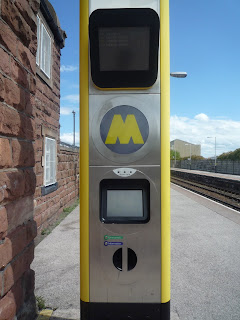 I'd much prefer there to be a manned ticket office, of course, but if that's not going to happen, a touch screen activated robot sentinel will do fine.  I had a bit of a poke around on it, playing with the tourist info and the map options.  Am I alone in still finding touch screens thrillingly futuristic?  I know in this era of iPhones and iPads everyone has one in their pocket, but I still get a little thrill every time I dab away at one.  Perhaps I just watched too much Star Trek: The Next Generation growing up, and I need to get over my secret wish to be Geordi LaForge (*cough* Beverly Crusher *cough*).

Anyway, Robert and I stomped up the steps to the footbridge where - praise Zod - they've finally put in a station sign.  When I visited before I had to squat under a platform sign, which just isn't on.  Now they've got the full Merseyrail box experience: 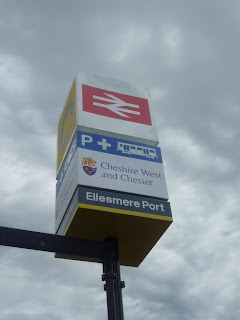 Alright, I'm going to have to be picky: I hate that CW&C have got their logo on there.  I know they probably paid for the thing, so they want some promotional value, and Ellesmere Port is on their patch - I just hate the way it muscles in.  At least we still have the Merseyrail "M" up there though.  To celebrate the appearance of the sign, I got a photo of me beneath it: 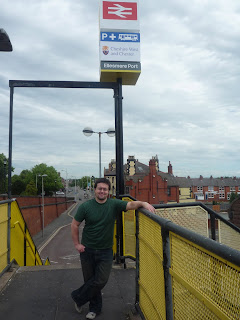 Yes, it is an interesting shirt, isn't it?

By now, the guard had called out the train driver to have a look at Robert and I fannying around with a camera.  We made the executive decision not to get on the train back, in case we got interrogated by the guard as he checked our tickets.

Besides, we had to look at the flowers.  Flowers!  At Ellesmere Port!  Ok, there was a beer can in amongst them, but combined with the pots on the platform, it was certainly an improvement.  Sally has entered the station for North West in Bloom and I think it deserves an award just for its step up. 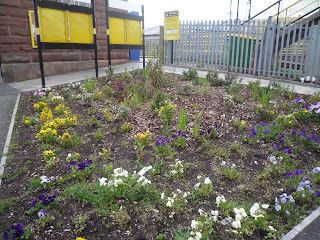 There was more good news at the ticket office itself: the comedy Tickets sign, with its falling 's', had been replaced by a more sturdy version.  One of the poster boards outside had also been used for a photo montage of Ellesmere Port station's history - a lovely touch, and yet another reason thank Sally, Merseyrail, and everyone in between. 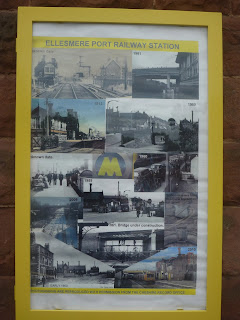 Robert and I headed into town for a coffee in the Port Arcades.  It's great to return to a place you had disliked and find it's improved a hundredfold.  The station isn't ever going to be up there with St Pancras as a wonder of railway architecture.  It's pushed to one side, the bridge over the tracks dominating the scene, and it's surrounded by industry and grime.  What it can do, and what a lot of Merseyrail stations do well, is act as a transport focus and a showpiece.  As the ALFs show, there's a lot going on round Ellesmere Port, and it would be great if the station's regeneration was symbolic of the town itself looking up.  Perhaps there'll be posters advertising four trains an hour on this route soon; perhaps, one day, we'll get that extension to Helsby.  I'm not holding my breath, but the works here show that tiny steps are always possible.
Posted by Scott Willison at 14:28

Using your many contacts within Merseyrail, have you ever found out why the Colour Tsars chose two such horrible colours?

You think they're horrible? I think yellow and grey is quite classy. Admittedly once you get a lot of yellow in one place is starts to get a bit relentless.

Interestingly I just read Eleven Minutes Late by Matthew Engel where he suggests that Merseyrail went with yellow because they couldn't pick red or blue and risk alienating half their passengers...

Ah yes. The silly belief that Scouses are so dumb & neanderthal that red & blue must never be used. That's why we have purple bins. Merseytravel's colours were green & green, which I preferred, to be honest.

The yellow is overdone and can look tacky. The main colour should be silver. Also, I'd prefer a bit more of a tangerine yellow rather than a crayon yellow.

It's all down to personal taste, I suppose.

*That should read, Merseytravel's colours were green and cream, not green and green.

Tangerine would be rather close to orange - there could be issues.

I'm wondering if it's all a subtle tribute to John Major.

Personally I'd paint it all in magnolia, and be done with it.

I'd agree with you Gareth except The Bf - a Liverpool season ticket holder - thought picking yellow for that reason seemed like a totally reasonable thing to do. Of course, he is a bit mad.

The green and cream is nice enough but it seems very old fashioned to me - I love green as a colour but the shade used is very Edwardian in feel. I think the yellow also works for things like the bus stops and bus stations, beyond just the Merseyrail infrastructure: the glass and yellow steel bus stops are very distinctive.

Personally if it were up to me I'd restore ALL the stations to their original colour and keep the yellow to a minimum. Somewhere like Green Lane or Birkenhead Central would look so much better if it were repainted in its Victorian colours.