She was walking a ferret.  I say walking; the slippery marble floor of Lime Street meant the ferret couldn't get any purchase with its claws, so it was basically being dragged across the concourse by its lead.  Its owner seemed unmoved by its writhing and yanked it onwards, while her husband offered it support - "Good lad.  Come on lad."

I have to say it's not the usual way to start your day - watching a rodent being propelled across a train station.  Given that it was barely seven a.m., I wondered if perhaps I was still asleep.  I hadn't been to Lime Street at this time for years, not since I gave up work.  Part of me almost went to the London Midland train to Birmingham out of habit.  Instead, I went to platform 8 and got on board a TransPennine Express service to Scarborough.

The purpose of today's trip out was to visit some of the least popular train stations in Britain.  It wasn't my idea.  Robert, long-standing friend of this blog, has come up with a plan.  He has a list of those obscure, barely serviced stations, and he wants to see them all.  These are stations that are only grudgingly visited by the train companies, because they have to.  Basically, they're the railway equivalent of that unpleasant aunt you only see at Christmas because she might leave you something when she finally pops off.

As you may have guessed, I'm a sucker for a pointless train themed project, so I asked him if I could tag along.  I hadn't realised at the time that it would involve rising at dawn.

Robert joined me at Liverpool South Parkway, along with about four thousand other people.  I think the days of LSP being a white elephant are long behind us - there were more passengers boarding than at Lime Street.  It only got worse as we got closer and closer to Manchester, with the people getting on at Birchwood having to force themselves into intimate situations with complete strangers to find room. 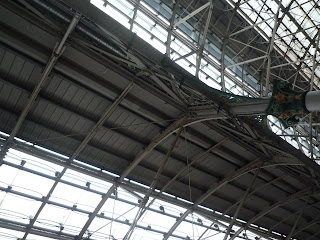 We finally got off at Manchester Piccadilly.  I say "we got off"; the doors opened and the sheer pressure of bodies ejected half the train out onto the platform.  I like Piccadilly.  It's a station of epic proportions.  Platforms in double figures, travelators, exits all over the place.  Lime Street's a lovely station but because it's a terminus, it's a bit underfed.  Piccadilly feels like all good railway stations should - it's an exciting, vibrant, crazy place.

Now it was time to get - yikes - a bus.  Robert's plan was for us to go between two stations, out in the Manchester suburbs, so we needed to get there without using a train.  I was disappointed, I can't pretend otherwise.  Not least because it turned out to be one Brian (spit) Souter's Stagecoach buses.  Still, it was clean, it was punctual, it wasn't full.  Shame it was a homophobe-mobile, really.

We were heading for Reddish South, a little halt next to a Morrisons in south east Manchester, and reportedly the quietest train station in Britain.  This is a station on a section of line between Stockport and Stalybridge, and which receives only a perfunctory service.  One train, once a week, in one direction.  That's your lot.  You'd best like where you're going because you're not coming back. 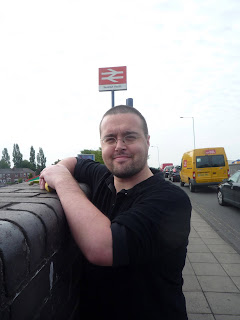 It's a Parliamentary service, existing only so that the rail companies don't have to go to the bother of getting the Government to close it.  It certainly feels like an unwanted, unloved bastard child of Northern Rail.  There was a quite unnecessary poster on the gate leading down to the station, warning you not to steal anything: 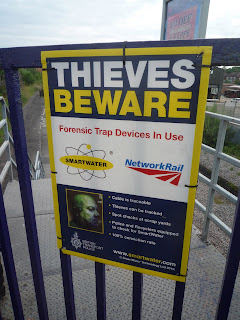 Unneccesary, because there was nothing to steal. 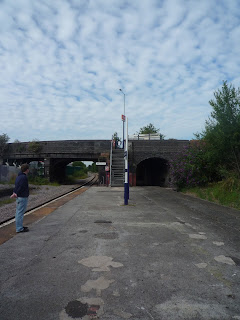 It's a single island platform with a railway line on one side only.  No station building, no seats, nothing.  Even the steps down from the road bridge look like they were shipped in from somewhere else and added afterwards.  Above us, traffic honked and squealed on the road, but down here it was silent and empty.  Strangely, Northern Rail had still seen fit to paint the information boards in its corporate purple.  I presume they had some left over from one of the proper stations.

When the train came, it was surprisingly busy for a such an obscure route.  We soon realised it was full of train geeks like us, who craned out the doors and windows to take pics of Reddish South.  It meant the train had a strangely joyful, happy vibe to it - you could feel the excitement of the men on board (and yes, it was mainly men; the women on board had the glazed look of a wife who didn't remember signing up for this on her wedding day).

Our ticket was £2.70.  "Blimey, that's expensive, isn't it?" said the conductor.  What are you meant to say to that?  "Yes, it bloody is.  I demand you charge me something more reasonable."  Or maybe launch into a tirade about the privatised railways.  We didn't do this, of course; we just smiled and handed him our money.

I was particularly excited about the next station.  I cued up its title song on my iPod:


I love Shock Treatment, which this song is taken from.  I think in many ways it's better than its predecessor, The Rocky Horror Picture Show; it's certainly got a better soundtrack.  Shock Treatment and Little Black Dress are ridiculously fun, and Bitchin' in the Kitchen is one of my favourite duets.

So the idea of finally visiting Denton was a quite weird little thrill for me.  Robert, it turns out, has never seen Shock Treatment, so he had no idea what I was on about.  He did tell me that Denton is where snore-worthy David Jason vehicle A Touch of Frost is set.  Not quite the same thing.  Does A Touch of Frost feature Ruby Wax and Charles "Blofeld" Gray singing about people who "do it for the money"?  No, it does not.  Shame.

Unsurprisingly we were the only people to get off, but surprisingly, someone was getting on: a bearded man with a "real ale" t-shirt on.  (Stalybridge Buffet Bar, at the end of the line, is a CAMRA approved mecca).  "Welcome to Denton!" he exclaimed cheerily as we got off.  "The station sign is over there."  Clearly, we weren't the first trainspottery geeks to claim this outpost.  I was pleased to find that "happy hearts and smiling faces" really could be found in Denton. 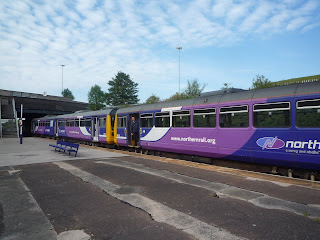 Much like its predecessor, Denton isn't going to win any Best Kept Station awards.  Another cracked concrete platform, another road bridge, though at least there was a bench here.  There would have to be - if you missed your train, you'd have to wait a week for the next one.  Robert was gleeful at finally reaching Denton: 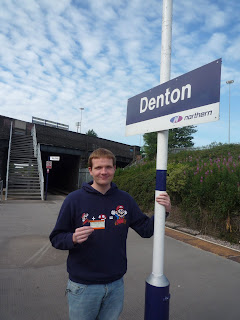 though not as much as me: 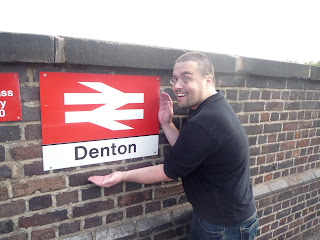 There wasn't much to keep us hanging around.  A board outside had been claimed by the Friends of Denton Station, which seems like a thankless job.  Bless them.  They'd put up some old black and white photos of the station when it was actually being used regularly, and a couple of campaigning posters, including one that said Our children will lead the future.  Give them a good train service!  It's the lyric Whitney Houston forgot to write. 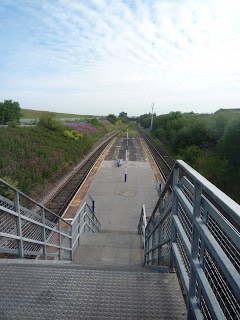 We headed under the M67, hoping to find a rambling rose and a picket fence.  Instead we encountered a big Sainsbury's and an industrial estate.  There was a trendy looking teenager wearing a pair of low-slung jeans that showed off his Cookie Monster underwear.  I don't understand (a) why you'd want to walk around with your trousers hitched around your upper thigh and (b) why you wouldn't wear a decent pair of boxers if you was going to flash them on a regular basis.  Invest in some AussieBums!  Of course, that's probably why I'm 34 and he's not. We did come across a fairly pretty church, but since it was next to the motorway, it'll never be on a postcard.  We decided to call it a day on Denton.  There was a bus stop that could take us back to Manchester, and besides, the hot sun was beating down on us: my enormous Tefal head and Robert's pasty ginger skin were starting to gently fry.

The bus journey into town also disproved another of Denton, USA's lyrics: Denton girls are not full of beauty.  Judging by the two on the top deck behind us, they are in fact fat slags who have no problem with discussing their boyfriends in loud, profanity filled voices.  I feel like Richard O'Brien has lied to me somehow.

P.S.  You can read Robert's write up of the trip at http://thestationmaster.wordpress.com/.  Just remember: my account is the definitive one...
Posted by Scott Willison at 18:45

I'm so excited that you went to Denton! I need to plan a trip there too :D

I've got an unloved train station for you - Norton Bridge (near Stafford). I think it's technically still open, despite the fact that you can't get to either of the platforms since they removed the footbridge.

If yours is the definite article, does that make Robert's the indefinite article? Rather than take sides in this blog duel, I'll defer to the words of Young Mr Grace and simply say you've all done very well.

Both stations look like great places to commit murder. I'll take a note of their locations. THANKS!

No, if you want a station to commit murder, wait and see the next place we visited.

Robert and I were actually talking about Norton Bridge - it's on his list!

Mine is definitive. Robert's is theoretical. I reserve the right to steal any of his jokes and make them my own.

He looks kind of cute, wearing that top.

I think I need to visit a Psy.......if I start finding 'trainspotters' cute !