Liverpool got a new tourist attraction on Tuesday: the Museum of Liverpool.  You probably noticed, thanks to the blanket media coverage.  (Unless you're my mum, who had no idea.  Bless her - she's in a world of her own).

I wouldn't normally go to this sort of thing on the first day - I prefer to wait until the crowds have died down.  However, I managed to wangle a couple of "golden tickets", which meant I could get in for a Breakfast Preview before the place was opened to the plebs members of the public, so the Bf and I headed over there for the 8:30 opening. 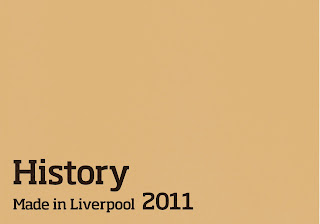 First point: that "golden ticket", seen above, wasn't as exclusive as I'd been lead to believe.  There was a queue to get in.  Let's be honest, if it was that exclusive, I'd have never got an invite, but still.  The attendees seemed to be a mix of social worthies, bloggers, and school kids. 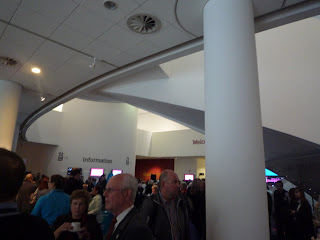 We slid inside and found a corner to hide in while waitresses served up granola bars and mini sausage sandwiches to the guests.  It gave us plenty of time to admire the epic sweep of the entrance hall, with its massive staircase threading up through the centre of the building.  It's a brilliant space.  The staircase circles up to a clear glass skylight, which casts its light right down through the void.

We were soon greeted by the Chairman of the National Museums Liverpool, Doctor Sir Lord Phil Redmond CBE MBE DPhil and Bar (I may have made some of those qualifications up), who was giving a speech.  I have a love hate relationship with Redmond.  On the one hand, he created Grange Hill and Brookside; on the other hand, he drove Grange Hill and Brookside into the ground and then blamed everyone else for their failure.  Finally we were unleashed on the museum itself, and the Bf and I staggered up the stairs to the top floor (it's a lot taller than it looks). 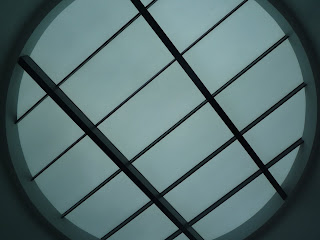 There was something familiar about that skylight, but I couldn't put my finger on it. 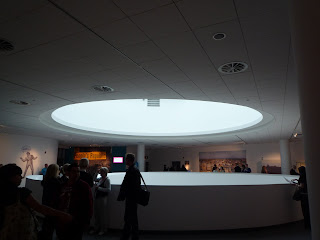 We headed into The People's Republic, a sort of social history of Liverpool through the eyes of its residents. It's really good.  Yup, that's the kind of insightful reviewing you'll get from me; we can't all be Mark Lawson (who was also wandering around, incidentally, with a producer in tow).  Liverpool's history is Britain's history, and by covering the city's experiences it managed to bring a fascinating and personal story to life. 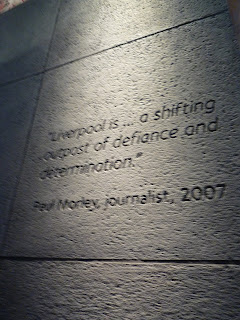 The highlight for me was the huge, astonishing model of Lutyen's original design for the Catholic Cathedral.  I'd seen it once before, on display in the Walker Gallery, but here it seemed to be so much more massive, a colossal bulk of wood soaring above us.  The Second World War stopped anything more than the crypt being built, and though it would be impressive on Mount Pleasant, I prefer the Metropolitan Cathedral's design.  I can't help thinking that if they'd started building Lutyen's design it still wouldn't be finished today - the Cathedrals are already an anachronism in the secular 21st Century.  Raising the funds to polish off this beast of a building would have been impossible. 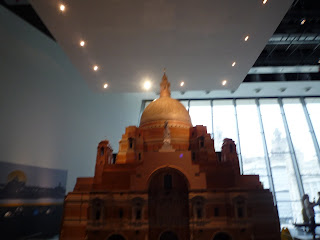 Then, of course, there's that window, giving you a postcard view of the Pier Head.  Unfortunately it was grey and miserable that day - on a sunny afternoon it will be stunning. 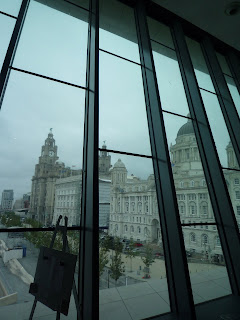 Across the landing was a gallery devoted to the culture of Liverpool.  You know what that means: The Beatles.  They don't overwhelm the exhibition, thankfully (you've got the rest of the city for that).  Instead there were sections covering Liverpool's writers, artists, actors and other musicians.  It was great to see memorabilia from the likes of Willy Russell and Pete Wylie, alongside the usual suspects (though one little girl in front of me had no idea who Cilla Black was, much to her mum's horror).  There was a screen at the entrance that flashed up well known names from the city; when it came up with Tom Baker and Elisabeth Sladen, the people watching all went "aw".  Sarah-Jane really is missed. 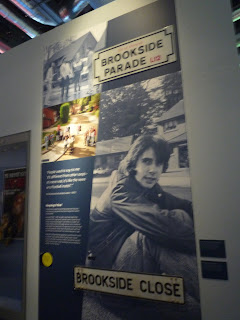 This was especially exciting for me: the original road signs for Brookside Close and Brookside Parade.  I loved Brookside.  Before I came to Liverpool, when the furthest north I'd ever been was Milton Keynes, Brookside was sacred in our house - both the evening showings and the Saturday afternoon omnibus.  It was brilliant and still burned in my brain.  The Grants, the Collinses, Heather (I still call Amanda Burton 'Heather from Brookside', and she hasn't been in it for twenty odd years).  Harry Cross' pink car.  Sinbad when he was a window cleaner.  Free George Jackson.  Sheila's rape.  The siege.  Gay Gordon.  Damon and Debbie.  The Corkhills.  The Dixons.  The Farnhams.  Sue being pushed off the top of the Parade.  Laura being electrocuted by a light switch and falling down the stairs. 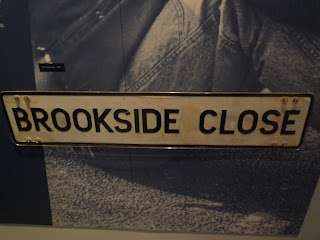 As I got to my teenage years there was the likes of Bev to keep me interested, until the ultimate arrival: the Jordaches, burying Shifty from Bread under the patio.  I know a lot of people regard this as when the rot began to set in, but it was utterly gripping television, and you had such sympathies for all the family - especially HRH Beth Jordache.  I loved Beth.  She's still one of the few women I'd turn for (it was very confusing for me when she lost her virginity to the handsome, hairy chested Peter).  Her offscreen death was a terrible, terrible decision, and I was tempted to find Phil Redmond in the museum and harangue him for it, years later. 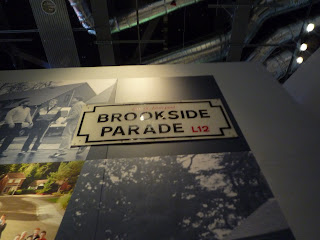 For me, the beginning of the end for Brookside was Nat and Georgia, the incredibly dull incestuous couple who were introduced purely for the OMG! value.  After that it descended into silliness, with Lindsay Corkhill dominating far too many of the story lines and the Parade being blown up every other week.  Like most of the country I stopped watching, only to tune in for the last ever episode: one of the most unpleasant tv shows I've ever seen.  The final Brookside was a two fingered salute to Channel 4, but it also managed to leave a nasty taste in the mouth of the viewer, and actually made you glad to see the back of it.  A terrible, terrible shame.  It's a tragedy there's not a place for it on Four any more - after all, what's Shameless but a soap opera these days?  And whatever its failings, Brookside was always better than the pestilent Hollyoaks.

I carried on round the exhibition, all nostalgic for Manor Park.  It really is amazing how much Liverpool has contributed to the culture of the nation.  So many famous names and works of art that have originated here.  Even the sport section was interesting - there was a bit about the Pools, which were based in the city, and this brilliant picture of a woman who'd won the top prize but wanted to keep her identity secret: 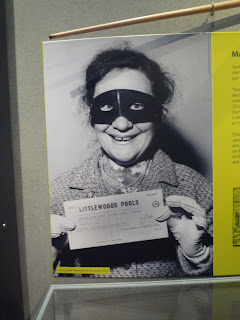 Go Batwoman!  Of course, there was a section devoted to the football, which I left the Bf drooling over while I returned to the landing.  I finally realised where I'd seen that skylight before: it's Professor Dent's cell from Dr No! 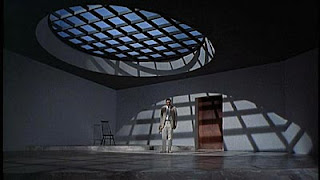 Yes, I am obsessed.

If I'm completely honest, I was mainly there for one thing: the exhibition on the Liverpool Overhead Railway, including the last remaining carriage.  Despite it being the very first exhibit brought in, the exhibition formed part of the closed off first floor, and won't be open until September.  I was disappointed, but managed to sneak a glimpse of the sealed up carriage from the landing: 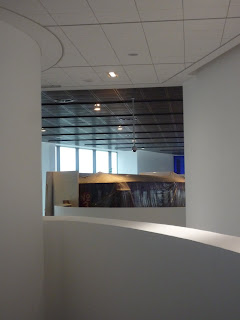 The exhibition on the ground floor, Global City, is perhaps the most disappointing: with its rundown of the city's place in the world and its links with Shanghai, there didn't seem to be much that wasn't covered by the Maritime or World Museums.  This was the part that had the least to do with Liverpool, and in my opinion, the part that had the least reason to be there. 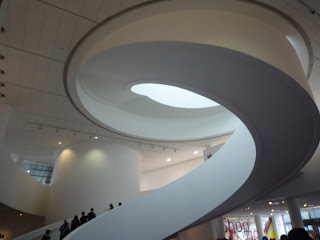 We headed outside for the opening ceremony: a six year old boy called Finn was going to cut the ribbon, but the crowds meant that the Bf and I were shoved to the back.  We listened to the speeches and applauded in the right places then headed home. 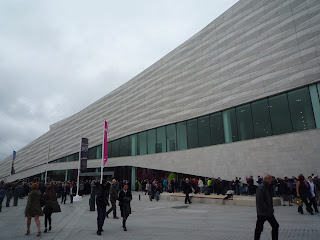 Is it worth seeing?  Absolutely.  I'm already planning on going back to have a better look (with all those schoolchildren running amok, there was no way I could get my hands on any of the interactive exhibits).  It's a great building with interesting, surprising exhibitions, and a real draw.  When the Overhead Railway gallery opens in the Autumn, it'll be even better.
Posted by Scott Willison at 16:56

I was there on Saturday evening and it was highly shambolic, with the main power failing on two occasions causing all the expensive interactive video displays to fail (along with the lifts, toilets and main lights).

Still looked very good though. Couldn't really appreciate it due to the crowds, so will go again in a few weeks when interest has died down a bit.

There were more power problems this evening too.

Scott, the skylight didn't subconciously remind you of the old Central Television logo, did it? That's what I see when I look at it.