For reasons far too dull to go into here, I found myself in Chorlton-cum-Hardy with time on my hands.  I decided not to celebrate the 4th of July in the tempting-sounding Kansas Fried Chicken and instead I went in search of tram stations. 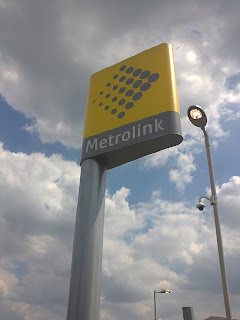 This may shock you, but I've never been on a Metrolink tram.  Speaking as an urban transport geek, even I find this shocking.  I'm not sure how it's happened.  In fact, the only tram I've ever been on in the UK is the heritage one in Birkenhead.  I've also been on the trams in Amsterdam, those rickety but charming death machines that regularly send cyclists to their doom.  And the San Francisco tram was fun too, though that was mainly because I was imagining a fire truck driven by a bimbo could come swinging past dangerously like in A View to a Kill.

I like trams.  In my hierarchy of favourite public transportation methods, they're probably right behind underground trains (and are certainly way above buses).  They're clean and efficient and quick.  They're reliable and attractive.  And they encourage people onto public transport in a way that new buses never will. 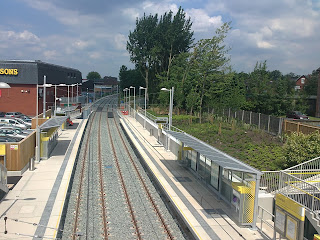 The South Manchester extension should be open by now, but it's had to be delayed by a few days; as a result Chorlton station was fenced off.  The only person in sight was an orange suited worker eating his lunch in the platform shelter.  The extension is part of Metrolink's Big Bang, which was supposed to be paid for by a congestion charge; when the city's residents rejected that idea, the government gave in and gave Metrolink the money anyway, which made it all a complete waste of time. 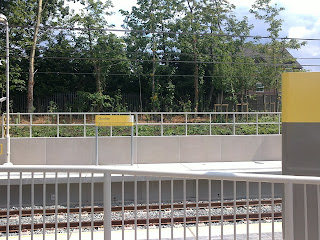 Chorlton's on the initial three stop section to St Werburgh's Road; the line will be extended even further to East Didsbury by 2013.  That the line was built in two sections just underlines how daft the funding delays were, though not quite as daft as building a route through Oldham that's going to then be taken out of action when the next phase is opened. 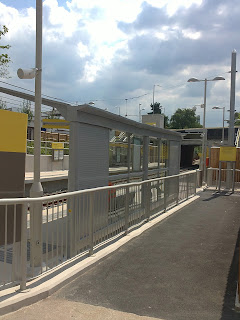 The platforms are clean and pretty and, as you may have noticed, yellow and grey.  Manchester's abandoned the former turquoise colour scheme in favour of something that's rather more, erm, Liverpool-flavoured.  I like to imagine that the Colour Tsars realised they'd painted everything they possibly could on Merseyside and came flooding over the border into Greater Manchester, beseiging the Town Hall until they gave into their demands.  First Liverpool, then Manchester, next - West Yorkshire!  Every PTE will be theirs in the end!

It works though.  The turquoise was always a bit naff, and since Arriva Trains Wales turned up, completely devalued.  And the M in a circle logo was horribly dated even when it opened.  Grey dots in a sort of arrowhead - much nicer.  I'm also taken with the font.  Merseyrail's stuck with the boring old Rail Alphabet font for its signs, which is a classic of course, but is still a bit dull.  Every other franchise in the UK spends a fortune changing the signs to something allied to their brand - I wonder why Merseyrail never bothered?  Imagine Bromborough in something classy like Trebuchet. 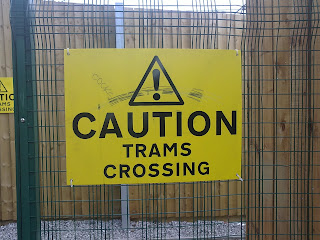 I followed a footpath down the side of the tracks to St Werburgh's Road station, the line's temporary terminus.  While Chorlton's station was in the middle of a busy shopping area, next to a Morrison's, St Werburgh's Road is on a quiet suburban street, showing another advantage of the Metrolink - the way it can really link different communities together.

The station is heralded by this yellow arch over the entrance, which I love and I think Merseyrail should steal for its own unmanned stations.  They stole the colour scheme - we can take this in exchange: 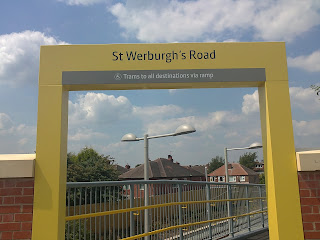 Of course, the sadness was I couldn't ride on a tram.  I had to turn round and walk back to Chorlton.  I can't pretend I wasn't jealous, and a little bit sad.  If all had gone to plan, Liverpool would have at least one, probably two, tram lines of its own by now.  Instead the government got us all excited and then refused to put out.

Liverpool's got Merseyrail, which Manchester hasn't.  An underground train line through the city centre is infinitely preferable - it's quicker, has higher capacity, and so on.  Manchester would kill for Merseyrail.  But I can't see why we can't live in a country where transport schemes stop being either/or.  Saying, "Liverpool's got Merseyrail - it doesn't need trams" isn't good enough.  Liverpool was built for trams - there are dozens of miles of wide roads with space for the tracks.  We should have a city centre loop heading to the tourist attractions.  We should have a tram connecting with the universities and the cathedrals.  We should have a fast, efficient public transport system taking people from the suburbs into town.  (And while we're at it, Manchester should have an underground of its own - it's an urban area of over a million people; it should have had one decades ago.  Have you all the buses clogging up Oxford Road?  Imagine a train line underneath all that).

It seems Merseytram is dead, though the council still valiantly tries its best to keep the planning permissions alive where it can.  It's a shame.  Seeing how Manchester is benefitting makes me wish we could spread its effects beyond TfGM's borders.

In the meantime, I'll have to head back sometime to actually ride one of the damn things.
Posted by Scott Willison at 14:07

I've always thought that it was daft to have two separate PTEs for the Liverpool-Manchester conurbation. Maybe that view is coloured by having grown up near the border where it was only too clear that each PTE tried very hard to forget each other's existence (Merseytravel's 'beyond county boundary' concept comes to mind here), but I still believe that the region is far too important to have organisations working towards different, and potentially conflicting, priorities.

I really wish the colour Tsars would head to West Yorkshire. Even black and yellow would look better than their dull colours and logos.

And while we're at it, Manchester should have an underground of its own

Now is a good time to mention the aborted Picc-Vic scheme.

What a fantastic Wikipedia page. It looks like even The Champions were keen on the idea of rapid cross-Manchester underground transit.

The Picc-Vic is one of the great lost projects. A tram across the city centre just isn't the same. I'd love to see the skeletal remains of it under the Arndale - such a lost opportunity.

And yet, having said that, the Picc-Vic was still just one tunnel and five stations. It was just linking two existing rail lines. Why can't we build a proper metro line across the city, opening up brand new routes? Bilbao did it, and that's nowhere near as large as Manchester.

Minor correction on the 'government caved' basically the story was there was a very large pot of grant money (around £8bn in total for schemes between 2005-2015) for councils specifically outside London which introduced congestion charging, and GM had a bid for £3bn approved by the government. Liberal-Tory and public opinion in Greater Manchester was quite firmly against however after a campaign that scaremongered the charge area would eventually be expanded to all the town centres too and forced Labour to hold a referendum on the charge and it was rejected 4-1, all the other councils around the country which were planning or had already submitted applications for C-Charge grants withdrew them. This grant pot was then redirected to plug the Crossrail funding gap and ended up as the Governments half of the £17bn bill.

The GM Councils however got together and decided they still wanted these transport schemes and were willing to work together to get the most needed so it was agreed that all the councils would raise their council tax by 3% and pool the money into a central pot for schemes called the GM Transport Innovation Fund, this raised around £800m. Still nowhere near the needed amount they also went to the Department for Transport and asked if they could get their share of the Regional Transport Grant (this is an annual grant for transport schemes divvied up to counties according to population) for the years 2010-2018 pre-assigned to the TIF as the TIF projects constructions would run from 2010-2016. The Dft agreed and so GM got the £800m it would have recieved anyway assigned to the schemes. The downside of this means that it will be 2018 before GM can apply for money from the Regional Transport Fund again.

Anyway this raised in total £1.5bn which was enough for around 4/5ths of the Metrolink schemes and a couple of the planned road schemes to go ahead. The Trafford Metrolink line, Stockport Metrolink line and most of the road schemes unfortunatley had to be cancelled.

So long as it was just a *minor* correction ;-) Thanks for clarifying that for me. I wrote mainly as I'd seen it unfold from the outside, and obviously I wasn't fully appreciative of the ins and outs.

I wouldn't swap the trams for anything, though I would like to change the colour. Preferably red and cream with the Manchester coat of arms.

But Liverpool should have trams too!

I was told that one of the reasons for Pic-Vicc being abandoned was the authorities looking aghast at the horrific cost overrun and delays that plagued the construction of the Merseyrail underground.

It's quite interesting how new underground lines get built in relatively small continental cities, very often alongside tram/light rail lines, whereas here, you can't even concieve of it outside London. Of course, a lot of these southern European countries were using EU money plus maxing on credit that's now hitting the fan (and UK taxpayers also have to pay towards these costs) but you consider new undergound lines for Liverpool, Manchester or Birmingham and people laugh at you for being in fantasy land. I always liked the idea of completely new build underground lines in the east of the city. One would go down Prescot Road, another perhaps down Breck road. These would then make a look in the city centre like the Wirral line does, giving people a good choice of downtown destinations and interchanges with the Wirral & Northern lines

Bloody hell! I used to live on Albany Road as a student, right next to where the new line is! I wondered if that Morrisons was the old Safeway store where I did most of my shopping, and it was! I remember the plans for the tram when I was up there from '96-'99, but I'm pleased to see that it's finally made it there! Of course, this means I need to visit...