So to recap: Robert and I were in Manchester, killing time between the joys of Denton and the scorched Earth of Ardwick, and so we decided to head for Manchester's Museum of Science and Industry.  It's another of those places I'd always meant to visit, but never got around to it.

We started in the cafe, because I was dying for a drink (ginger beer, before you ask: I'm not a complete alcoholic).  MoSI made an immediate play for my affections with its condiment holders made out of Lego: 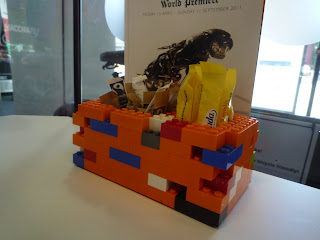 Although I should say, as a purist, that I'm not keen on orange bricks.

We headed into the museum itself.  It starts with a pretty overwhelming intro, all video screens, iPads and computers, teasing you with its futuristic modernity.

This was all, preamble, let's be honest: there was only one thing us geeks were here to see - the Power Hall.  Robert gleefully told me there were some old trains here, so we headed over there. 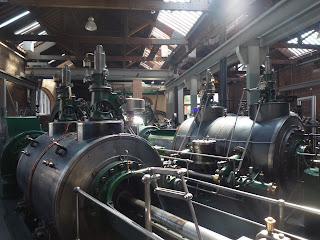 See that?  It's a pumping engine of some kind; I didn't note what type.  The reason I didn't note it was because I was SO BORED of engines.  The Power Hall traces the history of engines in tedious, mind-numbing detail, from water wheels to steam to diesel and everything in between.  And I'm sorry, but once you've seen one thrusting piston, you've seen them all.  It was just a load of bits of hissing pumps and grinding metal and I defy anyone with a sex life to find it interesting.  Good God.  I was close to sticking my head underneath one of the pounding arms by the end.

Perhaps the trains would be a bit more interesting?  The museum is, after all, built on the site of the old Liverpool Road station, terminus of the world's oldest railway line.  This is where the Duke of Wellington ended up after he opened the railway line in 1830; this is where William Huskisson was headed if he hadn't decided to take a dive under a train. 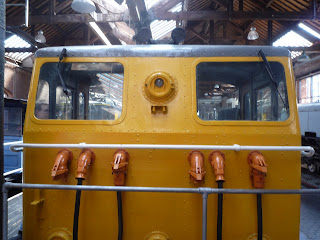 Half a dozen big, sturdy engines take up the back of the hall.  They were... trains.  Oh dear.  I've always said that I'm a stationspotter, not a trainspotter, and this exhibition underlined it for me.  While Robert snapped his photos, I was left staring at the trains and thinking how ugly they were.  Seriously. I quite liked this one because it had the NedRail symbol on the side.  That's where my interest started and finished.

It didn't help that we were being followed round the museum by a gang of Italian exchange students with no concept of personal space or decorum.  They bickered at one another while elbowing us out the way to take cameraphone shots.  Why do European teenagers look different to British ones?  These teens looked like they spent their evenings practicing disdainful pouts and trying out scarves.  They're big on scarves.  Perhaps it's to hide the love bites. 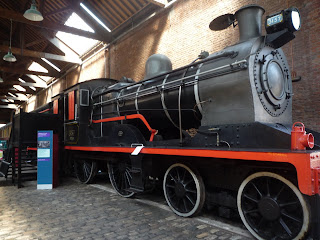 Outside was a little platform, where they operate steam train excursions from on busy days.  Not on a Friday afternoon in school term time, though.  Good benches though. 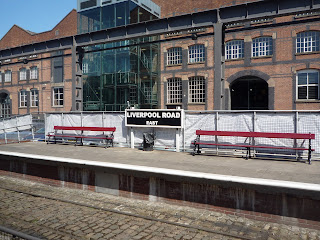 We wandered to the back of the site to the actual Liverpool Road station building, which forms the rear of the site.  The original Victorian building has been converted into museum space, and we started with an exhibition called Underground Manchester.  My hopes of an exhibition about the aborted Picc-Vic scheme were dashed when we got down there and saw this: 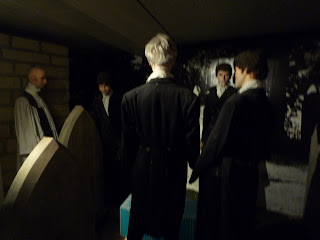 
As it turns out, Underground Manchester was actually a lengthy and detailed history of the city's sewage system.  There was a lovely smell piped in, plus a load of flushing toilets, urinals and privys for our delectation.  The undoubted highlight was the opportunity to walk down a genuine sewer: 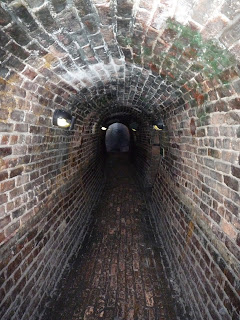 I'm being cruel.  I'm sure a lot of people would find this fascinating.  I was just feeling let down.  I'd wanted to visit this museum for a long time, and it was disappointing me.  I'd imagined it to be like the Northern Science Museum.  It was actually turning out to be something on a much smaller scale, a sadly parochial exhibition.

We finished admiring chamber pots and headed up into the main building of the railway station.  My spottery taste buds were moistened: here was where the real stuff was, the proper, world changing history.  And we found this: 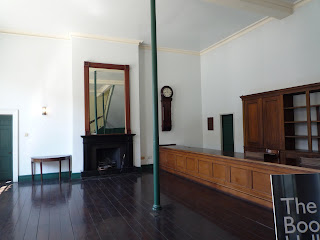 An empty, roped off booking hall.  A sign told us that they were currently looking at better ways to display this historic space, as the previous exhibition had got tired.  In the meantime, there was nothing.

I was ridiculously let down now.  There was a better preserved station at Hadlow Road, out in the wilds of Cheshire.  This was a place of truly momentous importance, one of those sites that changed the world.  The railways shrank societies, brought communities together, facilitated trade and war, and it all started with the Liverpool and Manchester Railway.  Edge Hill is a sad little station which barely acknowledges its place in history - but it's still a working station with hundreds of trains passing through every day: we have to concede that there's only so much they can do.  Liverpool Road is there, empty, ready to be properly commemorated, and it's just rubbish.  Sorry, but it is.  It's astonishingly disappointing.

Worse still, the Italian students had caught up with us.

MoSI is just not what I wanted.  I thought it would be a real, magnificent Science Museum for the North.  It's just not in that league.