I've been thinking about art. 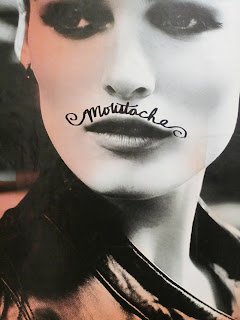 One of my favourite recent metro-related art stories is the tale of the Moustache Man.  He's been travelling all over the New York subway, writing "moustache" on posters in a distinctive curly fashion.  That's all.  I first heard of it via the lovely Sheryl over at Bitch Cakes and it struck me as a fun idea.  It's a tiny lift for commuters and travellers.  A smile.  (And one spelt the correct way, as well).

Except now the NYC Vandal Squad have arrested him and charged him with "Felony Criminal Mischief, Misdemeanor Criminal Mischief, Making Graffiti and Possession of Graffiti Instrument".  Of all those charges, "mischief" seems the only appropriate one.  It is mischevious, impish, comic.  It's a sly moment of humour and lightness.

I hate graffiti.  I hate the soulless, joyless crime of "tagging" - a wide mark of angry namechecking.  It's ugly and expensive and, worst of all, dull.  99% of the spraypainted graffiti employs the same pallette of colours and the same design of font.  The name is irrelevent - it looks like everyone else's.  Just look at some examples on Merseyrail - there's a wide spread of time there, over a decade's worth of graffiti, and yet it looks like it could have all been done by the same hand.  An artist should be expressing themselves, and their own interior personalities and souls - not trying to look like everyone else.

(And please note I'm not even going to give the banal, everyday graffiti the time of day - the inked initials, the crude genitalia, the names scratched into the train window with the tip of your compass - the tiny pains that make life a bit shittier).

So, since I hate graffiti, why am I upset by Moustache Man's arrest?  Perhaps because he was different.  There was humour and love in his work.  It was a step up from drawing a beard on Penelope Cruz and blackening her teeth.  It was imaginative and well-presented (just look at those curly letters!).  Maybe I'd feel different if I had to look at it everyday, instead of just getting edited highlights from the other side of the Atlantic; but this is a type of transport vandalism I could get behind.  Am I being hypocritical?  Probably.  I'm drawing a line between one type of art I approve of, and another I don't; I'm saying one is "good" and another is "bad", when surely they're just as valid as each other.  In fact, those spray painted train cars are a lot more work than one man with a felt tip.  I'm not an art expert by any means - just an interested bystander.

I've gone on and on about Merseyrail's Art on the Network programme, and how much I like the idea of sponsored artwork to add beauty to travel.  I don't see the Moustache Man as being much different.  He's spending a few moments each day making your life more fun.  I hope he isn't treated too harshly.
Posted by Scott Willison at 15:10

Email ThisBlogThis!Share to TwitterShare to FacebookShare to Pinterest
Labels: art

Nor do I, putting smiles, and indeed moustache's on peoples faces!

Wondered what you make of this....erm, Stickers on the Central Line:
http://stickersonthecentralline.tumblr.com/

They kind of made me chuckle, but this appears to have 'stopped' now, I understand the powers that be (London Transport),had a word,and it all came to an end :-( cheered the weary commuters up on a dreary Monday rush hour mind.

What do you think, I agree with Scott, hate Graffiti, but this is kind of fun :-)