Don't get me wrong: I love Twitter.  In the few years I've been using it I've become an addict and a devotee.  I rarely go a whole day without firing at least one idle thought out into the ether - for example:

It's all become a bit of a strain lately, though.  Some of the fun's gone out of it.  Between rape threats, calls for moderation, Russian boycotts, racist vans, Sun front pages and the continuing presence of One Direction in the Trending Topics, it's all got a bit stressful.  My timeline used to just be people tweeting their dinners and sarcastic comments about Gail Platt's hair; now the vortex of hysteria which sometimes engulfs Twitter is demanding I sign petitions or boycott the platform for a day.  Plus I follow Mia Farrow, and though she tweets a lot of great fun stuff (including the revelation that she was watching Sharknado with Philip Roth, which may be my favourite thing ever) she also regularly tells you about the latest Third World atrocity.  Bit of a bummer.

Thank goodness then, for the odd little ray of sunshine, like Tim and Andy at Northern Rail.  There's a bunch of tweeters employed by the rail company to keep passengers informed about delays and cancellations, and frankly I'd rather be minesweeping in the Afghan foothills than do that job.  Every day you have to put up with this kind of shit: 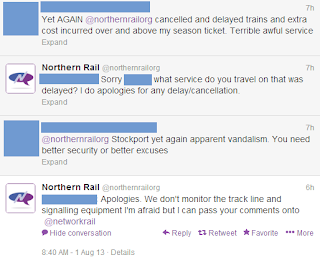 That was following a theft of overhead lines in Stockport.   I'm afraid I might have responded with something a little more direct, like "What do you want me to do?  Come down there and strap you to my back and run you to work?"

In the old days, of course, people would have just tutted and rolled their eyes and gone back to reading the Metro.  Twitter has enabled direct, one to one conversations with the rail companies in real time, and so frustrated people on the platform just start venting wildly: 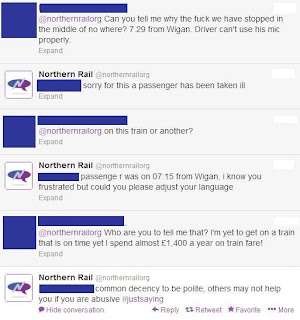 I wouldn't put up with that kind of crap.  I am a real loss to the customer service industry.

There are a whole bunch of people who do the tweeting on behalf of Northern Rail, but Tim and Andy are my favourites.  They're relentlessly upbeat, unfailingly polite, and sometimes wilfully surreal: 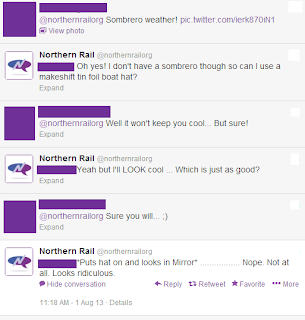 Now that's good social networking.  Engaging, pleasant and fun.  Or this one:

which is just plain camp.

I might feel different if I had to put up with cheery little gags when I'm getting drenched on a platform in Arnside because the promised train hasn't turned up, but sitting at home with a cup of tea I appreciate the moments of levity.  I can't decide who my favourite is though.  On the one hand, Andy often begins his weekend shifts with "Sunday Sunday, here again in tidy attire" so we clearly share a spirit animal.  I couldn't find an example of him actually saying it, sadly, because I went back through Northern Rail's timeline and I hit all their apologies to people incensed that they were refusing to run trains following flash flooding at Walsden and I had to go and have a lie down because RAGE.

On the other hand, I got this response from Tim: 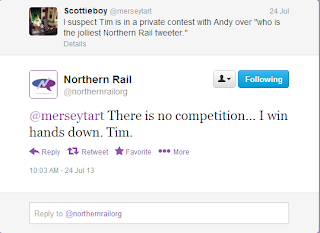 so you know: there's that.  Tim is also the one running the current #NorthernView contest:

It's a nice little competition, and he retweets the best shots, so you get a little moment of pride.  I haven't entered because I rarely take photos out the window of trains - I'm so boring that England's magnificent scenery is so much blah to me; I'm just waiting for the next station to turn up.  It seems to be something Tim's done off his own back, even though he's doomed to be unappreciated: 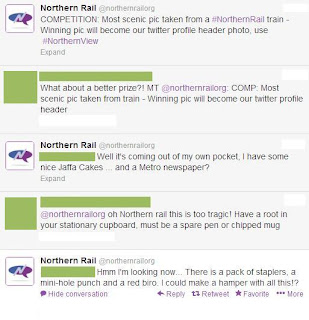 Twitter's an informal medium so it's good to have companies being friendly and a bit more "dress down Fridays", even when they're telling us that something horrible has happened.  Merseyrail's Twitter account is a lot less fun.  It's mainly used to tweet bad news - trains turning back at Hillside or the continued loop closure - so you start to think bad things when that yellow M pops up.  It's never a joke about the heat, put it that way, though now and then they'll have a competition to win tickets to see Jessie J in Chester or something, which is somehow worse.  And, worst of all, they stop tweeting at four o'clock, and don't tweet at all on weekends - they actually admit to it in their profile.  I can see why people get in a rage when they're waiting for their delayed train home and Merseyrail's front-facing services seem to have knocked off.

Yesterday, they did tweet something fun and interesting though: 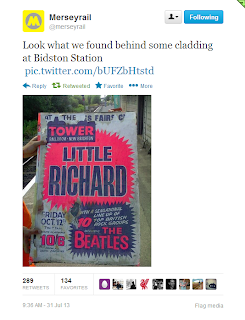 It seems that the poster dates from 1962, when the Beatles were regulars at New Brighton's Tower Ballroom.  It ended up being the tweet that was heard round the world, thanks to Scouse actor David Morrissey.  He retweeted Merseyrail's picture, and then followed it up with this: 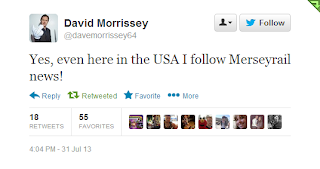 Good on you Dave; this more than makes up for Basic Instinct 2.  (And thanks to @sebpatrick for the heads up).

I love that it's been uncovered completely accidentally, and I really hope it's not going to be disposed of too quickly.  Maaaaaaaaarten Spaaaaaaaaaargaren, Merseyrail's Grand Chief Poobah, tweeted: 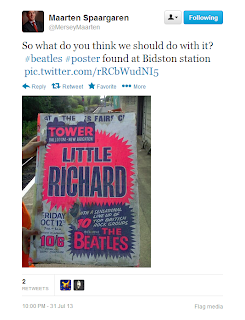 My suggestion is that they frame it and put it up in a station, either Bidston or New Brighton.  I wouldn't want it to just be handed over to the Beatles Story (who've probably got hundreds of these things) or auctioned off to some American who'll stick it in a glass case in his mansion.  Frame it and put it up on Merseyrail: make it a treat for passengers and tourists.  I'm sure it'd be an attraction in its own right; all those slightly scary Japanese tourists you see doing V-signs outside the Cavern would love it.

Of course, some people had alternative suggestions:

I used to follow a guy (@ManAtTheStation) who often wades in when people start yelling at TOC twitter accounts. I unfollowed in the end because it became exhausting and depressing to read.

I do sneak a peek at the replies feed for certain train companies sometimes though. The inanity of people's #firstworldproblems seems to be limitless.

Totally agree that these people have some real patience to put up with the crap they do. And they do it in such a polite way.

It's one of the reasons when I converse with them, I always like to say thanks! Show we're not all idiots.

I did look at my own TOC's feed once but it was too depressing. The sheer ignorance and rudeness is overwhelming, they seem to forget we are all just trying our best to do our jobs and what's more, we are human beings like them too!

I will never understand people who vent their anger at small members of the machine. Some poor sod sitting in front of a PC for eight hours is somehow responsible for everything that is wrong with Northern Rail - the trains, the timetable, the sick member of staff, the lack of platform space, the person who committed suicide somewhere outside Bradford - and so they shout and scream. It's rude, ignorant and just unbelievably horrible. I'm glad they manage to keep smiling throughout. I suppose it's "Blitz spirit". Or they're drunk. I know I'd have to be drunk.

Feel so sorry for my dad, having to put up with some of these idiots, he, a station retailer is automatically the devilish twit that causes any works/delays/cancelled trains or whatever

That's exactly what put me off working for the railways. I quite fancied being a ticket seller, sitting in my little station, issuing passes and Saveaways, but the crap I'd get hurled at me if there was a delay would send me to an early grave.