Hull is crap.  I mean, officially.  You don't come 1st in the national Crap Towns competition unless there's a reason, do you? 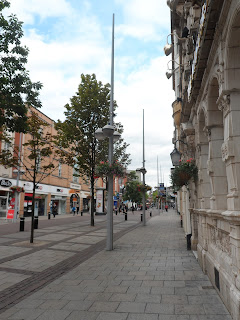 I wandered around Hull city centre and I found it interesting, charming, pretty.  There were some decent buildings.  Good shops.  Plenty of trees and monuments to stoic Victorians. 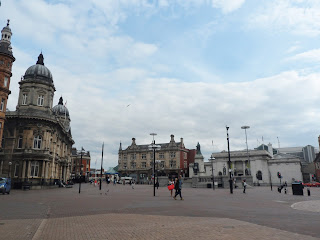 In many ways, it reminded me of Liverpool, only on a smaller scale.  Liverpool made its wealth from importing slaves and cotton from Africa and the Americas; Hull got rich off lace and sausages from Germany and Holland, so there's clearly a difference of scale here.  It's on the wrong side of the country to really profit from Transatlantic wealth, but that's ok.  It means its grandeur and memorials are a little more human in scale, a bit more modest. 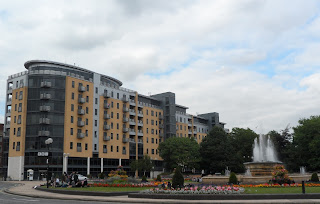 Liverpool demolished everything in the 18th and 19th centuries so it could build enormous palaces that showed off just how rich they were.  Hull didn't; it just built on what it already had.  The road layout is a bit more medieval and old fashioned, with little pockets of sailor's homes. 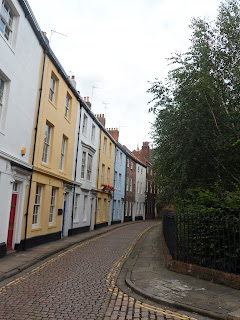 It also means that there's docks right in the centre of the city.  Ever expanding cargo demands meant that Liverpool decommissioned its old facilities and built new ones, over and over.  John Lewis now sits on top of Liverpool's first dock; the Pier Head and the Echo Arena are both built on filled in water spaces.  All the actual shipping activity moved north and south of the city to vast purpose built dock estates. 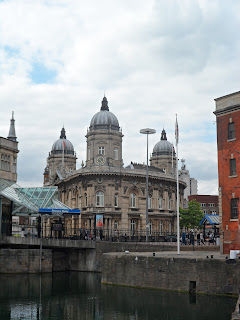 Hull still has tongues of water poking into the centre, like the Princes Dock above.  Ok, so one side of the dock has been given over to a bland corporate behemoth of a shopping centre, floor after floor of chain restaurants and a googleplex cinema, but on the other side it's still all Georgian and dandy. 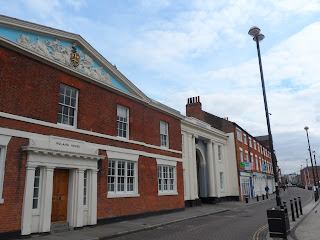 I took a promenade along the quayside, jaunty, a veritable Beau Brummel for the 21st century with my sweaty Olympic hoodie and a pair of jeans from Sainsbury's.  There were bars and restaurants, with people dining al fresco beside the water.  It's difficult to do that by the Mersey; the wind comes barrelling in and rips the top off your Mr Whippy.  If a seagull doesn't get there first. 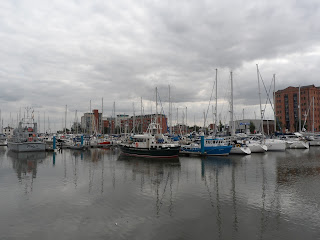 Further down the docks had been turned into a marina with smart flats and nauseatingly healthy people jogging round the perimeter in tight pants.  It felt alive and lived in, a twenty four hour place to enjoy; some of the marina developments in Liverpool's south docks are silent for most of the day.  This felt like a part of the city, not a suburb with a pond in the middle. 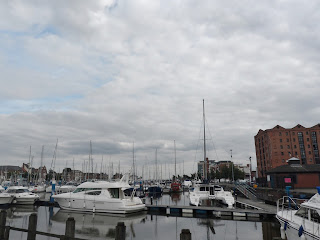 I followed the ring road behind an excitable Asian family.  They were swinging carrier bags from The Deep, Hull's massive aquarium.  The children were bouncing, full of energy and enthusiasm, and I was once again thankful that I didn't have a gaggle of six year olds to keep amused for two months every summer.  Although children today are spoilt, with day trips and theatre clubs and soccer schools; we spent our holidays sitting on the school gates taking the mickey out of passers by and watching WACaday.  There were no camping expeditions or aquarium visits for us; if we were lucky we might go and see my nan.  Did we complain?  Not at all.  Not being in school was reward enough.  Kids today, etc....

Anyway.  Hull was thoroughly bombed by the Germans, as you'd expect for a major port on the East coast.  All they had to do was nip across the North Sea; it wasn't really very far for the Messerschmits to go.  The post-war rebuilding produced some - shall we say? - interesting experiments, with bits of concrete all over the place and a surfeit of indoor malls.  There's one called the Prospect Shopping Centre, which sounds depressing in itself; something about the word "prospect" just says "Aldi, grey floors, and a general air of despondency".  In some places, however, the rebuild achieved wonders, such as this, the best BHS I've ever seen: 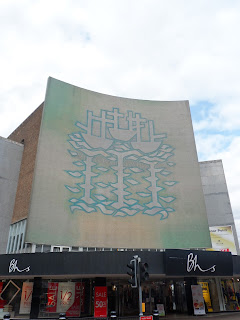 I didn't go inside because (a) it couldn't possibly have matched up to that fantastic exterior, and (b) who goes in BHS now, anyway?  Pensioners on the hunt for cardigans and slacks?  Desperate souls looking for Secret Santa gifts?  Mothers needing somewhere clean to change a nappy?  They used to be up there with Debenhams and Marks and Spencer - I got my first ever pair of boxer shorts from a BHS, underwear fans; a pair of New York Giants ones I could wear to cub camp - but now they just smell of despair and age.  It's like Littlewoods in its dying days, and we all know how that ended.  I think the rot set in the minute they stopped calling themselves the British Home Stores.  There was something reassuring and comforting about the British Home Stores, almost as if the clothes had Government approval: "this overcoat has been stamped with the official seal of Her Majesty's Department of Wet Weather Garments." 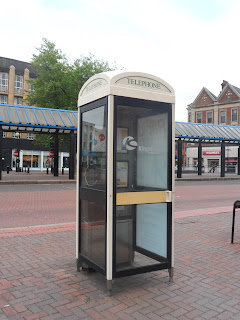 I also found one of the famous cream phone boxes, which was a tiny thrill.  It's another reason to love Hull - it's a sort of island.  Its position as the only city in an incredibly rural area makes it isolated and alone, not helped by the wide Humber cutting off any access from the south.  It's given the citizens a flinty, independent spirit.  Only Hull kept its own municipal phone network, refusing to let it get absorbed into the Post Office and, later, BT.  It's still independent from the rest of the country, though it's now been privatised; the council took the money and went on a mad spending spree, revitalising council houses and generally trying to make everything nicer for the citizens.  Hull is also the home to Hull Trains, one of the few "open access" train operators to make any money.  Hull Trains wasn't tied into any particular franchise, and existed solely to run trains between London and the city.  It was so successful it was subsequently flogged to the First Group and rebranded.

Which neatly brings me back to the railway station.  (SEAMLESS!). 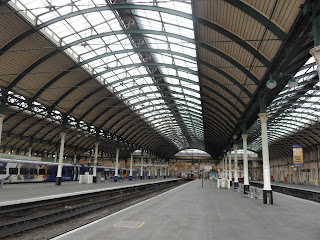 It's not actually called Hull Paragon any more, which is a terrible, terrible shame.  Hull Paragon is a thoroughly ridiculous name, and should be preserved wherever possible; the railway companies dropped the name and just call it Hull now.  The locals showed that feisty independent spirit once again, however, and when the station was redeveloped with a new bus terminal they sneakily renamed the whole complex Hull Paragon Interchange. 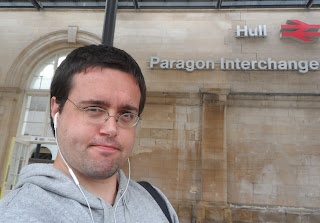 The bus station's been inserted into the space formerly taken up by train tracks, making it a genuinely useful interchange.  Double deckers whisked in and out as I watched, transferring commuters seamlessly from bus to train and back again.  The travel centre is also optimised for use by both methods of transportation, though when I went in there was a huge queue for the trains and no-one looking for bus info. 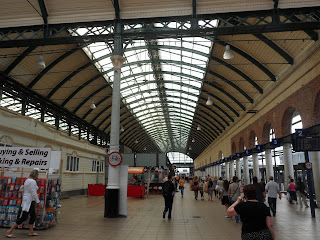 Paragon's been thoughtfully and tastefully restored all round.  The curved roofs arch over long empty platforms which have been allowed to stay that way; there hasn't been a thoughtless intrusion of Journeys Friend shops or Starbucks.  The retail's all been allowed to congregate at the front of the station. 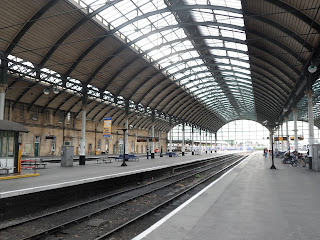 It doesn't feel crammed up there though - there's still plenty of concourse space to mill about. 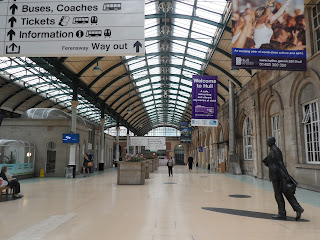 The waiting area/toilets were built in the 1980s, but they manage to avoid many of the disasters British Rail's architects inflicted upon the network in that decade.  A plaque on the inside notes that it was opened by "The Right Hon. The Earl of Halifax DL" which is just lousy.  I mean, he's not even a proper Royal; the 1st Earl was a former Conservative politician who got given a peerage even though he was an arch-appeaser before the War.  They couldn't even scrape together a cousin of the Queen or something?  Surely Princess Michael of Kent will open anything if there's a buffet.  It makes the Chuckle Brothers' recent reopening of the Cleethorpes line look like an A-list booking. 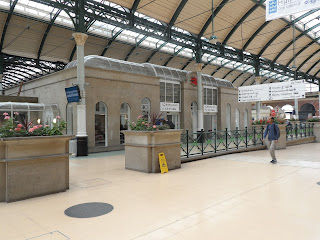 Far more notable is regular traveller, arch-miserablist and poet Philip Larkin.  He was actually born in Coventry but lived in Hull for most of his life, dying here in 1985. 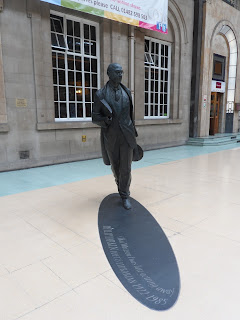 The statue is inscribed with the first line of his great poem, The Whitsun Weddings, in which he travels from this very station:


That Whitsun, I was late getting away;
Not till about
One-twenty on the sunlit Saturday
Did my three-quarters-empty train pull out,
All windows down, all cushions hot, all sense
Of being in a hurry gone.  We ran
Behind the backs of houses, crossed a street
Of blinding windscreens, smelt the fish dock; thence
The river's level drifting breadth began,
Where sky and Lincolnshire and water meet.

Larkin's reputation has suffered in recent years; many of his papers reveal him to be misogynistic, racist, and just a bit of a git all round.  I can't believe people were surprised.  This is the man whose most famous poem is This Be The Verse:


They fuck you up, your mum and dad
They do not mean to, but they do.
They fill you with the faults they had
And add some extra, just for you.

After that I'm shocked anyone bothered talking to him again; this was clearly a man who enjoyed the darker side of life.  He's not exactly Betjeman cooing over Metroland. 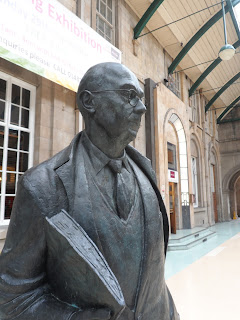 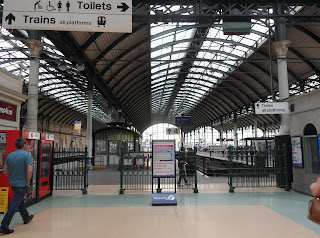 Incidentally, the following year Hull was kicked off the Crappest Town In Britain list; the trophy went to Luton instead.  I'll say no more.

My friend went to Hull uni and I visited a few times whilst in Leeds. The strange thing I found about the place was that initially you assume it'll be awful, but then you get there and it turns out to be really nice. And you leave, but a few months later you go back and for some reason you find it quite disappointing. Then you leave again and come back and this time you really hate it.

I think the problem with this city is that you assume it'll be utterly awful before you first go and then it's not so you naturally think it's great because it's wildly exceeded your expectations. But on return you realise it is terribly average, though with some interesting perks.

They could make a killing out of targeting tourists who assume it'll be dreadful though they should ensure that they never return so as to tar their memory of the place.

I'm glad to see the station's holding up. I lived in Hull for a year in the 1980s, and remember the station as dark, cavernous and characterful, but not necessarily somewhere you'd want to linger. I wish I'd lingered longer now.

Hull's city centre is much maligned, but only by people who've never been.

Observation: I'm not surprised your first pair of boxers "now just smell of despair and age".

I have to say that I often like the "bad" places better than the good ones. They have a bit of character and a bit of grit and I like that.

Would "Fokker" have been better? Or is that just a name for the residents of Pedant's Corner? ;)