Why do people cycle?  If your destination is close by, walk.  If it's not, we have cars, and buses, and trains.  Using your body to power a vehicle seems so antiquated.  The internal combustion engine is over a hundred years old now; I'm pretty sure it works.  There's no need for you to sweat and grunt - get a taxi.  Who actually wants to be wedged inbetween a Polish HGV and a 4x4, eating fumes and hoping you won't get squeezed like the toothpaste in a tube?  You'd have to be insane, or Victoria Pendleton, and judging by her histrionics on Strictly last year I'm not sure the two aren't interlinked.

Then there's the lycra.  Only two people should be allowed to wear lycra: Chris Evans in Captain America and Sir Chris Hoy, and to be honest I'm not entirely sold on that.  I don't trust any outfit that's so... form hugging.  You may as well walk up to strangers and hand them a photograph of your genitals: they've already been able to discern your religion through those tight tight shorts. 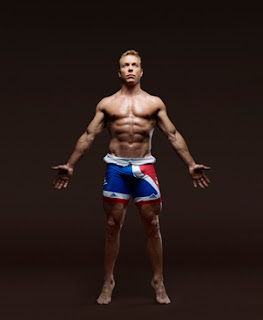 This isn't a universally held view, I know.  Andrew, for example, is currently cycling from Land's End to John O'Groats, mainly because he loves being on his bike.  My friend runs Barry's Mobile Bicycle Maintenance, servicing pedal vehicles across Merseyside.  People get very possessive about it.  You get protesters and "cyclist advocates" and men in helmets getting infuriated over rights of way.  There's the whole "eco" argument - I'm not shooting poisons into the face of children and pregnant women! - and the health angle - I could break a piece of wood between my thighs, and I my heart is so efficient it actually switches off at night.  Good for you, I say, and then go back to my footlong Subway Club.

One country that's very keen on cycling is the Netherlands, for the very good reason that it's flat.  They like bikes and hate skis.  Fair enough.  And now there's a Dutch company running our railways, they're shipping over their ideas to trial in the UK.  We've already had MtoGo shops installed in Merseyrail ticket offices, and now we're getting Bike & Go.

The scheme was launched yesterday at Liverpool Central.  It's similar to the Boris Bikes, but based around railway stations.  You pre-register, with a £10 deposit, and that gives you a card.  Present this card at a ticket office with bikes for hire and you get access to one or two bicycles for up to 72 hours.  The cost is only £3.80 a day, a pretty reasonable charge, and you can do with the bike what you will.  Just return it to the ticket office when you're done.

It's a nice enough idea, and I can see it being popular somewhere like New Brighton or Southport.  They'll be getting some of the first bikes on the Merseyrail network, along with the likes of Ormskirk, West Kirby and Hooton.  As it's an Abellio scheme, their other UK rail franchises are also getting bikes, so the scheme is getting rolled out across Northern Rail and Greater Anglia.

Good news if you're that kind of manically athletic person who can't help being healthy at all costs.  I'm not that kind of person.  I looked at the scheme and wondered, am I tempted to fork out the tenner for a card, just on the off chance?  The answer is no.  Sorry.

Firstly, England is not Holland.  Norfolk's very flat, but the North most definitely isn't.  The coastal regions of Merseyside are low lying but right behind them are high ridges and hills - have you seen the road from the beach to New Brighton station?  It's about a 1 in 3.  Walking up those hills would be one matter, but hauling a bunch of steel with me is too much.

I'd also be concerned about the security aspect.  One of the clever parts about London's bike hire scheme is you're only responsible for the bike while you're riding it.  You take the bike from one set of stands and drop it off at another.  It's held there securely in a prominent place, and when you want to go home, you can get a different bike and leave that behind.

Bike & Go gives you one bicycle and makes it your responsibility.  So if, for example, you pick up a bike at Southport station and cycle down to the prom - a reasonable use for the scheme - you're then responsible for chaining it up and making sure it's safe.  There are two locks built into the frames but I'd still be concerned about leaving it lying around.  If a bike is stolen, it's a £50 fine if the bike was locked up and you have a crime number, or £400 if you haven't.  I totally accept that I am an over-anxious person but I'm not sure I'd be able to let that bike out of my sight.

It also has to be returned to the station where you got it from, which seems like a missed opportunity.  There will be Bike & Go racks at both West Kirby and Hooton; given that the Wirral Way connects those exact two stations, it would be handy if you could cycle from one to the other and leave the bike at your destination.  Not possible, I'm afraid.

My final concern is about the idea of letting people like me on the roads on bikes in the first place.  I haven't cycled properly for about twenty years.  Being able to turn up at a ticket office and handed a bike without any kind of safety checks seems sort of odd - you're not even required to wear a helmet.  Proper cyclists can be terrible at riding.  I've seen them go through red lights, veer across the road wildly, ride on the pavement or the wrong way up a one way street.  Even Andrew, who goes out every day, forgoes a bell on his bike in favour of having his iPod blare out rock music as he passes, despite me lecturing him on how incredibly antisocial this is.  These are professionals, people who were born to have a saddle uncomfortably wedged in their nethers, and yet they are still a hazard to road and path users alike.  I estimate it would be take me about twelve minutes of riding one of the hired bicycles before blood was shed (either mine or some innocent bystander).

In short, I see Bike & Go as an interesting, if flawed experiment.  I can't help thinking back to all those green cages sitting empty on Wirral Line platforms and wondering whether Merseyrail's Dutch overseers should give up on the bikes and introduce something a little more British at the stations.  A burger stand, perhaps.
Posted by Scott Willison at 13:45

Ah, that explains the branded parking loops and shelter, that some contractors were struggling to construct, that appeared at Blackpool North this morning.

I'd agree it's a none starter. The Southport cycle hire centre is usually deserted, and the Blackpool scheme was so underused the council have killed off the previous town-wide hub type service and replaced it a heavily stripped down scheme running out of a Portakabin on the Prom. I can only think Abellio are targeting commuters on the station-workplace run, but are folk willing to part with their cash? Doubtful.

Wonder if they will be installing bike & go at Merseyrail's stations in the more 'lovely' areas, eg. Ellesmere Port, Kirkby, Bootle?

Ellesmere Port is getting them, in line with the refurbished station hall. Unfortunately the ticket office isn't open all day so there's a limited period where you'll be able to get your bike. I suspect they're thinking "gentle perambulations to the Canal Museum" rather than "wheelies outside the KFC.

No word on Bootle or Kirkby. The station buildings there are probably too small for the bike stands *cough*