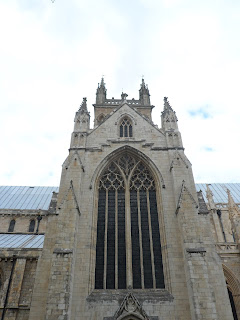 Selby has an Abbey.  I like that.  I like the little confluence of sounds - Selby Abbey.  I'm very easily amused. 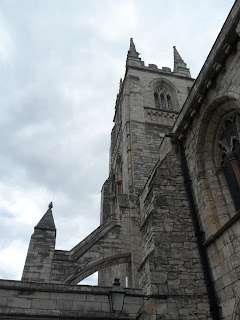 It's completely out of proportion to the town around it.  Pretty much any time you wander down a street in Selby, the abbey pokes its head over the rooftops, peering down on you.  It's a handy reminder of just how much money the Church had, and how it used that money to intimidate the peasants; the remaining building is just the nave of the old monastery - the rest was demolished during the Reformation.

It's reputed to have been founded by William the Conqueror to commemorate the birth of his son Henry in the town in 1068; it was certainly an odd place for such a grand construction.  Henry subsequently became Henry I, but his most significant contribution to British society is of course his line in the absolutely brilliant Horrible Histories song about English kings and queens:


If that isn't part of the National Curriculum now our children are doomed.

I didn't actually go into the church, for four very good reasons.


Instead I admired the exterior then wandered off into town. 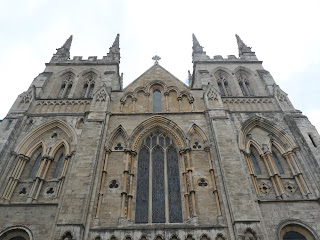 For its medieval charm, Selby was a firmly industrial town.  Yes, there was an important market for hundreds of years, but its position on the River Ouse made Selby a shipbuilding centre and port.  Coal mining also played a significant part in its growth.  It's hard to believe when you're wandering around the little streets looking in shop windows.  The town is overburdened with trinket shops, baby clothes shops, one-off clothing boutiques; places for people with just a little bit too much money to spend their afternoons. 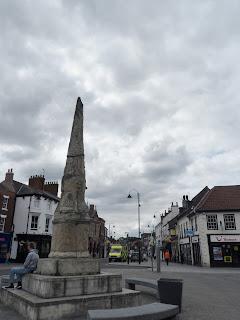 Not that the town is completely devoid of sooty-faced working class grime.  I got a bit of a shock when I rounded a corner and found a full sized flour mill right in the centre of town; it's a bit like finding an Apollo rocket in the centre of Cambridge.  Suddenly all these quaint little two storey buildings gave way to eight floors of mill.

Hovis and Allison's both have mills in Selby; all that flat land makes it ideal for fields of grain.  It was an interesting little quirk, though not as interesting as the still working tobacconists that featured a life size model of a puppy made out of cigarette packets in the window. 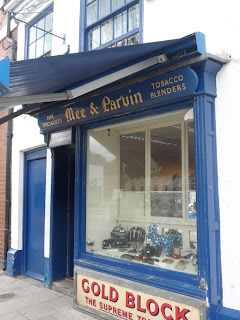 I was still in a bit of a funk, so I wandered round the town with only half an eye open.  Through a patch of green, past a little creek and children playing footie on the grass.  A cut through Sainsbury's car park and I was back on the High Street, a neat little circuit that still didn't cheer me excessively.  There was only one answer. 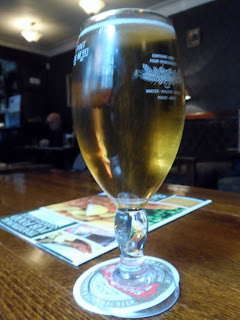 Yes, I know alcohol's a depressant, but it hit the spot.  The pub, the New Inn, had a dance floor and tv screens set up to play music videos at the weekend.  On a Tuesday afternoon, however, they were playing rock music, leading to one of the elderly patrons to enquire "Is he swearing?"  It seems that Killing in the Name had somehow been played, and after about the second chorus it was hastily faded out and replaced by some David Gray.

I sat there for an hour, slowly consuming my pint, watching the old men across the way playing dominoes, allowing my brain to resettle itself, before I headed back to the railway station.

Selby forms a fairly important junction, with trains running from here to Leeds, Manchester and King's Cross.  Its drab 1960s ticket office actually conceals a much older, much prettier station behind. 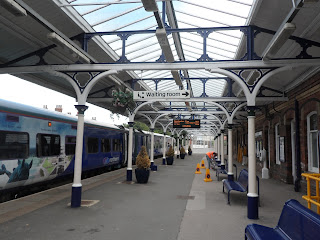 Glass and ironwork combine to make a bright, airy space.  There are two through platforms (plus a bay) and it's open and pleasant.  I imagine it would be a pretty station even in the darkest of storms, rain hammering on the glass roof. 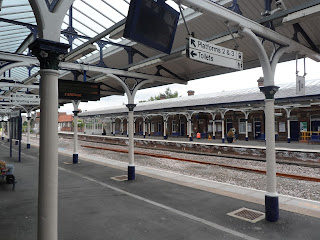 There was a trainspotter on platform one, binoculars and telephoto lens at the ready, a little cool bag with his lunch beside him on the bench.  He'd tucked himself away at the very far end of the platform, and from a distance looked like a gnome, a lucky charm the station had installed to improve its ambience.  There were other charms too: a mysterious door on platform 2 with a sign outside saying "DO NOT ENTER: Fragile floor", which made me think of "The Name of God" in Indiana Jones and the Last Crusade.  Open that door and take a wrong step and you plunge to your death at the bottom of a canyon.  There was also a British Rail-era Newspapers sign that First TranspennineExpress hadn't seen fit to replace, for some reason.  I like to imagine it's because they have an appreciation for the lost world of the pre-privatised railways, but it's actually more likely that someone's forgotten about it.  You can't buy newspapers on Selby station, anyway; there's a coffee shop in the waiting room but that was closed when I got there. 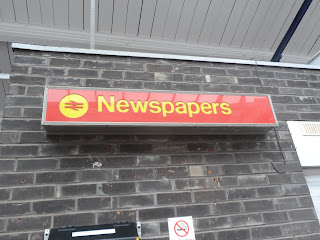 The bridge at Selby used to be a major pinch point on the East Coast Main Line, until the National Coal Board paid for a diversionary line around the town so they could exploit the coalfield further.  The bridge is still there, and in desperate need of repair works, but Network Rail have delayed them for the near future; after all the problems following the Hatfield Colliery landslip, they thought it was unfair to heap yet more travel misery and line closures on this part of the world. 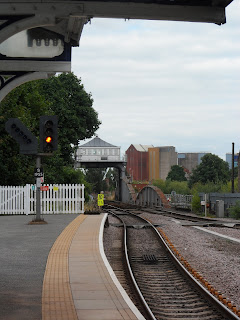 I took a seat and waited for my train back to Hull.  The platform was packed - the London train had been cancelled, according to the dot matrix indicators, and everyone looked vaguely annoyed and harassed.  Then the London train turned up, and they all looked confused.  The guard practically had to round them up to convince them that, yes, this was going to King's Cross. 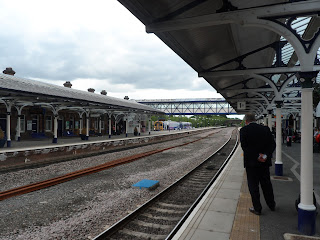 I'm sorry Selby; you seem like a thoroughly lovely little place, and I just wasn't in the right frame of mind for you.  Maybe I'll come back and give you a second viewing.  So long as there aren't any annoying Americans around. 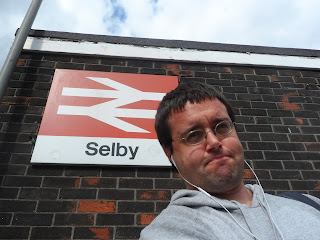 Pffft... I was born and raised in Selby and my wife is American, so I suppose I should be a little annoyed at you... but I'm not: don't go back, you won't be any less vexed! ;-)

Please refer to my previous blog post - http://www.merseytart.com/2013/08/down-down-deeper-and-down.html - I was not having a good day! I'm sure it's lovely really...

Oh! I just read that entry- poor thing, you had a horrible day and I'm sorry! Selby must have been an awful let down...

I used to love doing that kind of thing: picking a distant, potentially interesting and historical location and trying to get there (and home again!) by train/ foot.

In 1995 I remember reading about Kingmoor marshalling yard near Carlisle and it being one of the largest in Europe when it first opened. Of course, I had to see it for myself (just because), except that it's in some remote village way North of the city with a very infrequent bus service.

Guess who walked/ staggered most of the way from Carlisle and then suffered the same mild delirium at the potential of missing the last return train that went somewhere close to home...!

Sorry to ramble, I'm very glad I stumbled across your blog- thank you!