Oh, the Merseyrail map.  My secret love, my secret nemesis.  It gives me happiness and frustration in equal parts.

Last time I saw it the Merseyrail map was in a compromised state.  Lime Street's closure meant things were imperfect, in so many ways.  Now the whole network's open the map's been reissued. 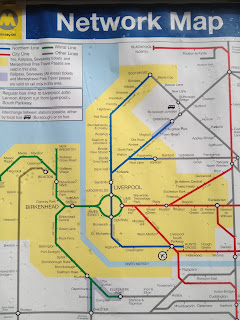 But wait!  What is this magic, mystical form at the centre of the map? 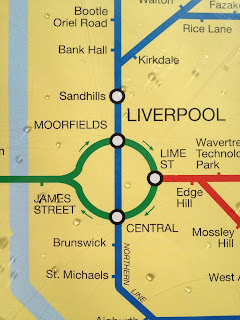 It's a loop.  A proper loop.  After all these years the Merseyrail map has finally decided to show the Loop Line as a circle.  It's the only circle on the map and it's magnificent.  That's what I like to see.  Not a misshapen circle.  Not a weird polygon.  And certainly not, not ever, not for a million pounds, not a FUCKING SQUARE.

I was ecstatic to see the above map at Birkenhead Park earlier.  I was overjoyed.  It made my day.  And then I met up for a pint with Robert, and he widdled all over my happiness. 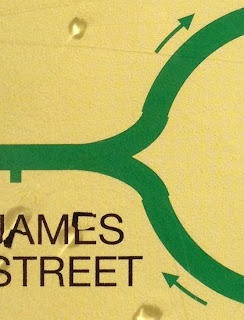 The split doesn't match up with the loop properly.  It's clunky.  It's alright from a distance, so long as you just get a quick glimpse, but the minute you look closer you see the join.  Robert spotted it straight away and he took great delight in showing it to me.  My perfect Merseyrail map was ruined.

Why would you do that?  Presumably Merseytravel and Merseyrail employ professional designers.  People with graphical qualifications.  And they're turning out maps that don't even match up.

I bet you anything this blog was instrumental in encouraging this to happen!

And maybe that slightly off bit was a printing error?

Oh we all know it wasn't. Ugh.

The "designer" formed a split in the line east of James Street, then positioned a circle so that it was nearly-but-not-quite tangential to the split lines. They then cut a bit out of the circle but didn't bother to line up and join the endpoints. I don't like the look of that bend in the line south of St Michaels either: the outer curve should have a corresponding inner curve in my opinion. Although why make the angles curved there when the joins between two lines on the rest of the map are abrupt angles? I'm tempted to redraw it myself now.

As someone once said: being a professional designer just means you get paid for it. It doesn't mean you're any good.

I, probably along with every single reader of this blog, believe that this blog was the sole reason for the 'fucking square' being changed to a circle. It wouldn't surprise me if Maarten has already read this entry and is currently writing Scott an apology for the mismatched lines.

From your mouth to Maaaaarten's ears, Dan.

A friend told me Merseyrail don't produce the map and have nothing to do with its production. It's all done by Merseytravel.